Give R.W. Baird credit: It made a bad call today, but at least it knew what it was doing.

Tic-tac-toe, three in a row, investment banker Baird endorsed the prospects of three of America's biggest water stocks this morning. Although it admitted that the stocks have high valuations, Baird nonetheless predicted that Aqua America (WTRG -0.37%), California Water Service Group (CWT -1.42%), and American Water Works (AWK 1.31%) will outperform the market over the next year, with their prices rising to $39, $50, and $103 per share, respectively. 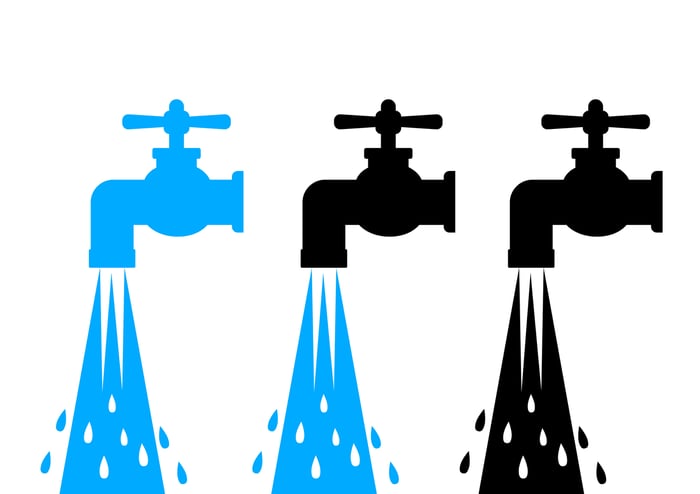 Baird offers up three potential water stock investments for your perusal. Are any of them buys? Image source: Getty Images.

Seeking a port in a storm

Given the recent turbulence in American stock markets, Baird is on the lookout for ports in which to ride out the storm. The analyst believes that the three water stocks named above fit the bill.

"[I]n a volatile market" plagued by "macro concerns which have been an overhang on other stocks," explains Baird in a note covered on StreetInsider.com (subscription required), "favorable regulatory dynamics and M&A activity should continue to drive EPS growth" among water stocks -- Aqua America, American Water Works, and California Water Service Group in particular. Because these three utilities provide an essential service (even if we're heading into a recession, people will still need to drink), Baird believes these three stocks will be "insulated from some of the macro concerns in our sector," and are "a safe haven in a volatile market."

Can high prices really be "safe"?

Some investors might question that assertion, though. Aqua America shareholders, for example, suffered a steep 15% sell-off in October after their company reported lower revenue than Wall Street had been expecting. Last month, California Water reported weaker earnings than expected, prompting a smaller sell-off. Only American Water Works outperformed on both sales and earnings. But even American Water Works could be vulnerable to a sell-off should its numbers fall short in the future.

As Baird rightly points out, the big water utility stocks are hardly cheap today. The most reasonably priced of the three, Aqua America, still costs 25 times earnings after its October sell-off. California Water costs a pricier 37 times earnings, while at 38 times earnings, American Water Works is the most expensive of the three -- and as we've seen in October and November, the stock market has been pretty unforgiving to highly priced stocks that fail to impress investors lately.

In addition to the risk of losing money should their stocks fail to execute as expected, Baird isn't promising investors in Aqua America, American Water Works, or California Water Service Group any particularly rich profits if they do perform well. At the target prices mentioned, Aqua America stock has only about 12% separating the $34 and change it sells for today, and Baird's $39 target price for California Water suggests just an 11% profit if all goes well. American Water Works -- should it hit the $103 target Baird has set for it -- would deliver less than an 8% return.

I have to say that none of this looks particularly promising. Are there really no better ideas for investors seeking the safety of investing in water utilities?

Actually, I think there may be.

Consider France's Veolia Environnement (VEOEY 1.57%) for example. With a market capitalization of just $11.6 billion, it's between American Water Works and Aqua America in price. But with $655 million in earnings, Veolia earns more profit than any of the American water majors. (Veolia is also strongly free-cash-flow positive in its business, according to data from S&P Global Market Intelligence -- a boast none of the American companies can make.) With a P/E ratio of 17, a 13% projected long-term earnings growth rate, and a 4.5% dividend yield, Veolia is arguably the closest thing to a bargain you'll find in the water stock space.

Or consider tiny York Water Company (YORW -1.01%). At just $426 million in market cap, it lacks the financial heft of an American Water Works or Aqua America. And yet, one of the keys to Baird's investment thesis was that these larger companies may aim to grow their businesses through "M&A activity." If that's the case, then York Water's tiny market cap and small debt load would seem to make it a logical target for acquisition -- or even if not acquired, York's P/E ratio of 33 means it's no more expensive than its larger water utility rivals. York is also, like Veolia, one of the very few water utility stocks currently generating positive free cash flow.

Long story short: Even if you buy Baird's thesis that water stocks in general are good options to buy in a market possibly nearing a recession, I think there are better ideas to invest in than the ones Baird is proposing. If you buy the thesis, but don't want to buy the stocks Baird recommends, take a look at Veolia and York Water stocks instead. You might like what you find.