Water stocks, particularly water utility stocks, have been having a great run in recent years. Despite most of the group pulling back beginning in mid-2016, which we can largely attribute to expectations of rising interest rates, water utility stocks turned in a good 2017.

Why the large players have a significant competitive advantage

Two of the above companies aren't comparable to the others: Companhia de Saneamento Basico do Estado de Sao Paulo, or "Sabesp," operates in Brazil, and its financial performance and stock price will be significantly affected by exchange rates because a good chunk of its debt is denominated in U.S. dollars and Japanese yen. And SJW has significant real estate operations.

Disregarding these two companies, there was a strong relationship between a water utility's size and its stock's performance in 2017. At the start of 2017, American Water and Aqua America were the two largest players, with California Water Service and American States Water tied for third. These four stocks were the best-performing in 2017. Conversely, three of the four smallest players performed the worst, with Artesian, which primarily operates in Delaware, bucking the trend. This dynamic isn't going to happen every year. In fact, the smaller utilities were the big winners in 2016. Though, as I noted in a Jan. 2017 article, that while some positive things can be said about them, "their small sizes combined with their lack of geographic diversity limit their long-term growth potential."

The bigger players are more likely to have the resources needed to acquire smaller utilities. As I've previously opined, this is a considerable advantage because the water utility industry is quite fragmented, and municipalities that operate their own water systems are increasingly selling them because they can't afford to maintain and upgrade them. 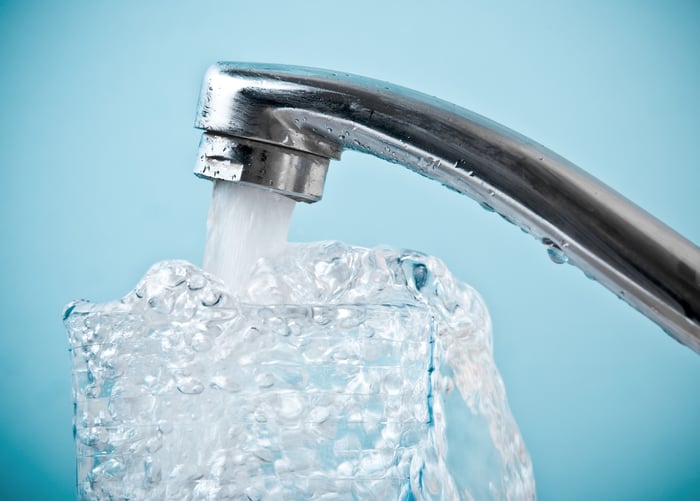 The two biggest water and wastewater utilities operating in the U.S., American Water Works and Aqua America, have been the beneficiaries of the dynamic just discussed. So, it's perhaps not surprising that they were the fourth and second best performers, respectively, in our group last year. American Water has operations in 47 U.S. states and one Canadian province, with regulated operations in 16 states, double the number as second-most-diverse Aqua America.

Two California-based stocks -- California Water Service and American States Water -- took the gold and the bronze medals, respectively. Their stocks were propelled by the companies' improved financial performances, driven by the end of the epic California drought. The drought, which began in 2011, finally began subsiding in 2016, with conditions further improving in 2017. Both companies' financials were hurt during the drought, particularly American States Water's because its regulated business is limited to California, whereas California Water Service also has regulated operations in Washington, New Mexico, and Hawaii. Their revenue was negatively impacted because of mandatory water restrictions in the Golden State, the strictest of which were lifted in June 2016. Moreover, drought conditions usually increase operating costs, which water utilities must then try to recoup through rate increases.

While the calendar has only recently flipped to 2018, water utility stocks are underperforming the market so far this year. This isn't surprising since valuations have ballooned over the last few years and interest rates continue to tick up. Further pullbacks could be ahead.

While water utility stocks might not outperform over the short term, the long-term picture remains solid: The world's fresh water supply is limited and the Earth is in a long-term warming trend, which should increase demand. Moreover, most water utilities pay dependable and increasing dividends.