No matter how you look at it, 2018 was the biggest year ever for the growth of the marijuana industry. More money was made from legal sales of marijuana -- both for medical and for recreational purposes -- than in the past. Public support for marijuana reached all-time highs (no pun intended).

So much happened in 2018 that picking the biggest marijuana stories of the year isn't easy. But there were five major developments that stood out because of their significant impact. 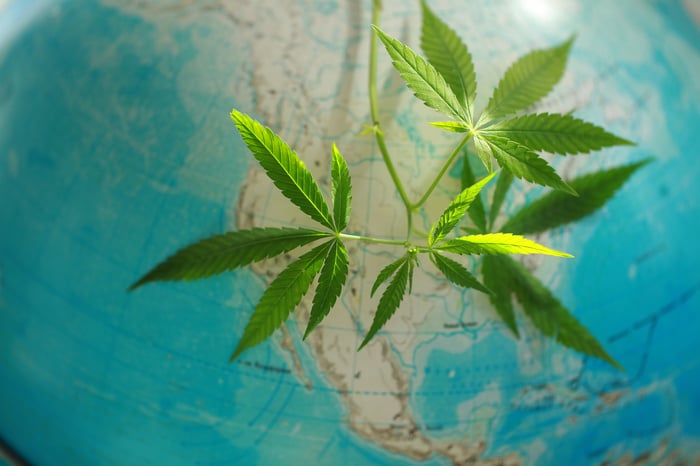 On Jan. 1, 2018, California's much-anticipated recreational marijuana market opened. There were plenty of problems early on, including sluggish issuing of licenses, burdensome tax levels, and an overly complicated regulatory system. These issues caused sales of recreational marijuana to be lower than expected. However, the California marijuana market is still the biggest in the world, with Arcview Market Research and BDS Analytics projecting annual sales of $7.7 billion by 2022.

3. Big deals in the cannabis industry

In January, then-U.S. attorney general and vocal marijuana opponent Jeff Sessions overturned Obama-era policies that prevented federal law enforcement officials from interfering in states that had legalized marijuana. This move caused concerns that the U.S. Department of Justice (DOJ) could target marijuana-related businesses. Nothing ultimately happened as a result of Sessions' action, though. And by early November 2018, Sessions had been asked to resign by President Trump. His departure led to optimism in the U.S. cannabis industry that the political environment for the industry would improve.

Perhaps the biggest lessons from 2018 are that the cannabis industry is legitimate and its opportunities are increasing -- takeaways that are underscored by estimates of what the industry could achieve.

Canada, California, and Michigan -- all of which have legalized recreational marijuana -- together represent an annual market that's projected to total more than $14.5 billion by 2022, according to estimates made by Arcview Market Research and BDS Analytics. The growing number of states and countries that have legalized medical marijuana should boost the total global marijuana market to $32 billion by 2022.

A large alcoholic beverage company like Constellation Brands wouldn't pour $4 billion into Canopy Growth if a solid opportunity for a sizable return didn't exist. Constellation bought 38% of Canopy because it thinks the global marijuana market could increase to more than $200 billion within the next 15 years.

Although Sessions opposed the legalization of marijuana, the fact that the DOJ didn't take any actions to prosecute marijuana-related businesses during his tenure may reflect the increasing realization among those in the federal government that the cannabis industry is legitimate.

There's a good chance that more big deals for the cannabis industry could be in store next year. Big tobacco company Altria (NYSE:MO) is in discussions with Canadian marijuana producer Cronos Group (NASDAQ:CRON) about a potential investment. Other transactions between beverage companies and marijuana producers could also be on the way.

It's possible that more states and countries legalize either recreational or medical marijuana in 2019. The political environment in the United States could also become even more friendly toward the cannabis industry as a result of Democrats winning control of the House of Representatives.

The biggest marijuana-related story for 2019, though, could be U.S. legalization of a type of cannabis. Significant progress has been made in resolving differences between Senate and House versions of the 2018 Farm Bill. If passed and signed into law by the president, this bill would legalize hemp in the United States. Hemp is defined as cannabis containing no more than 0.3% THC -- the primary psychoactive ingredient in cannabis.

Cannabis market researcher Brightfield Group estimates that the U.S. hemp-based cannabidiol (CBD) market could reach $22 billion by 2022 if the Farm Bill becomes law. A new market with that type of potential could definitely hold significant influence in 2019.