No other automaker -- and few companies of any kind -- get the amount of attention from investors that Tesla (NASDAQ:TSLA) receives. To fans, Tesla's charismatic CEO, Elon Musk, isn't just building great electric cars, he's inventing the future of transportation, energy, and space travel right before our eyes.

Tesla's critics (of which there are many) have a different view. To them, Musk is more akin to a snake-oil salesman of old, too often failing to deliver on his outlandish promises.

Both sides saw their respective stances reinforced in 2018, as Tesla's stock gave longs and shorts alike a wild ride (and a lot of heartburn).

For now at least, Tesla has pinned its volume hopes on the compact Model 3 sedan. Image source: Tesla.

Even by Tesla's standards, it was a wild year, one in which Musk's antics somewhat overshadowed the genuine progress made by the company as it ramped up production of its popular Model 3 sedan.

"Funding secured" and the drama that followed

Let's start with the big story, which began with this tweet in August:

Musk's tweet that he was going to take the automaker private at $420 per share was a bolt from the blue that sent Tesla's shares soaring. In the days that followed, however, it became clear that the "funding" to take Tesla private wasn't quite as "secured" as Musk had suggested.

In fact, it eventually came out that Musk's tweet was a surprise not only to Tesla's board of directors, but also to officials at the Saudi Arabian sovereign-wealth fund that Musk had apparently hoped would provide the funding. Seventeen days after his initial tweet, Musk conceded that Tesla wouldn't be going private after all.

The Securities and Exchange Commission (SEC) sued Musk and Tesla, alleging that his initial tweet and his statements in the following days amounted to securities fraud. The case was settled, but at a cost: Musk and Tesla each agreed to pay $20 million in fines, Musk had to step down as Tesla's chairman for three years, and the company agreed to a series of corporate-governance changes. 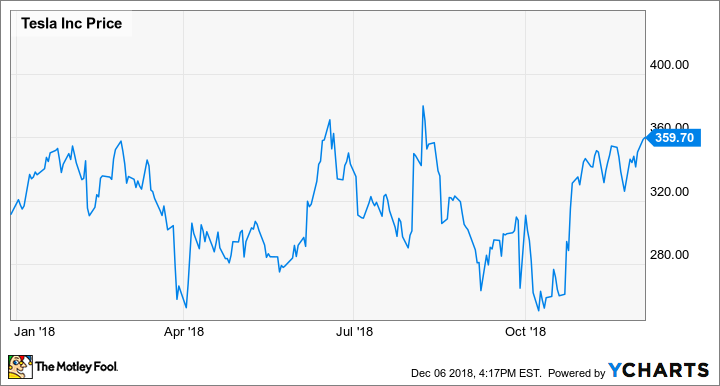 Musk's shenanigans notwithstanding, Tesla continued to make real progress in 2018. The company steadily increased production of its Model 3 sedan, delivering 9,766 in the first quarter, 18,449 in the second quarter, and 56,065 in the third. It expects to deliver even more Model 3s in the fourth quarter.

Meanwhile, deliveries of Tesla's older and more expensive models, the Model S sedan and Model X SUV, have remained steady at around 25,000 combined per quarter. Tesla expects that pace to continue through the remainder of 2018.

Having apparently cleared much of the demand backlog in the United States, Tesla has started taking European orders for the Model 3. While the big Model S and Model X haven't sold all that well in Europe, the Model 3 might, given that its smaller size could make it a better fit for European roads.

Will 2019 be the year that Tesla finally gets past all this?

After this roller coaster year, a question remains: Is Tesla finally past the "start-up" stage? There are still concerns. The company doesn't have a lot of cash, and it has some big debt repayments coming due, including one in the first quarter of 2019. There are worries about the quality of Model 3s as well, with problems including frozen door handles suggesting that Tesla might have skimped on cold-weather testing in its rush to get the vehicle into production.

But if Musk can stay focused and listen to Tesla's manufacturing experts, if the global economy remains reasonably strong, and if the Trump administration doesn't throw any new tariff wrenches into the works, 2019 might be the year Tesla finally gets past its perpetual-crisis mode.