Please ensure Javascript is enabled for purposes of website accessibility
Free Article Join Over 1 Million Premium Members And Get More In-Depth Stock Guidance and Research
By Keith Noonan - Dec 10, 2018 at 9:24AM

A big quarterly earnings beat and indications that its business could be stabilizing caused Changyou stock to post big gains in November.

Shares of Changyou.com ( CYOU ) gained 46.9% in November, according to data provided by S&P Global Market Intelligence. The company's stock climbed following third-quarter earnings results that came in well ahead of expectations and some promising guidance for the current quarter. 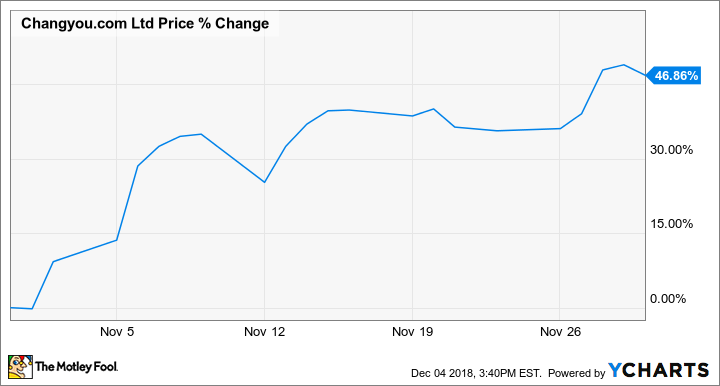 Even with the big stock jump in November, the Chinese video game developer's stock is still down nearly 50% year to date. Declining performance for the company's key online game franchises has led to big sales and earnings declines, but its stock has been trading at very low multiples for its industry, and signs that the business could be stabilizing sent shares soaring last month.

Changyou's third-quarter sales fell 29% year over year to land at $118 million, but the decline was better than the company's guidance had suggested, with management having previously expected sales to come in between $100 million and $110 million. Non-GAAP (generally accepted accounting principles) net income for the September quarter also came in well ahead of the company's guidance, with profits of $55 million for the period more than doubling management's midpoint net income target of $22.5 million and representing a welcome improvement from the $5 million loss the company recorded in the third quarter of 2017. Excluding one-time benefits from the sale of some movie-advertising assets, non-GAAP net income for the period came in at $31 million -- still soundly ahead of the company's target.

A reshuffling of the Chinese regulatory agencies involved in approving entertainment content for release has put a halt to the issuance of release licenses for new video games. That raises some additional uncertainty about Changyou, which is depending on its pipeline of upcoming titles to reenergize its growth engine. The country's government has shown that it plans to play an active role in shaping its entertainment industry, but it's likely that the suspension on new game releases will prove to be temporary. The Chinese government has recently formed a new ethics committee to review online games, so it looks as if licensing could resume in the near future.

Changyou expects sales for the fourth quarter to come in between $110 million and $120 million, representing a 20% year-over-year decline at the midpoint of the target. However, that guidance indicates that the business could post sequential sales growth for the current quarter, which suggests that sales for the company's online games are stabilizing and that its movie advertising business is rebounding. Non-GAAP net income for the period is expected to come in between $23 million and $28 million, down from $34 million in the prior-year period. Shares trade at roughly 11 times this year's expected earnings.