Shares of Uxin (NASDAQ:UXIN), the Chinese online used-car platform, were surging for a third session in a row following last week's announcement of a new strategic partnership with Taobao, one of Alibaba's (NYSE:BABA) online shopping malls.

After two straight days of massive gains, momentum from day traders and a short squeeze seemed to be pushing the stock up again today. After gaining 64% over the two previous sessions, the stock tacked on another 17.1% as of 11:27 a.m. EST. 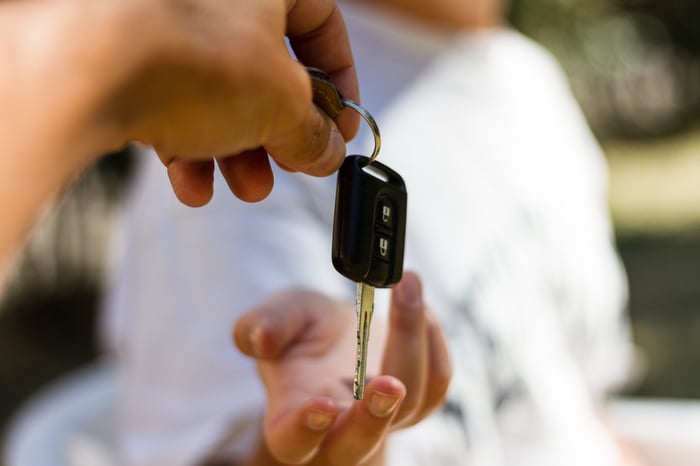 Investors applauded the news that Uxin and Taobao would jointly establish an online used-car shopping mall on Taobao Marketplace. The two companies will also work together in areas including integrated supply chain and used-car loan facilitation. The partnership should allow Uxin to extend its leadership of the fast-growing online used-car market, as the company already commands a market share around 40%.

Though the news is already four days old, the stock continued to gain today in part due to a short squeeze, as nearly half of Uxin's float had been sold short. Short-sellers seemed to pile into the stock, as Chinese names have widely fallen on trade tensions recently, and Uxin had lost nearly 70% of its value since its IPO at $9 in June. However, they rushed back to close their position after the announcement with Taobao. After the rally, shares have nearly doubled over the last three days after closing at $2.86 on Dec. 4.

The volatility in Uxin shares is likely to continue as short-sellers and day traders sort out their positions. However, the Taobao deal should be a significant long-term driver for Uxin, which was already seeing blistering growth before the announcement, as revenue was up 60% in the most recent quarter. Considering the stock is still down more than a third from its IPO price, this rally could easily continue, especially as it gives Uxin the backing of China's foremost e-commerce company and placement on one of the biggest e-commerce sites in the world.