Shares of New Age Beverages (NASDAQ:NBEV) jumped for the second day in a row today as investors moved back into the maker of cannabidiol-based beverages.

Though there was no specific reason for the stock's gains, a combination of items including an acquisition last week, bullish industry sentiment following Altria Group's deal with Cronos Group, and a short squeeze seemed to drive its jump today. The stock closed up 7.9%, after gaining as much as 16.7% earlier in the session, and adding 7.5% yesterday.

Investors cheered last week when New Age said it would acquire Morinda, a "healthy beverage" company with trailing revenue of $240 million and strength in the Asia-Pacific region, where it generated more than 70% of its revenue last year. New Age will pay $85 million for Morinda, giving the company and its new portfolio of cannabidiol (CBD) beverages exposure to China and the rest of the Asian market. New Age shares gained 9% on Dec. 3, the day the news came out. 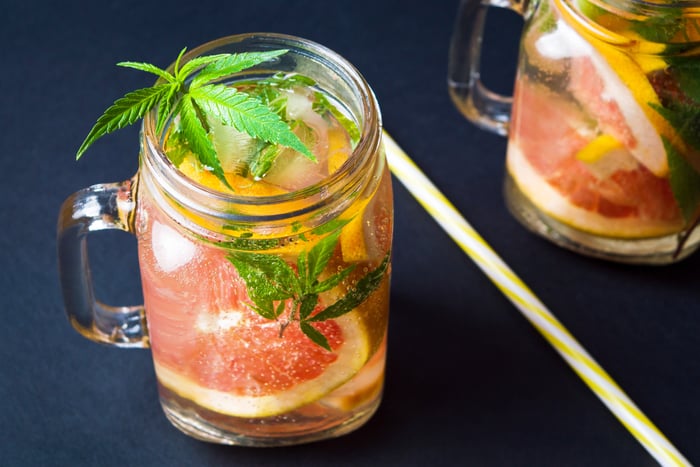 Then last Friday, Altria, the parent company of Marlboro, said it would acquire a 45% stake in Canadian marijuana grower Cronos Group for $1.8 billion, placing a big bet on the fast-growing cannabis market. That news seemed to stoke hopes that New Age would find its own "dance partner" in the form of an investment from a large beverage maker, as New Age looks to expand the reach of its CBD drinks.

Finally, a short squeeze may have been pushing New Age shares higher for the second day in a row -- 27% of the stock is sold short, so a gain in the stock tends to promote more buying as short-sellers rush in to cover their bets.

Like other marijuana stocks, New Age has attracted its share of bears, and the stock has been highly volatile since the company made a move into CBD in September. Shares have now nearly doubled since bottoming out at $3 each in mid-November, but much of the bullish sentiment seems to be based on the company's CBD beverages finding a wide audience. The Morinda acquisition gives New Age more stability and a stronger core beverage business, but ultimately the stock will fly or die with its CBD bet. At this point, that remains a big risk.