While it was able to fend off the restaurant slump longer than most, the past year has proven that Dave & Buster's Entertainment (NASDAQ:PLAY) isn't immune to the trend away from eating out that is sweeping across the country.

For a while, the company's unique mix of food and high-margin games offered a buffer -- and differentiation -- that kept customers coming back for more. But competition from similar destinations, along with declining traffic at the malls where many of its restaurants are located, has finally caught up with Dave & Buster's. 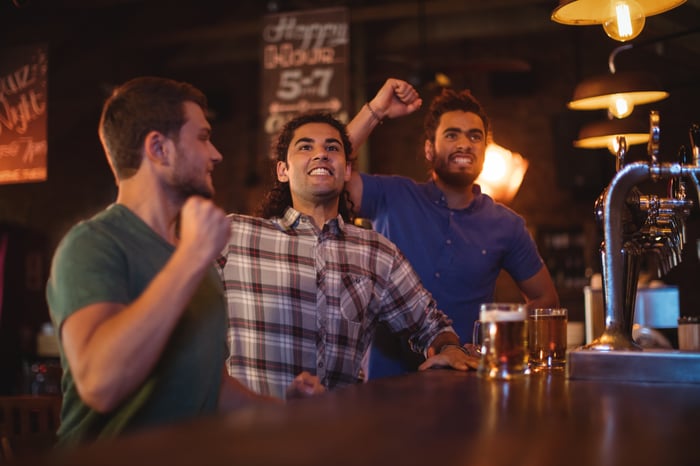 Before we dive into the details of the company's quarter, let's take a look at the headline numbers.

Management pointed out that on a constant week-by-week comparison from last year, the results were even better. Revenue would have risen by 15%. Perhaps more importantly, earnings would have been up significantly from the $0.22 per share Dave & Buster's earned during the exact same time frame last year: 36%, to be exact. The discrepancy is because fiscal 2017 had a 53-week calendar, and the week that was shifted out this year had meaningfully different results.

The real story: Slower traffic in the stores

But the gold standard for restaurants is comparable-store sales, or comps. This metric represents year-over-year changes in the amount of revenue generated by existing stores. Because Dave & Buster's increased its footprint from 101 to 118 stores over the past year, it's important to monitor comp sales growth. Without that, the company's rapid expansion would make revenue growth look more impressive than it really is.

For perspective, here's a summary of the chain's comps since mid-2014. 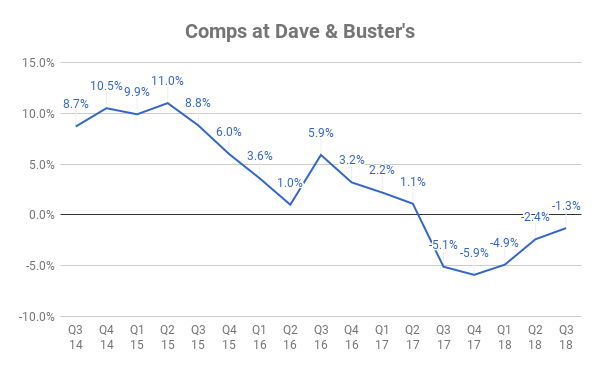 While negative comps aren't great, this quarter's 1.3% decline is definitely a move in the right direction. It's also in line with management's forecast of low-single-digit comparable-store sales declines for the full year.

Dave & Buster's amusement category -- the games that kids and adults alike play before and after eating their food -- actually did quite well, with comps up 1.5%. But comps for the food and beverage category fell 5%: a rather dramatic slump.

The main culprit was slower traffic. Walk-in traffic was down 0.7% on a comparable basis, but the big story was that special events traffic fell 6.9% on a comparable basis. Speaking on the conference call, CEO Brian Jenkins said, "[W]e did not put enough emphasis on sports viewing as we skip the All You Can Eat Wings promotion that we ran last year during the first six weeks of the season."

In other words, the company was caught off guard by the drop in traffic during the football season, and tried to correct for the lack of an All You Can Eat special by throwing one together late in the quarter.

Management remains upbeat about the chain's ability to continue expanding in the year ahead. It said it plans to add 15 to 16 new stores in 2019, which would represent 12% unit growth for the year.

For the fourth quarter, revenue is expected to come in at a midpoint of $316 million. If Dave & Buster's hits that target, it would represent year-over-year growth of 3.6%, which is a fairly low number given the company's expansion. However, it is easily explained by the fact that the fourth quarter will have one less week than it did in 2017.

Investors were likely disappointed by the company's preliminary forecast for 2019, which interim CFO Joe DeProspero shared, saying: "Overall, we expect revenue to grow high single digits and EBITDA to grow mid-to-high single digits. This expectation reflects margin compression primarily resulting from continued wage pressure and a rising mix of new stores that ... have lower [volume] and margins compared to our existing stores."

Management hopes that a continued focus on the in-store experience and the release of the chain's second proprietary VR game (Dragonfest) will prove to be huge boons for Dave & Buster's in the holiday quarter.