Apple (NASDAQ:AAPL) designs its own applications processors for its iPhone product line, but today it relies on third parties to provide it with cellular modems. For a long time, Apple exclusively used chips from Qualcomm (NASDAQ:QCOM), then added chip-giant Intel (NASDAQ:INTC) to the mix in 2016 with the launch of the iPhone 7-series devices. Then, in the iPhones that Apple announced back in September 2018, Apple cut Qualcomm out entirely and instead, opted to use only Intel modems.

Intel's sweeping of the iPhone modem orders for the current product cycle was a boon for Intel, which saw its cellular-modem revenue grow 131% last quarter and is weighing on the performance of Qualcomm's chip business. 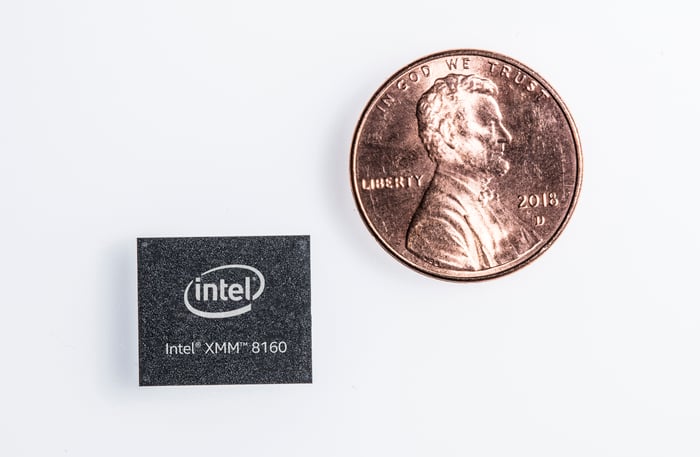 Although Intel's modem business is set for some good times in upcoming product cycles, that party may soon come to an end. Let's take a closer look.

Apple's rolling its own

On Dec. 12, The Information reported that Apple is working to roll its own cellular modem. Here's the key text from the report (which sits behind a paywall):

In a job listing posted a week ago, which hasn't previously been reported, the company said it is looking for a cellular modem systems architect to work in its San Diego office. And a person briefed on Apple's plans confirmed that the company, indeed, has an an active project to build its own cellular modem chip, which connects Apple's phones to the networks of wireless carriers. Due to the complexity of the chip, it could take Apple as long as three years to ship iPhones with them, analysts said.

Cellular modems aren't easy to develop and bring to market, but Apple has an extremely large and growing research and development budget and has successfully developed capabilities in other areas of semiconductor engineering including things like CPU cores, GPU cores, artificial intelligence processors, and power management chips.

Today, the vast majority of Intel's cellular-modem revenue comes from sales of stand-alone modem chips to Apple. Intel, on its modem webpage, claims its modems are "[designed] for smartphones, tablets, PCs, and Internet of Things (IoT) devices [...]," but I imagine that if Intel gave a more granular breakdown of its modem revenue by customer, the vast majority of it would be to Apple.

If Apple ends up successfully developing cellular modems worthy of the iPhone, then I could see one of a number of scenarios playing out. The first is that Apple just removes Intel completely from the iPhone supply chain once its own modem technology is ready and washes its hands of Intel. In that case, it becomes difficult to see how the chip giant can continue to justify the large financial burden associated with modem development.

A second potential scenario would be Apple and Intel reaching an agreement similar to the one that Apple and its power-management chip supplier reached: Apple could basically buy Intel's cellular modem assets and receive, as part of the agreement, Intel's modem engineering teams. Such an arrangement would afford Intel a graceful exit from the modem market and preserve the jobs of many of Intel's modem engineers.

A third scenario I could see is that Apple soldiers on with the development of its own modems and deploys them broadly across its iPhone lineup, but also keeps Intel in the loop as a supplier, too. This arrangement would be similar to how Samsung uses its own internally designed Exynos mobile-applications processors in some regions and Qualcomm Snapdragon chips in other regions.

This scenario would be sensible if Apple's in-house modems are stand-alone chips but would be less viable if its own cellular-baseband processors were integrated directly into its A-series chips, as iPhones with the integrated baseband processors would likely have smaller logic boards. However, Apple wouldn't be able to take advantage of that space saving because of the need to support the Intel-based models.

At any rate, if Apple were to successfully develop and deploy its own cellular-modem technology, it would be a clear negative for Intel's modem efforts.