Apple (NASDAQ:AAPL) kicked off 2018 with a massive promise: to invest $350 billion in the U.S. over the next five years. However, that headline figure was a little misleading, as it included things like a mandatory $38 billion repatriation tax payment related to its overseas cash hoard, planned purchases at domestic suppliers, and a $4 billion increase to its Advanced Manufacturing Fund, which is essentially just a vehicle to make prepayments to suppliers for said planned purchases.

But one part of the total that is undeniably an investment in the U.S. economy was a commitment to spend over $30 billion in capital expenditures in the U.S. to expand domestic operations and build a new campus focused on technical support. In January, Apple said it would provide more details "later in the year." It just did. 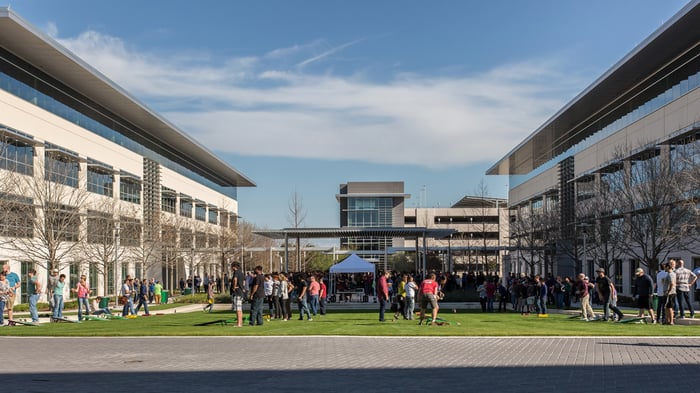 The company announced today that it will spend $1 billion building the new campus in Austin, Texas, where Apple already has a very large presence. The tech titan's current Austin campus is its second-largest, with 6,200 employees. The new 133-acre campus will be about a mile away from the current campus, and will accommodate another 5,000 workers with room for an additional 10,000 over time. Apple says it expects to eventually become the largest private employer in Austin.

While Apple had originally said the new facility would primarily be focused on technical support, the company clarified today that new employees will work across various functions, including engineering, operations, finance, R&D, and sales. Apple earlier this year achieved the momentous goal of powering 100% of its global operations with renewable energy, and the new campus will likewise be completely powered by renewable energy.

The news contradicts Apple's statements from earlier this year. Not only did the initial announcement say the new campus would be in an entirely new location, CEO Tim Cook had specifically said it wouldn't be in either Texas or California. Apple's change of heart likely has to do with a $25 million grant and local tax abatements that Axios reports the company is receiving.

Beyond Austin, the Mac maker also says it will be expanding operations in other regions, including Seattle, San Diego, Culver City, Boulder, New York, Boston, Portland, Pittsburgh, and Miami. Over the next five years, Apple is planning to invest $10 billion in domestic data center infrastructure, of which $4.5 billion is expected to be spent within the next two years.

It's not clear how long it will take to construct the $1 billion campus, but Apple previously forecast its fiscal 2019 capital expenditures at $14 billion, down from the $16.7 billion the company spent in fiscal 2018. Most of that capital spending tends to go toward product tooling and manufacturing process equipment, but corporate facilities and data centers are the next biggest drivers of capital investments.