Shares of refiner Valero Energy (NYSE:VLO) tumbled 12.3% in November, according to data provided by S&P Global Market Intelligence. That was worse than for fellow refiners like HollyFrontier, Marathon Petroleum, and Phillips 66, which managed to keep their losses to single digits for the month.

As the price of oil declined in November, the impacts were felt across the oil and gas industry. Shares of oil-field services companies, offshore rig operators, producers, and, yes, refiners all felt the pain as both Brent and WTI crude prices fell more than 22%. 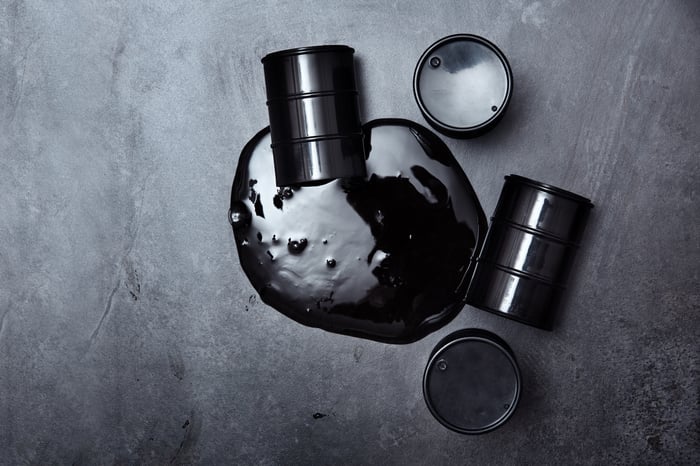 The refiners generally fared better than other subsectors of the industry because their margins aren't as tied to the ups and downs of crude oil as some of the other subsectors. Oil refiners make money on the so-called "crack spread," or the difference in price between refined products and crude oil. The so-called 3:2:1 crack spread for WTI crude only dropped 8.4% in November, a much smaller drop than that of oil prices.

But why did Valero underperform its peers? Well, in mid-October, Valero finally threw in the towel on its midstream master limited partnership, Valero Energy Partners. It announced it would buy back all outstanding units of Valero Energy Partners at a significant premium of $42.25 per unit in cash. Disappointed investors sold off the stock, and analysts at Goldman Sachs downgraded their rating on Valero from neutral to sell, citing earnings concerns. These October moves probably convinced investors to dump their shares of Valero faster than they otherwise might have in the face of a weakening crack spread and falling oil prices.

Valero wasn't as successful as fellow refiners in maximizing the value of its master limited partnership, and as a result is at a competitive disadvantage when it comes to investing in the midstream space. However, Valero is still posting good results, as evidenced by its recent solid Q3 earnings, and its continuing investments in ethanol and its Diamond Green Diesel joint venture with Darling Ingredients are positioning it well in the green energy space. The stock's poor showing in November shouldn't worry investors who are focused on the long term.