Many of the world's largest technology companies have turned some of their attention toward augmented reality (AR) over the past few years. It's been a subtle shift for many of them, but there's a good reason AR is garnering more attention: the market will be worth about $90 billion by 2022.

AR devices, apps, games, and services aren't prevalent right now, but recent moves by Apple (NASDAQ:AAPL), Microsoft (NASDAQ:MSFT) and NVIDIA (NASDAQ:NVDA) could change how quickly this tech becomes ubiquitous. The incremental steps these companies have made over the past couple of years are laying the foundation for an AR future, and investors who want to get a jump on this market should consider buying these companies this coming year. Here's why. 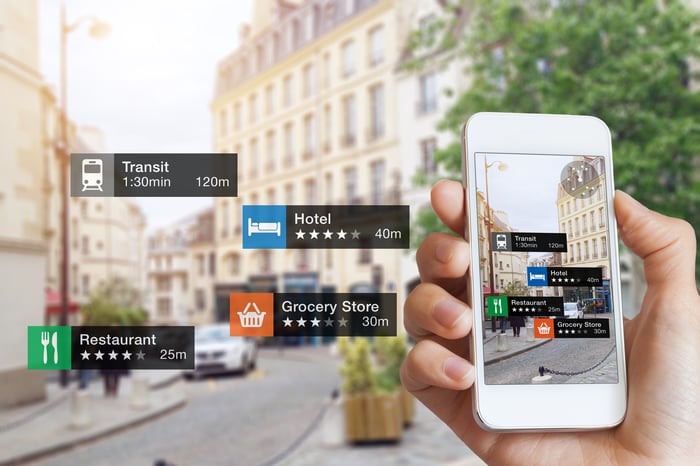 What does Apple have to do with AR? Plenty. The company has been busy building tools, through its ARKit 2, that allow developers to create augmented reality apps for the iPhone and iPad. The apps allow more interactive gaming and have practical uses too, like Apple's measuring app, which uses augmented reality to allow users to measure distances between objects.

ARKit may seem like a pet project right now, but Apple CEO Tim Cook is dead serious about his company's focus on this tech. Speaking at an event at the University of Oxford last year, Cook said, "I'm incredibly excited by AR because I can see uses for it everywhere. I can see uses for it in education, in consumers, in entertainment, in sports. I can see it in every business that I know anything about."

But the company's not likely to stop with just AR apps on its mobile devices. Loup Ventures, which was founded by longtime Apple analyst Gene Munster, believes Apple is working on augmented reality glasses that will debut in 2021. The devices will have an average selling price of $1,300 and could add $13 billion to Apple's top line within its first year.

With ARKit, Apple is slowly building out one of the largest augmented reality platforms. Getting more developers to create AR apps now would allow the company to more easily launch its glasses in the next few years by already having software and apps to make buying it worthwhile.

Just last month Microsoft inked a deal with the U.S. Army to provide 2,500 of its HoloLens AR headsets to the government, with the potential to ultimately deliver 100,000 units. It was a very significant AR deal for Microsoft not only because of the sheer number of devices but also because the deal is worth about $480 million.

Up until recently, Microsoft had only sold about 50,000 HoloLens devices. The low number is understandable because the device is primarily used by developers trying their hand at creating new AR games and apps, or companies looking to add advanced technology to manufacturing and industrial training.

The deal with the army comes ahead of Microsoft's expected revamped HoloLens in 2019. Rumors have been swirling that the second-generation device will launch later next year, and it could have more of a consumer focus than the current version. With Apple clearly ramping up its AR plans, Microsoft has every reason to make its next device more accessible to the average consumer.

Microsoft CEO Satya Nadella said last year that augmented reality is a "generational" opportunity that the company is betting on, meaning that it's a long-term play for Microsoft. That may mean that revenue and earnings from AR might not show up on the company's balance sheet for a while, but Microsoft's current moves in the space mean that the company is gearing up for its AR future. 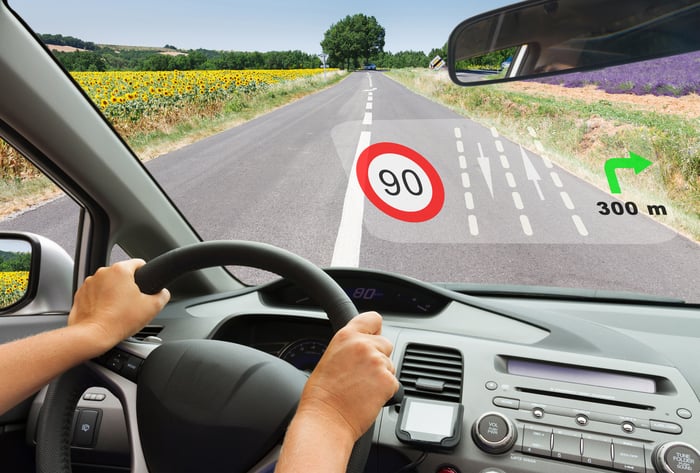 And finally, there's a quiet AR opportunity growing for NVIDIA in the automotive sector. About a year ago the company debuted its Drive AR software platform, which allows automakers and developers to use data collected from sensors and cameras on semiautonomous vehicle systems to display warnings, alerts, and other information to drivers.

The idea behind Drive AR is that cars are becoming equipped with more sensors than ever before and generating more useful information to drivers and riders, and AR may be the best way to communicate that information to them.

Autonomous vehicles are still a very new technology, but with the debut of Waymo's new autonomous ride-hailing service earlier this month and more self-driving tech likely coming in 2019, augmented reality could soon become more prevalent as these autonomous services grow. NVIDIA is already working with hundreds of automakers to help make autonomous vehicles a reality, and developing AR for those vehicles would be a natural fit.

Of course, NVIDIA chips can also be used for plenty of other AR applications outside of the automotive sector, including for gaming and AR headsets. All of which means NVIDIA's graphics processors have plenty of potential to benefit from AR in the coming year and beyond.

Remember that augmented reality is still in its infancy in a lot of respects, and it's going to take some time for these companies to see significant sales from their AR tech. That means that if you snatch up shares of these companies in the next year based on their AR prospects, you should be sure you're patient enough to hold on to them to see the AR market fully mature.