Xerox (NYSE:XRX) stock closed down 12.9% on Monday -- but apparently, not because of anything that happened on Monday.

News affecting Xerox's business in particular was sparse Monday. However, on Friday, just the other side of the weekend, it was revealed that Xerox's senior unsecured debt rating was downgraded by Moody's Investors Service from Baa3 to Ba1, a "speculative" rating. 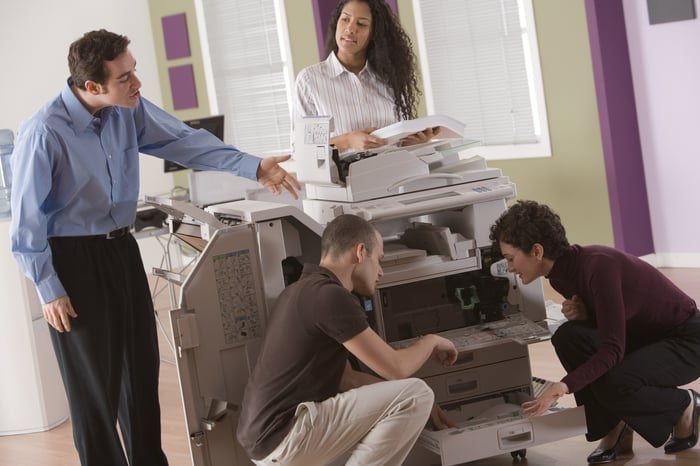 Not one to mince words, Bloomberg  noted at the time that this downgrade reduces Xerox's debt to "junk" bond status -- i.e., Xerox is no longer "investment grade." (In Wall Street parlance, when investment-grade debt is downgraded to junk, it's referred to as a "fallen angel.")

What's more, "The cost to protect against losses on Xerox debt also jumped, reaching the highest level since [the 2009 Financial Crisis]." This makes the bonds less attractive to invest in, at the same time as it raises investor worries that Xerox might eventually have to default on its more than $4 billion in net debt.

Now, before you overreact to this news: Don't. Moody's may feel less sure of Xerox's ability to repay its debt than it once was. But according to data from S&P Global Market Intelligence, Xerox is still in fact generating positive free cash flow with which to make good on its debts -- $814 million in real free cash flow generated over the past 12 months, in fact.

That may be less than half the $2 billion in free cash flow Xerox was making five years ago, but it's a whole lot more than nothing. Indeed, if Xerox continues generating cash at its present rate, it could theoretically pay off all its obligations and be net-debt-free in as little as five years.