With the markets taking a collective breather over the past three months, some investors are likely considering adding large-cap stocks -- generally companies with a market capitalization of more than $10 billion -- to try and reduce the volatility that comes with owning shares of smaller companies. With that in mind, we asked three Motley Fool contributors what large-cap stocks they liked in December, and they responded with eBay (NASDAQ:EBAY), General Motors (NYSE:GM), and Target (NYSE:TGT). Here's why.

Jordan Wathen (eBay): Though it may not be the preferred destination for new merchandise, eBay is still the place to shop for used consumer goods and unique items like antiques and collectables. The online marketplace has more than 25 million sellers and roughly seven times more buyers linking up on the site.

The business benefits from network effects, as new marketplaces struggle with the catch-22 of attracting sellers to a platform without any buyers. In recent years, some marketplaces have taken hold, with Facebook becoming a go-to destination for local sales and sites like Etsy carving out a niche as the site for unique and handcrafted items. But if you have an item with a niche audience for which more eyeballs really matter -- rare coins, vintage clothing, or a gift card to monetize -- listing the item on eBay is the way to go.

eBay has tried to move past its spot as the place to host an "online garage sale" with mixed success. Management has focused on streamlining the buyers' experience with guaranteed delivery dates and making it easier to return items.

Only time will tell if eBay can grab share in new items, but the business can generate attractive returns even if it never takes a bite out of Amazon's bread and butter, thanks to a pessimistic market that values this cash cow at just 14 times free cash flow guidance for 2018.

Not your dad's GM

Daniel Miller (General Motors): Investors looking for top large-cap stocks are probably skipping over Detroit automakers. That's fair, especially considering North America light-vehicle sales are plateauing, which generally means pain is coming for the auto industry. However, recent moves from General Motors suggest it is a much more forward-thinking company and is far more prepared to thrive in the future than it ever has been before -- and that could be a reason to consider General Motors in December.

Let's cover the couple of recent developments that emphasize General Motors' forward-looking strategy. At a time when most investors and analysts have been pleading for Ford's (NYSE:F) restructuring plan, General Motors came out of nowhere with its own plan to eliminate 14,000 jobs in the U.S. and Canada and close or idle seven factories. It's a move that should boost GM's adjusted automotive free cash flow from roughly $4 billion in 2018 to about $10 billion by the end of 2020.

Those moves emphasize two important things to me. First, the improving cash flow will enable GM to focus on investing in the future of its business, which will increasingly revolve around driverless vehicle technology and smart mobility projects -- those initiatives won't be cheap. Second, it also shows the stark difference between this General Motors and the automaker of the past. No longer will GM sell unprofitable vehicles just to hold market share, and with demand for passenger cars plunging over the past year, some of its factories in North America are likely becoming unprofitable. 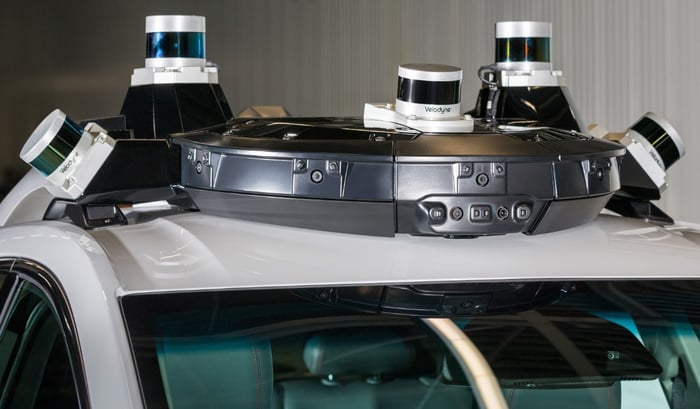 In addition to GM's restructuring plan, it also announced that Dan Ammann will soon leave his president position at GM to become the CEO of GM's self-driving subsidiary, GM Cruise. That could mean the company is one step closer to spinning off its highly successful acquisition, but it also shows how serious the company is about developing self-driving technology -- which will be a lucrative future business. All eyes will be on GM Cruise as it launches its self-driving taxi in 2019. If it's successful, the company could begin to realize its long-term value, which one analyst believes could be $43 billion already.

Ultimately, while its business will hit speed bumps as the lucrative North America market slows, GM has proven it's well prepared for the future, and that's a big deal for long-term investors.

Jeremy Bowman (Target): Retail stocks have suddenly gotten the cold shoulder from Wall Street. After the sector outperformed the broader market for much of the year, retailers have tumbled since third-quarter earnings started coming out a few weeks ago, and one of the stocks to get unfairly punished is Target.

Shares of the big-box chain fell 10% on its earnings report as investors seemed to balk at narrowing margins even though the overall quarter was strong. Comparable sales surged 5.1% on a 5.3% jump in in-store traffic, and digital sales jumped 49%, showing Target is holding its own against Amazon and executing with both its online and in-store initiatives.

That sales growth has come at a cost, as operating income actually fell in the quarter, though adjusted earnings per share jumped from $0.90 to $1.09 due to lower interest expense and a lower tax rate from the tax reform law.

However, Target is making smart decisions that should set it up to win the holiday season, including revamping its toy department, offering free two-day shipping with no order minimum or membership fee, and a range of other pickup and delivery options. The retailer should also benefit from macroeconomic tailwinds, as consumer confidence is high and the economy still looks strong. Retailers broadly reported strong results over Black Friday weekend, a bullish sign for the holiday shopping season.

With the company targeting adjusted EPS of $5.35 to $5.50 for the full year, the stock is trading at a P/E ratio of just 12.6 based on that forecast, and it offers a 3.8% dividend yield to boot. Investors who pick up some shares now could be rewarded handsomely after the holiday season.