Rapid intake of new orders bodes well for the coming quarter as well.

Healthy sales and order flow kindled investor enthusiasm for shares of global office furnishings and accessories provider Herman Miller (MLKN -0.12%), which released fiscal second-quarter 2019 results on Wednesday after the close of trading. The company is benefiting from continued global economic growth, as well as the recent expansion of its product portfolio via acquisitions. As we delve into the details of the last three months, note that all comparative numbers are presented against the prior-year quarter (the fiscal first quarter of 2018). 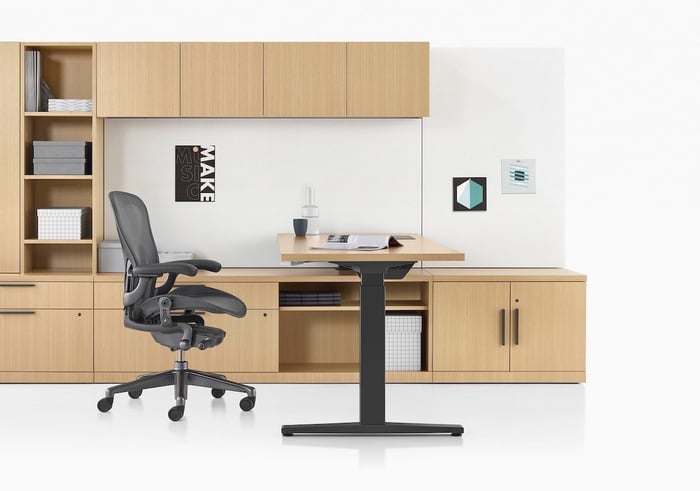 While the company has exhibited vivid growth in the first two quarters of fiscal 2019, the potential remains for external disruption throughout the year. In a discussion of current performance within the company's earnings press release, CFO Jeff Stutz addressed the global economic backdrop as well as the impact of potentially higher of import tariffs in the quarters ahead:

Adjusted earnings per share for the quarter exceeded the expectations that we established in September. Profit growth was driven by robust sales growth, well-managed operating expenses and a lower effective tax rate. In our view, the overall macro-economic backdrop for our business is supportive for continued growth, although the ultimate resolution of global trade tensions remains an outlook risk for the business. That said, our strategic focus on profit optimization was designed to help mitigate the potential for inflationary pressures and our teams have line of sight to savings that can offset these pressures.

Looking ahead to the third quarter of fiscal 2019, Herman Miller's management has outlined a revenue target of $615 million to $630 million, which translates to an organic growth rate of 7% at the midpoint. Adjusted diluted earnings per share are slated to land between $0.59 and $0.63. At the midpoint of this range, Herman Miller will exceed prior-year adjusted EPS of $0.50 by 22%. In other words, over the next three months, executives expect both revenue and earnings to maintain the year-over-year growth rates achieved in the current quarter.