SUV sales are booming, and these are the best-sellers.

Unless you've been living under a rock, you've probably noticed that SUVs are everywhere. Over the last several years, sales of "crossover" SUVs, so called because they "cross" sedan-like architectures with the truck-like functionality of an SUV, have boomed so dramatically that automakers like Ford Motor Company (F 3.68%) and General Motors (GM 2.69%) are moving to eliminate some of their traditional sedan models.

From an investor's perspective, the boom in crossover SUV sales has been a good thing: Crossovers tend to sell at higher prices than comparable sedans, earning better margins -- especially when the total sales numbers are huge.

Below you'll find the 10 best-selling SUVs in the United States this year through November. All but one is a crossover -- and that one is an iconic Jeep. 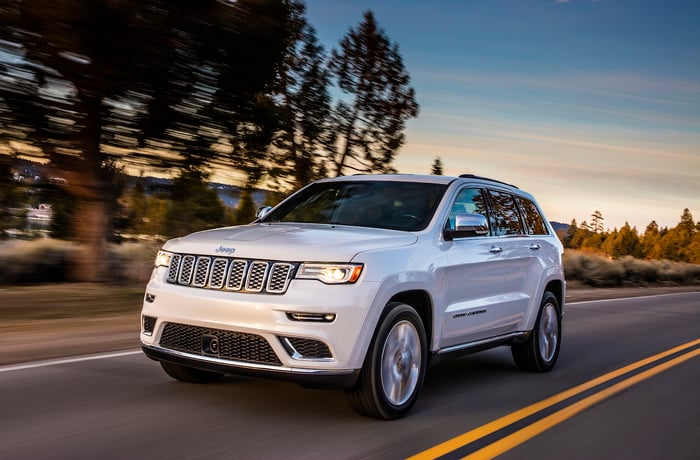 Fiat Chrysler Automobiles' (FCAU) Jeep Grand Cherokee has been around in its current form since 2011, but it's still very much a contender. The big seven-passenger Jeep's combination of roomy comfort, plush interior, smooth on-road handling, and no-excuses off-road prowess continues to draw lots of customers: There isn't really anything else quite like it at anywhere near the price point.

U.S. sales of the Grand Cherokee are down a bit (5.8%) this year through November, a reflection of the model's age -- but FCA is still selling plenty of them. 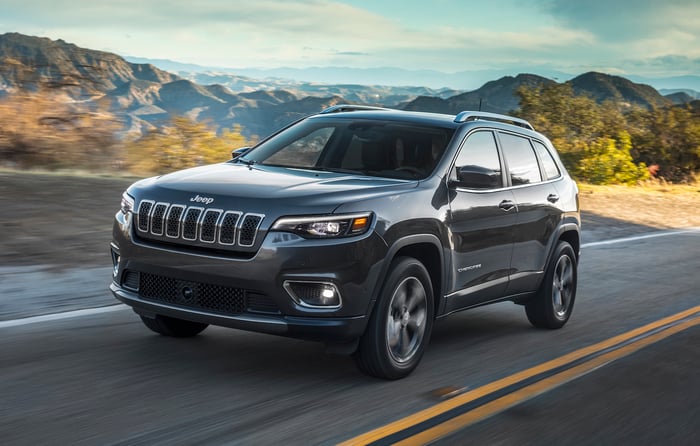 The midsize (five-passenger) Jeep Cherokee has drawn mixed reviews since its debut in late 2013. It's roomy for its size, with lots of available high-tech features and (with the right options) legit Jeep off-road prowess; but a fussy transmission and a stiff ride have held it back compared with some rivals.

Despite the mixed reviews, Jeep is selling an awful lot of Cherokees this year. A switch to a new factory has given FCA the ability to boost production of the Cherokee: Sales are up 45% this year through November.

The iconic Jeep Wrangler was all-new for 2018, but it's still a Jeep Wrangler. The one entry on our list to retain old-school body-on-frame construction, the new Wrangler offers incremental improvements to fuel economy and interior amenities without any compromise to its astounding off-road capabilities -- or, it must be said, to the somewhat rough edges that are part of the Wrangler experience.

The Wrangler is what it is. Jeep fans love it, and plenty of them have shown up to buy the new model: U.S. sales are up 24.6% this year through November. 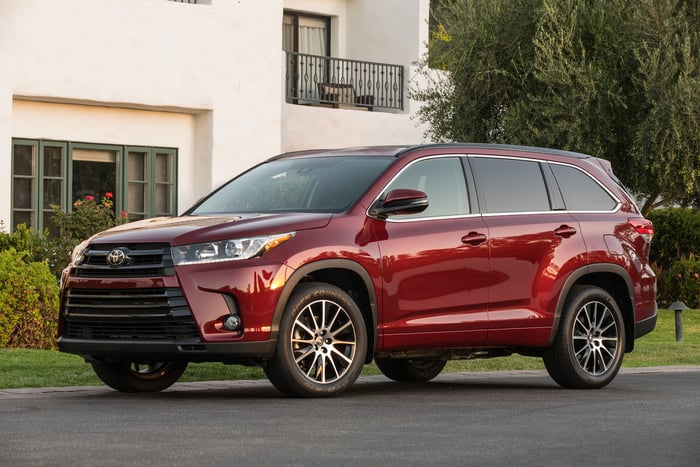 Like Toyota's (TM 0.48%) Camry and Corolla sedans, the Highlander follows the company's classic formula, offering comfortable, safe, fuel-efficient, and very reliable transportation -- in this case, for seven people -- at a good price. For those willing to spend a little more, Toyota offers versions of the Highlander with leather trim and some other upscale features. But note that all Highlanders include advanced safety features like collision warning and automatic emergency braking as standard equipment.

It's a winning formula: Sales are up 13.7% this year through November. 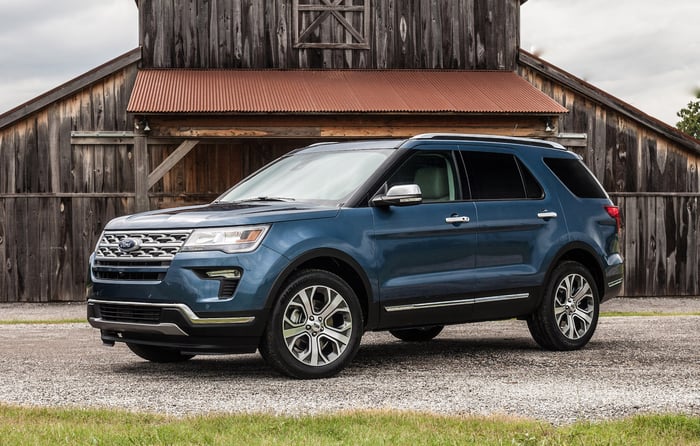 If the Highlander has an archrival, it's Ford's perennially popular seven-passenger Explorer. The Explorer offers a bit more style than the Highlander, and can be ordered with a more powerful engine -- but it shares most of the Highlander's virtues. If there's a knock on the Explorer, it's the vehicle's age: The current-generation Explorer dates to 2011, and although Ford gave it a facelift for 2018, newer rivals like the Highlander are a bit sharper in some ways. (An all-new Explorer is expected next year.)

The Explorer's sales have fallen a bit, down 1.4% through November, but Ford is still selling plenty of them -- and I expect it'll sell plenty of the all-new version as well. 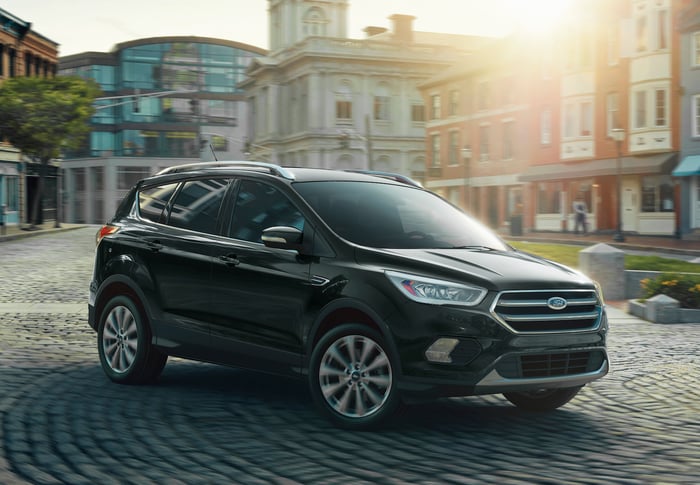 The current version of the compact Ford Escape was a big hit when it was first launched -- in fact, Ford had to scramble to keep up with demand. Of course, that was back in 2013: Like the Explorer, the five-passenger Escape is nearing the end of its model life. Ford is still selling plenty of Escapes, but its age has cost it some sales in this fiercely contested category: Through November, U.S. sales are down 10.6%. 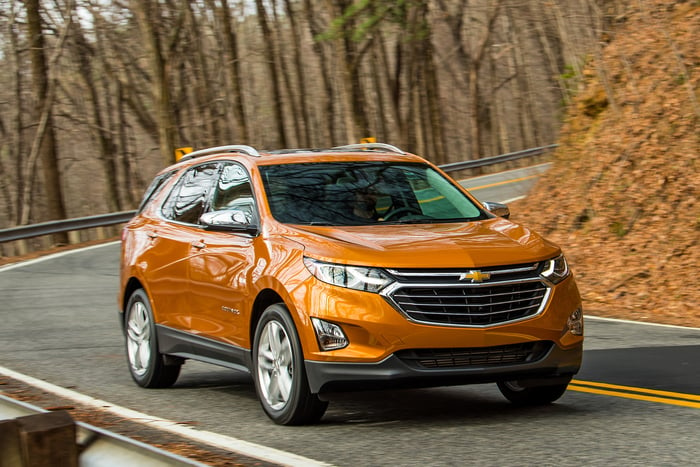 GM has completely overhauled its lineup of crossovers, and nearly all of its new entries are strong. But none have sold as well as the Equinox, a compact five-passenger crossover SUV that offers a comfortable ride and plenty of advanced features at a competitive price. An optional diesel engine makes the Equinox one of the most fuel-efficient SUVs.

Equinox sales boomed shortly after the new model began arriving at dealers in early 2017, and they're still booming: GM no longer reports monthly sales results, but Automotive News estimates that sales of the Equinox are up 14.6% this year through November. 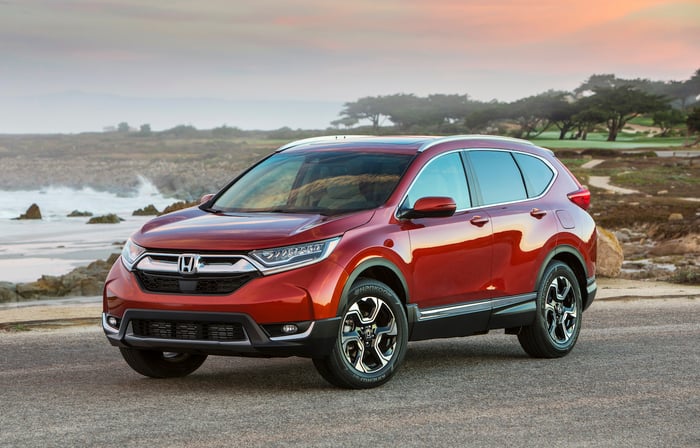 Honda's (HMC 2.27%) huge-selling compact CR-V follows the brand's time-tested formula: It's reliable, fuel-efficient, nicely trimmed, and a little more fun to drive than some rivals. It has been a smash hit, so much so that Honda shuffled products among its factories in 2016 in order to boost production for the U.S. market. That helped the CR-V to a monster sales total last year, and it has stayed close to that pace in 2018: Sales are down 1.2% through November. 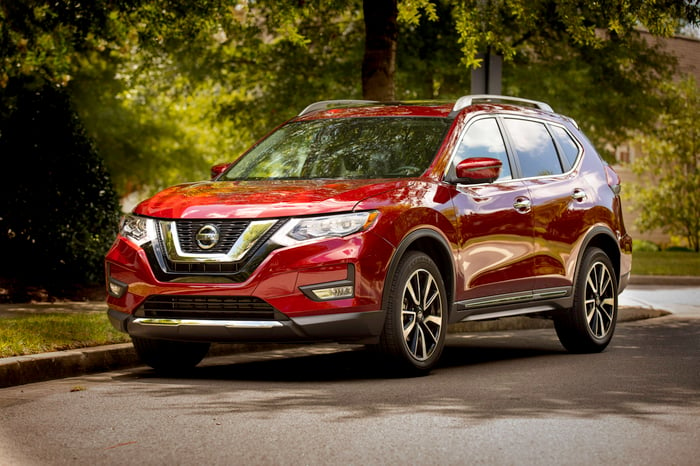 Nissan's (NSANY -1.27%) Rogue has become the company's biggest seller in the U.S., and for good reasons: It shines on test drives, thanks to a nice interior and good on-road manners; it's roomy and comfortable; and it's priced aggressively.

Sales of the Rogue soared last year after a nice redesign; they're up 1.7% this year through November. 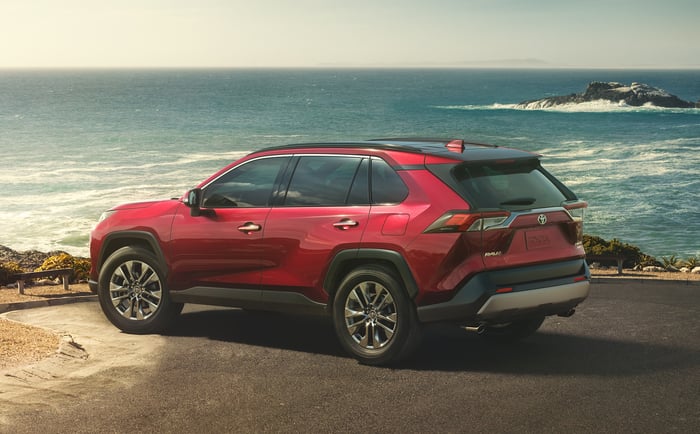 Like the larger Highlander, the one-size-down Toyota RAV4 hits all the right family-friendly notes, offering safe, reliable, comfortable transportation -- in this case, for five people -- at a value price.

In fact, because Toyota is in the midst of rolling out an all-new RAV4 for 2019, outgoing 2018 models have been available at even better prices than usual. No surprise that U.S. sales are up 3.6% this year through November.