Ford Motor Company (F -1.06%) took the wraps off its 2018 Explorer SUV at an event in New York. Ford's mainstay family hauler is receiving a series of upgrades for the 2018 model year, including some new technology -- and a brand-new face. 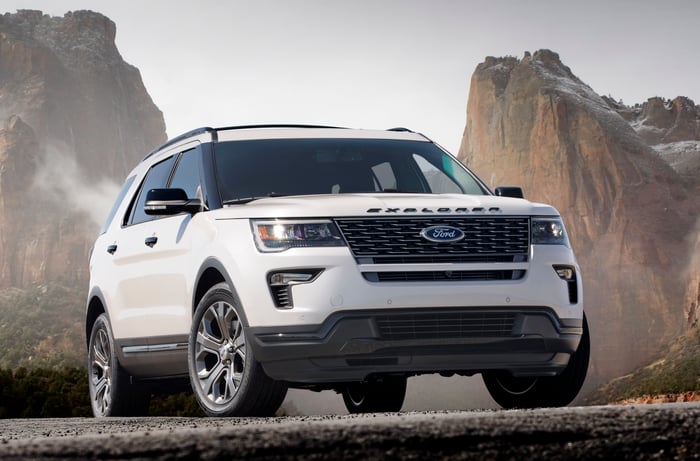 Ford is giving the Explorer a facelift and some tweaks for 2018. Image source: Ford Motor Company.

Ford said the 2018 Explorer is getting new front- and rear-end styling, some new details like revamped fog lamps, and some new family-friendly technology:

For 2018, Ford will also offer Explorer buyers a package that includes its most popular advanced driver-assist systems, including adaptive cruise control and Ford's lane-keeping system, along with automatic high-beam headlights and rain-sensing windshield wipers.

Most everything else, including trim levels and engine choices, will continue unchanged. Pricing for the revamped 2018 Explorer hasn't been announced, but it should be close to the 2017 model's. Ford's Chicago assembly plant will begin shipping the 2018 Explorer to U.S. dealers this fall.

Yes, it did. Ford gave the big SUV a significant overhaul for 2016 that included a new top-of-the-line Platinum trim, a 2.3 liter EcoBoost engine option, an improved suspension, and a bunch of other minor tweaks.

So, why revamp it again just two years later?

The Explorer is an important, high-profile, high-profit model for Ford in a heavily contested market segment. It still sells well, but recent critical reviews have been just so-so when the Explorer is compared to (newer) competition.

That competition has dented Ford's sales a bit. Ford sold 216,294 Explorers in the U.S. last year. That's a lot of Explorers, but that total was down 3.6% from 2015. Sales of the Explorer are down another 2.2% this year through March.

Where are those sales going? Let's put it this way: Sales of Toyota's (TM -0.52%) Highlander, which was new in 2014 and revamped for 2017, are up 20% this year through March. The competition will get considerably fiercer soon: General Motors (GM 0.56%) is in the process of launching all-new and significantly improved versions of its three 7-passenger crossovers, the Chevrolet Traverse, GMC Terrain, and Buick Enclave (to be revealed Tuesday evening in New York). All three will be at dealers before the end of the year.

Ford is working on an all-new Explorer that should be much more competitive with these recent arrivals, but that's another year or two away.

So, why did Ford go to the trouble of updating the Explorer's look and features for 2018? Given the strength of the competition, Ford probably felt some pressure to give buyers some additional reasons to consider the current model while it waits for the all-new one to arrive.

Will it work? We'll find out this fall.