The tobacco giant's $12.8 billion JUUL buy could be "destroying value."

"[P]ursuant to ... a Stock Purchase Agreement ... Altria, through its wholly owned subsidiary, Altria Enterprises LLC ('Altria Sub'), purchased for an aggregate price of $12.8 billion shares of JUUL's non-voting Class C-1 Common Stock." As a result, the company now "beneficially owns 35% of the issued and outstanding capital stock of JUUL" -- and has become a part-owner of the de facto leader in e-cigarettes, with a market share of more than 70%.

And yet, the stock market's reaction to this announcement was not -- one imagines -- what Altria had anticipated. This morning, Citigroup recommended that investors sell Altria stock. 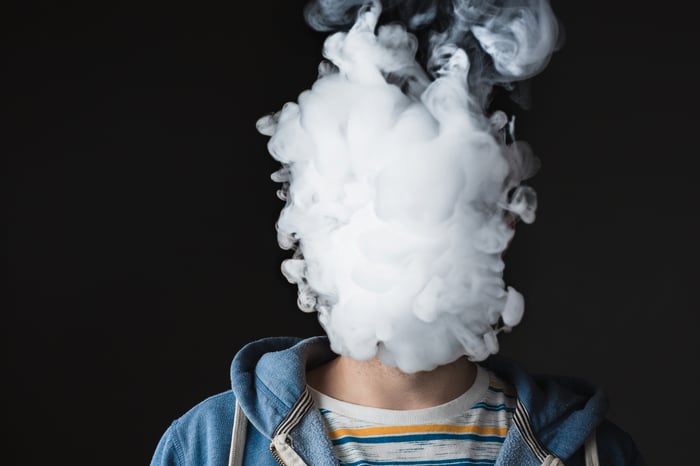 Why did Altria, one of the world's biggest sellers of cigarettes, decide to buy a part interest in JUUL, a maker of e-cigarettes? And why did Altria decide to spend so much money to do so?

My fellow Fool.com contributor Rich Duprey addressed this question earlier in the month, when rumors of Altria's interest began to surface. In contrast to the many makers of e-cigarette devices (aka vaporizers), and the even greater number of alchemists mixing up and selling various formulations of e-liquid, JUUL has mastered a razor-and-blade business model in which it sells a proprietary e-cig device shaped like a thumb drive, a proprietary formulation of e-juice, and also proprietary pre-filled "pods" full of this e-juice to be vaped.

As anyone who has studied the history of Gillette can attest (the phrase "razor-and-blade" actually derives from Gillette's business), this can be an extremely profitable business model. Once a customer has bought the razor/e-cigarette device, they're basically locked into purchasing blades/pods from that device's maker forever after -- at whatever profit margin the maker demands.

And with JUUL commanding a 70% market share, Altria must believe that JUUL will be earning strong profit margins on even stronger sales for some time to come.

Why Citigroup doesn't like the fact that Altria invested in JUUL

Problem is, the e-cigarette market is a notoriously fickle beast, and there's no guarantee JUUL will be able to hang onto its market share forever.

The entire e-cig industry, after all, is a mere 15 years old, having been birthed in 2003, when Chinese pharmacist Hon Lik invented the first e-cig device capable of vaporizing a nicotine-laced liquid to simulate cigarette smoking. Over those 15 years, we've seen numerous changes already, with cigarette-sized small vaporizers such as the Blu brand forming the initial market, but quickly being jettisoned in favor of larger, more powerful e-cigarette devices using refillable tanks, which have in turn been losing ground to device-and-pod combinations such as JUUL.

Just because JUUL is popular today, however, doesn't mean it won't be replaced by a newer thing -- especially now that JUUL itself is in the crosshairs of the FDA, which isn't pleased with how popular the device has become among teenagers.

In Citigroup's view, according to StreetInsider.com (subscription required), Altria is making a mistake investing in a speculative product at a valuation of "40x 2018 sales." While Altria defends the purchase price, saying "it's a tech-style multiple," Citi counters that "investors own MO for predictability and cash. If they want tech-style growth and risk, surely they'd want to pick their own stock?"

Altria has deprived its shareholders of that choice, however, and gambled nearly 14% of its own market capitalization to make what's essentially a tech investment. It's also, incidentally, loading itself down with more debt to, because as it turns out, Altria doesn't have $12.8 billion lying around to invest in JUUL. It's got less than $2.4 billion cash in the bank, according to data from S&P Global Market Intelligence, and thus will have to take out a loan to pay for this acquisition.

Down 30% in share price over the past year, Altria stock might have begun looking like a bargain before this JUUL acquisition. Valued on its $10.7 billion in trailing net income, Altria's $94.8 billion market capitalization gave shares a valuation of just 8.8 times earnings.

There were at least three problems with that calculation, though. First, it didn't take into account Altria's $11.5 billion in net debt (meaning Altria cost more than it appeared to). Second, it overlooked the fact that the company hasn't generated anywhere near $10 billion in real free cash flow in more than a decade (meaning it wasn't as profitable as it appeared). Third and finally, even if Altria really was selling for 8.8 times profits, analysts only thought the company would grow those profits at about 8% annually over the next five years (giving the stock a PEG ratio of greater than 1).

Buying JUUL may juice Altria's growth rate in the short term, solving one of these problems. It almost certainly exacerbates the company's debt problem, however. And because, to date, Altria has still not revealed much information at all about JUUL's profitability or free cash flow, it remains to be seen whether this acquisition will fix the problem of Altria's waning cash production.

Given all this, on balance, I have to agree with Citigroup: Altria is taking a risky gamble, and there are simply too many unknowns for an investor to decide if the company's bet will pay off. In this situation, Citigroup is probably right to sell Altria stock.