Oceaneering International (NYSE:OII) investors have had a rough year.

Tied to a declining oil market, Oceaneering shares have sunk more than 40% since the year began -- and it looks like there may be no reprieve before year-end. Yesterday, analysts at Capital One slashed their price target on the stock. 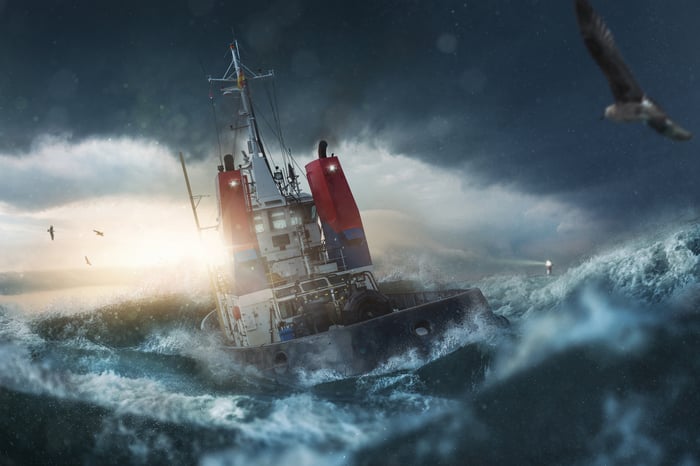 Oceaneering International won a big contract yesterday -- but it's not in a safe harbor yet. Image source: Getty Images.

On Wednesday, the banker cut its price target on Oceaneering shares by 38%, from $21 to just $13.

No reason was given for the price target reduction -- at least, none that StreetInsider.com (subscription required) could discern. But it's not too hard to figure out why Capital One might be losing faith in Oceaneering stock.

Just take a look at the numbers (provided courtesy of S&P Global Market Intelligence). Over the three years ending in 2017, Oceaneering International's annual revenue has been nearly cut in half (down 47.5%), and is currently trending into its fourth straight year of decline for 2018. Profits have been decimated. From $428 million in net income earned in 2014, Oceaneering now has just $25 million in profit to its name earned over the last 12 months, a plunge of 94%.

And free cash flow? Of that there is none. Cash profits sank steadily all through 2017, although they remained positive as of last year. Over the past 12 months, however, Oceaneering International has suffered cash burn to the tune of nearly $90 million.

Granted, none of this is surprising, given the funk that oil prices are in. According to S&P Global data, four of the company's five main business divisions, and more than 80% of its revenue stream, serve "energy markets" through the provision of such goods and services as remotely operated vehicles, subsea products and projects, and asset integrity.

What could go right in 2019 and beyond

And yet, at the same time as Capital One was cutting its price target on Oceaneering International stock, the cavalry rode to the rescue in the form of the United States Navy. (Feel free to picture a cavalry of Navy SEALS mounted on seahorses.)

Just a few hours after Capital One published its negative assessment of Oceaneering International's chances, the Pentagon's own daily digest of contract rewards revealed that Oceaneering International has been awarded a contract worth $827.7 million to provide "management and technical services for the support installation, troubleshooting, repair, and maintenance of" Navy Seawolf-, Los Angeles-, Virginia-, and Ohio-class nuclear submarines.

Oceaneering's contact win is a big one. It amounts to nearly half a year's worth of revenue for the company at current revenue run rates, and could secure as much as two years' worth of work for the company's advanced technologies segment in particular. However, the Pentagon's contract announcement makes it clear that work on this contract will extend over five years, concluding in December 2023.

Thus, the actual net benefit to Oceaneering of this contract win is closer to $165.5 million per year over this period -- still a good four months' revenue for the advanced technologies segment in each year the work will be performed, but not as big a boost as the headline figure might suggest.

Companywide, $165.5 million is enough extra money to return Oceaneering's revenue stream to mid-2017 levels -- and thus potentially, to return the company to positive free cash flow. But to turn Oceaneering International stock back into an attractive investment, I fear it's not quite enough; the company is going to have to win even more supplemental work if it's to return to an even keel.

Long story short: Capital One's price target cut would have made more sense without this sudden, out-of-the blue contract award appearing just hours after it happened. But the analyst's decision to lower the price target is still the right one: This stock remains far from healthy.