Netflix (NASDAQ:NFLX) provided a rare glimpse at the popularity of one of its originals last week when it announced over 45 million accounts streamed Bird Box, a new original film starring Sandra Bullock. The company says that's a record for the first seven days after the release of an original film. Fully one in three Netflix subscribers watched at least 70% of the film.

To date, most of Netflix's success with original content has been in TV series. And its originals have created a challenging environment for traditional television companies -- both distributors and content creators. Distributors are seeing an increase in cord-cutting because consumers can get all the content they want from Netflix and other streaming platforms. Meanwhile, Netflix's shift to originals is decreasing the value it puts on a lot of licensed content from traditional media companies.

But the success of films like Bird Box brings up the question whether Netflix can do the same to the film industry as it did to the television industry. 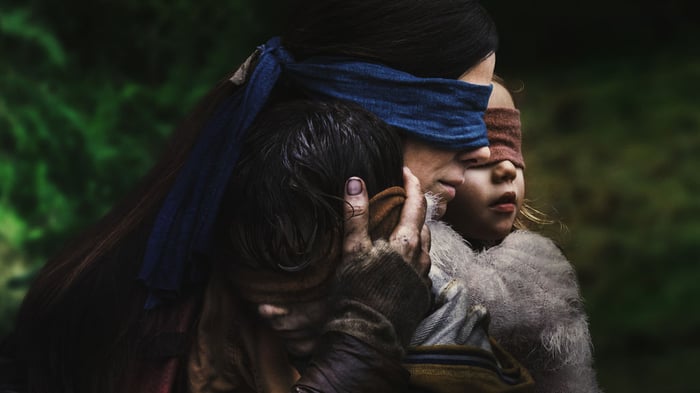 There's only one world where the size of the screen matters: the world the Academy of Motion Picture Arts and Sciences operates in. In order to make films eligible for an Oscar (or other awards) they must meet certain theatrical screening requirements. Indeed, that might be the only thing that ensures Netflix continues to play nice with theater owners.

Most consumers don't care whether they see a film in theaters or at home. They just want an entertaining experience.

What's more, they want value for their dollar. We saw theater ticket subscription services become a huge hit in 2018 because they provided excellent value. (Sometimes that value was too good to last.) There's a clear demand for more film content if consumers can have access to it at a reasonable price.

Netflix prizes itself on the value it provides its subscribers. Management ascribes to the strategy of providing more value than the price of its service, and raising prices after it's earned the right to do so. If consumers want to watch films, Netflix can create films and provide compelling value for its subscribers.

Netflix can do it better than theaters and film studios

Netflix has some big advantages over theaters and film studios.

First and foremost, the company's 135 million global subscribers give it unparalleled reach. If a creator or actor wants their film seen by millions, Netflix is the best thing going. While talent may have complained about Netflix not doing enough traditional promotion (billboards, theatrical trailers, television commercials, etc.), the results speak for themselves. Forty-five million-plus Netflix viewers don't translate into box office sales, but it's still compelling to creators that just want their work to be seen and appreciated.

Netflix is able to make the most of its reach thanks to its valuable real estate -- the top of its home screen -- as well as its viewer data. The combination means the company is able to put the right piece of content in front of the right person at the right time in order to maximize engagement.

Having one of the best marketing platforms available at no cost allows Netflix to spend more on content and less on marketing than other film studios, former Amazon Studios Head of Strategy Matthew Ball recently pointed out. So Netflix can make more content with less risk, which is an attractive environment for creators.

The model is so compelling that Disney (NYSE:DIS), which consistently produces box-office smashes, is keeping some of its films exclusive to its forthcoming Disney+ streaming service. The live-action Lady and the Tramp will be a Disney+ exclusive.

Disney sees the risk Netflix presents, and it's smartly getting on board with the latest form of distribution. Companies that can't or choose not to adapt will see considerable challenges reaching an audience as Netflix continues to attract more talent, produce more original films, and reach hundreds of millions of households around the world.

Will Netflix Do to Film What It Did to TV? @themotleyfool #stocks $NFLX $DIS Next Article
Current