This year could finally reward the pipeline company’s long-suffering investors.

Kinder Morgan (KMI 1.48%) experienced another down year in 2018 as shares of the pipeline giant tumbled more than 15%. That slide came even though the company's earnings started rising again and it significantly improved its financial profile and growth prospects. Because of those factors, the company enters 2019 in its best position in years. Here are three things investors can expect to see from the pipeline giant in 2019.

After slipping over the past few years, Kinder Morgan finally started growing again in 2018. While the company initially foresaw a 3% increase in distributable cash flow for the year, it was poised to exceed those expectations due to the strong results it produced throughout the year. What made that even more impressive is that Kinder Morgan is on pace to outperform its forecast despite selling its Trans Mountain Pipeline in Canada. 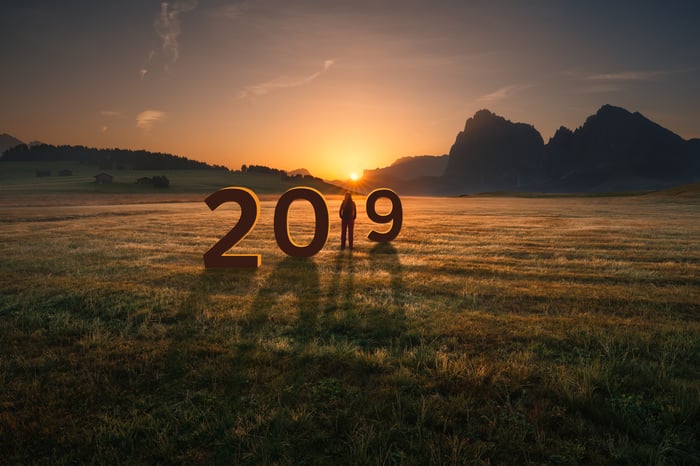 As good as last year was, Kinder Morgan expects 2019 to be even better. The company unveiled its budget in early December, forecasting that cash flow would expand 10% this year despite the lost income from the sale of Trans Mountain. It expects to more than offset that sale by completing two needle-moving expansion projects, the Elba Island LNG Export Terminal and the Gulf Coast Express pipeline, which will move natural gas out of the Permian Basin.

Another thing that will continue growing in 2018 is Kinder Morgan's dividend. In mid-2017, the company promised investors that it would start sending them more cash beginning in 2018, which it did by announcing a massive 60% dividend increase. The company also said that it would boost the payout by another 25% in both 2019 and 2020. While several things have changed since the company unveiled that plan -- including the sale of Trans Mountain -- investors should still expect a 25% dividend increase this year. With shares beginning 2019 selling for around $15 apiece, investors can lock in a roughly 6.6% yield for the coming year.

The company can easily afford that increase since the higher dividend level would only consume about 45% of its expected cash flow in 2019. That would leave it with most of the money needed to finance its current slate of expansion projects. While Kinder Morgan does expect to outspend cash flow by a few hundred million dollars during 2019, it has the balance sheet flexibility to easily cover that gap since its leverage ratio is the lowest it has been in years.

Expect it to significantly bolster its growth prospects

Kinder Morgan's growth project backlog took a big hit when it sold the Trans Mountain Pipeline, since the associated expansion represented a $5.7 billion investment, or nearly half of the company's planned growth spending. However, it has slowly started rebuilding its backlog over the past few months by giving the green light to another large-scale natural gas pipeline out of the Permian Basin as well as to some smaller projects. As a result, the company ended the year with $6.5 billion of expansions in its backlog. While that's down from $12 billion at the end of 2017, it has risen by more than $250 million from the bottom that followed selling Trans Mountain, even though the company also completed more than $550 million in expansion projects last year.

Investors should expect that number to continue climbing in 2019. For starters, Kinder Morgan is working with Enbridge (ENB 2.40%) and Oiltanking to develop an offshore oil loading terminal in Texas. The $800 million project would link Enbridge's oil pipelines to a terminal that would export oil to global markets. Enbridge estimates the partners could have the facility up and running by late 2021 to early 2022 if they win the necessary approvals. In addition to that project, Kinder Morgan is also working to develop a third large-scale natural gas pipeline out of the Permian Basin, another LNG export facility, and several other smaller projects.

Overall, Kinder Morgan currently believes it can secure $2 billion to $3 billion of expansion projects per year. However, the company could exceed that target range in 2019 given the need for new midstream infrastructure across North America to support the continent's fast-growing supplies. Several of its peers are looking for financial partners to help fund their projects, which could provide Kinder Morgan with the opportunity to participate in a large number of expansions in the coming year. That would set the company up to continue growing cash flow at a healthy pace in the future.

2019 could be the year investors have been waiting for

Investors can bank on several things from Kinder Morgan this year. Not only should its cash flow rise 10%, but its dividend should increase another 25%, while its expansion project backlog should also improve. That trio of fuels could help boost the stock price this year, especially given how cheap shares are, as they trade at less than seven times cash flow, which is about half the price of most peers. This pipeline stock has significant upside potential in 2019 if investors finally give the company the credit it deserves for improving its financial situation and growth prospects.