Check out the latest Apple and Intel earnings call transcripts.

Chip-giant Intel (NASDAQ:INTC) became an Apple (NASDAQ:AAPL) iPhone supplier in 2016 with the launch of the iPhone 7-series smartphones, providing cellular-modem solutions for the devices. Intel's iPhone modem share expanded dramatically with the launch of Apple's latest iPhone models as it won the entirety of the modem orders for those devices. (Intel had previously shared the socket with wireless giant Qualcomm (NASDAQ:QCOM).)

While Intel's cellular-modem revenues still are set to grow significantly year over year, even though Apple dramatically cut its financial outlook for the quarter on the back of weak iPhone sales, the chip giant obviously isn't going to sell as many modem chips to Apple as it would have if iPhone sales were going roughly as planned. That's going to blunt the kind of growth that Intel's modem business could deliver over the course of Apple's current iPhone cycle. 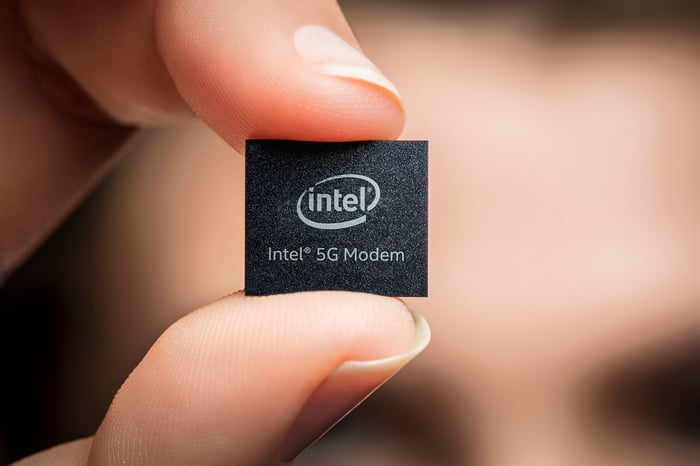 There is, however, a silver lining to this situation for Intel.

Last quarter, Intel admitted that it wouldn't have the supply in place to meet all of the demand that it expects to see in the fourth quarter of 2018. Here's what Intel CFO Bob Swan said on the company's Oct. 25 earnings call:

Our focus has been prioritizing, in conjunction with our customers, Xeon and Core processors. And therefore by definition, the lower end of PC and the IoT [Internet of Things] business is being constrained. So we are in a constraint scenario into the fourth quarter, both at low-end PC and IoT.

Swan didn't say when he expected that shortage situation to be behind the company, but he did say the following:

As we go into next year and the timing, we've put a lot of capital to work this year. It's a record year for CapEx for us at $15.5 billion. It's $1.5 billion higher than what we expected entering the year, and we have taken some of our 10-nanometer equipment and tools and began to blow that back to meet the increased demand for 14. So we're working extremely hard to get back on track in 2019. But at this stage of the game, given the demand signals we've seen in fourth quarter, we're going to be constrained a little bit.

Also keep in mind that while the modems that Intel supplies into the iPhone 7-series and iPhone 8-series devices are manufactured by a third party, the modems that power Apple's latest iPhones are built in-house by Intel using the same basic 14nm technology that's used to build everything from its data center CPUs to its low-end PC processors.

This means that, to the extent that Apple cuts its iPhone modem orders from Intel, the chip giant should see some of its 14nm capacity freed up. This could allow the company to reach supply to-demand balance in the low end of the PC market, as well as in the Internet of Things market a little more quickly than it might have if Apple had been gobbling up Intel's modems like crazy.

Intel's next modem -- which is likely to power the entirety of Apple's 2019 iPhone lineup -- also is set to be manufactured on that same 14nm technology. Unless Apple sees a sharp rebound in iPhone shipments starting with its next-generation iPhone lineup, this development should mean that Apple likely will buy fewer modems from Intel in support of its next iPhone product cycle than it had originally expected to.

Although Apple cutting component orders for its latest iPhones should free up some of Intel's 14nm capacity, it's important to keep in mind that, at this stage of the iPhone ramp, Apple's buying far fewer modems than it did earlier in the cycle. Indeed, on its November earnings call, Qualcomm explained that "over 50% of the expected fiscal 2019 headwind related to Apple is reflected in our first fiscal quarter guidance and impacts our [Qualcomm CDMA Technologies] business."

This tells us that Apple tends to buy a lot of modems at once, relatively early on in an iPhone product ramp -- something that's unsurprising given the typical shape of an iPhone ramp. (Apple sells a lot of phones during its peak quarter and then sees sales fall off fairly dramatically after that.)

Intel likely is past peak iPhone modem shipments at this point, so the amount of capacity that's likely to be freed up as a result of this order cut probably isn't going to be gigantic. However, if I were one of Intel's low-end PC or Internet of Things customers, I'd probably appreciate having as many of my orders filled as quickly as possible.