After shares of Delta Air Lines (DAL -1.19%), Southwest Airlines (LUV 0.13%), and American Airlines (AAL) all lost altitude and plunged into multipercentage-point loss territory yesterday, you might have thought things were looking pretty grim for airline stocks -- and they were, but only for about 24 hours. 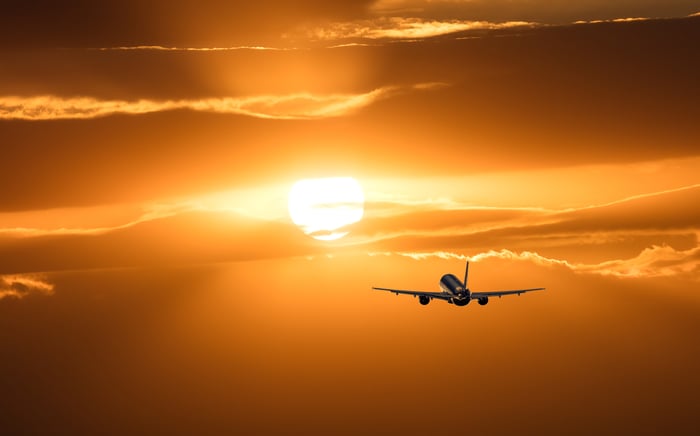 What's behind these sharp swings in share price? Yesterday, as you may recall, Delta made an 8-K filing with the Securities and Exchange Commission (SEC) describing how its Q4 total revenue per available seat mile (TRASM) is likely to come in below previous estimates but "adjusted" earnings will arrive on target -- and toward the high end of previous guidance at $1.25 and $1.30 per share. Profit margins also look strong for Q4, rising into the 10% to 11% range.

Yesterday, investors focused on the negative aspects of this report, and in particular, Delta's observation that the ticket prices it was able to charge "in late December [were] more modest than anticipated" -- and extrapolated these trends into a theory that all airline stocks were in trouble.

Today, investors appear to be rethinking and refocusing on more positive aspects of Delta's commentary, such as the fact that "the overall demand environment remains healthy with strength in both business and leisure segments throughout the quarter," while "fuel price per gallon is expected to be ... approximately 10 cents below initial guidance."

Assuming strong demand for air travel services and reduced cost of fuel, this seems to imply there's a good chance airline profits will exceed expectations when Q4 earnings start coming out -- and perhaps even into 2019, as well.

Combined with some arguably good bargains in airline stocks today (Southwest shares cost only 7.6 times earnings, Delta 9.5 times, and even American Airlines a rather reasonable 13 times earnings), investors appear to be thinking that the aftermath of an airline-stock sell-off is a great time to begin buying.