Shares of engineering and construction company Fluor ( FLR 1.29% ) tumbled 21.3% in December, according to data provided by S&P Global Market Intelligence.

The decline completed a dismal year for the company, which was accompanied by a near-40% drop in its stock price. It's all the more disappointing because there were high hopes for Fluor going into 2018. The company has significant exposure to mining, energy, and heavy industries and the expectation was that capital spending in these industries would go up -- boosted by an ongoing recovery in energy and mining commodity prices. 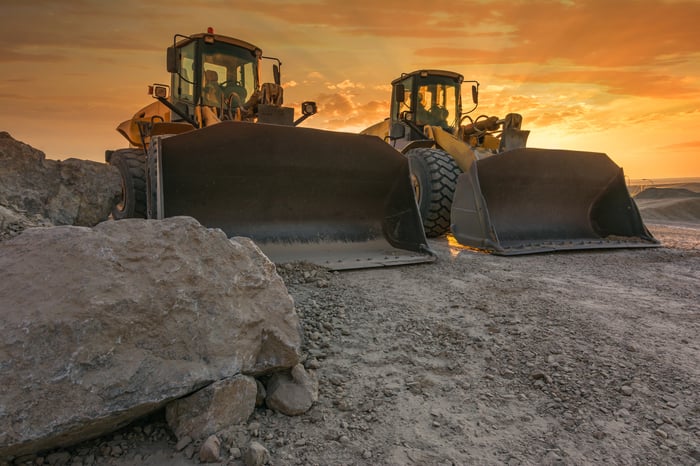 Unfortunately, two things conspired against Fluor in 2018. The first consisted of a few execution issues that forced the company to slash the full-year 2018 earnings-per-share guidance range from $3.10-$3.50 to $1.80-$1.90 by the third quarter. Specifically, Fluor had challenges on a gas-fired project in the first quarter and then took charges on a downstream project in the third quarter.

Second, the expected upturn in capital spending in its end markets appears to be under some threat from a sustained fall in energy and mining commodity prices in the second half of the year.

Negative sentiment around the latter also contributed to the decrease in Fluor's share price in December.

The execution challenges cast doubt on Fluor's ability to take full advantage of any improvement in its end markets, and it's understandable if investors find other stocks to play the theme.

Moreover, companies with mining and energy exposure, such as Cummins have talked of a pause in spending by its customers. Process automation company Emerson Electric CEO David Farr, meanwhile, has expressed some concern about growth prospects in 2019 in Europe and China.

Given the current environment, it's likely that Fluor is seeing, at the very least, a pushout in the recovery of spending in its end markets. The question is whether it's a temporary delay or the start of a more protracted period of weakness.

To be fair, Fluor has been growing its backlog in 2018, but future growth is dependent on contract awards, and the anecdotal evidence is that energy/mining companies may well be delaying signing off on major projects.

All told, it's important to monitor energy and mining and metals prices with regard to future prospects for Fluor. China's importance as the swing factor in end demand for commodities means it's always going to be the first thing commodity investors consider when thinking about demand, so Fluor investors need to keep an eye out for developments in trade negotiations with President Trump and/or China's growth trajectory.

Fluor needs both to go well before its customers are likely to commit to multimillion-dollar projects again, particularly with regard to expansionary capital spending projects.

Why Fluor Stock Tanked 11% at the Open Today