See why Chick-Fil-A is taking the restaurant industry by storm and what Taco Bell's secret ingredient was last year.

There were plenty of trends that shaped the fast-food industry in 2018. Chains continued to invest in and expand delivery capabilities as customers have grown more accustomed to the convenience of e-commerce. They also faced a lag in in-store traffic, which continued from previous years, and companies such as Chipotle Mexican Grill, Starbucks, Shake Shack, and Yum! Brands (YUM 0.48%) stepped up efforts in digital and delivery initiatives as more restaurant brands embrace the smartphone app and the incumbent benefits.

On the cost side, business was tough as well, as rising minimum wages and a tightening labor market meant labor costs generally rose as a percentage of revenue at major restaurant chains. And in the fast-food menu competition, the race to the bottom in value offerings continued, as McDonald's (MCD 0.63%), Burger King, and Wendy's competed over dollar-menu deals. Acquisitions also remained popular in 2018, as Bojangles, Pret-A-Manger, and Sonic were all taken private.

However, the more things change, the more they stay the same, especially when it comes to the fast-food items customers like. Burgers, chicken, fries, burritos, and pizza remain as popular as they've been for many years.

In no particular order, let's look at five of the most popular fast food items of 2018. 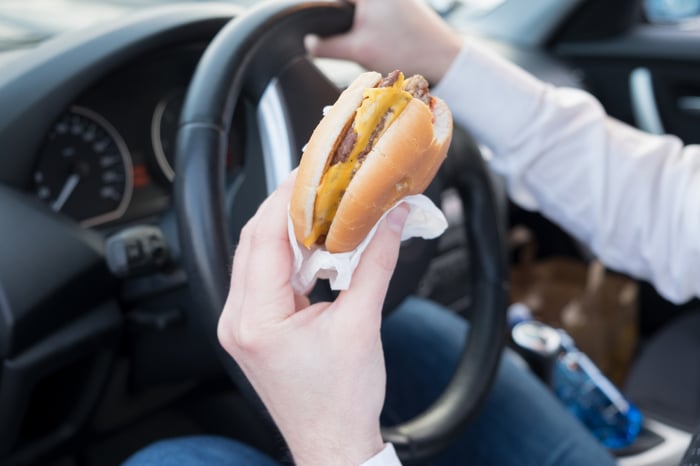 Given the popularity of McDonald's fries, you may not be surprised to learn that the Golden Arches is the world's biggest purchaser of potatoes, as well as beef, pork, lettuce and tomatoes, and  that it's the biggest buyer of chicken after KFC.

McDonald's fries remain a popular item as a side dish or standalone order. The company doesn't disclose individual orders, but fries are included in all of the company's value meals, showing their popularity.

Fries are the best-selling item at McDonald's and are a big seller at other fast-food chains, including Chick-Fil-A, Burger King, and Wendy's, but for the sake of originality, we'll avoid including them on the list.

Turkey is the most popular sandwich meat in the U.S., so it shouldn't come as a surprise that the turkey sub, as a 6-inch or foot-long, is the most popular item at Subway. However, Subway has been seeing sales decline over the past several years and has been forced to shutter stores after it overexpanded, in part because of its low-cost franchise model that fits in smaller spaces than the average fast-food chain.

Subway has largely stood still as the fast-food industry has shifted with the rise of fast-casual and legacy chains investing in store renovations and other improvements. Competition from Panera and others have also challenged Subway's sandwich supremacy, and as a result, Subway planned to close about 500 of its approximately 26,000 U.S. locations last year.  Traffic has fallen 25% since 2012, as tensions between franchisees and corporate have grown more intense.

The company's unique and tasty menu, as well as the ascendance of chicken over beef, has made Chick-Fil-A the leader in average unit volume. Though the company is best known for its original chicken sandwich, which features a breaded boneless chicken breast and dill pickle chips, it says its most popular entree is the chicken nuggets. Ahead of them are the waffle fries, and then soft drinks.

Chick-Fil-A started serving chicken nuggets in the 1980s, when customers started asking for the chicken sandwich to be cut into bite-sized pieces. The privately held Chick-Fil-A, which is still run by the founding family, is now the fastest-growing major fast-food chain in the country, with sales up 15.5% last year through July.

As of 2017, Burger King had the third highest systemwide sales at $10 billion, behind McDonald's and Subway, though Chick-Fil-A probably passed it in 2018.

Nonetheless, the company's trademark burger and its most distinguished menu item, the Whopper, remains popular with fast-food fans.  Now a part of Restaurant Brands International (QSR -0.26%) along with Tim Horton's and Popeye's, Burger King offered the Whopper for just a penny in December to celebrate its anniversary. However, there was a catch. The deal was available only to customers who downloaded the Burger King app within 600 feet of a McDonald's, as Burger King took a swipe at its traditional rival.

Notably, McDonald's, which has its own trademark sandwich in the Big Mac, has long sought to create its own version of the Whopper with burgers such as the Big 'N Tasty, but it's had only limited success in matching the Whopper's popularity.

Anchored by the Whopper, Burger King has added nearly 1,000 locations over the past year, the majority of them in international markets. However, there are signs of weakness at home: Burger King's domestic comparable sales fell by 0.7% in the third quarter, its most recent report.

Probably no major chain has had more success with new menu items than Taco Bell, which is owned by Yum! Brands. Its Doritos Locos Taco took the country by storm when it was introduced in 2012 and sold 100 million units in just its first 10 weeks.  However, for Taco Bell, 2018 has been the year of the nacho fries. The $1 item, launched in January, sold more than 53 million times in its first five weeks, and a Taco Bell spokesman said the item, which is simply an order of fries with a side of nacho cheese sauce, was requested with one out of every three orders, compared with one out of every four for the Doritos Locos Taco.

Taco Bell originally intended for the nacho fries to be a limited time offer, but after a hiatus in the spring, the chain brought popular side dish back in the summer, again for a limited time. Now it's promising to bring them back again this year. They appear to have become a seasonal item to drum up sales and traffic, similar to the McRib sandwich at McDonald's.

The new fries helped drive Taco Bell's same-store sales up 5% in the third quarter and systemwide sales growth of 8%, and the company was on track to generate around $10 billion in systemwide sales in 2018. That puts it in a tight race with Subway, Chick-Fil-A, and Burger King.

With Chick-Fil-A still on the rise and Subway losing sales, 2019 could see a changing of the guard in the fast-food industry.