Last year was another tough one for investors in Plains All American Pipeline (NASDAQ:PAA). At one point, units of the oil pipeline master limited partnership had rallied more than 30% as they bounced back from an atrocious 2017, when they plunged 36%. However, a late sell-off in the market wiped away those gains as Plains All American Pipeline ended the year down 3%.

While that made 2018 seem like a lost year, that wasn't the case as the company made excellent progress on its strategic plan. Because of that, investors can expect to see several positive things from the company this year. 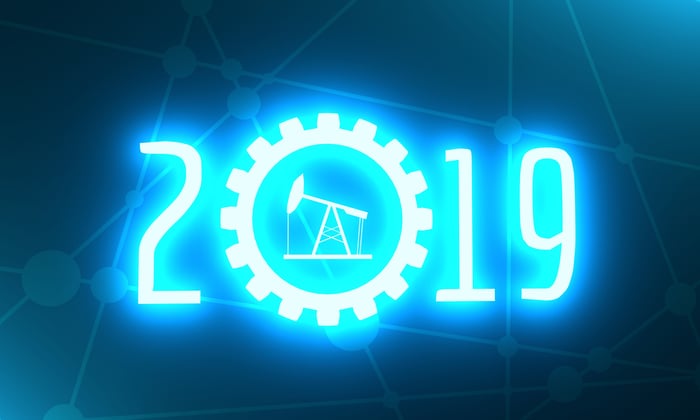 Plains All American Pipeline slashed its dividend twice during the oil market downturn to conserve cash so that it could finance expansion projects while shoring up its balance sheet. Those efforts should begin paying off in 2019 as the company expects to achieve its targeted leverage ratio early in the year, which will free it up to start returning more cash to investors in 2019.

The company is currently weighing the size, timing, and frequency of the distribution increase, which it should announce early in the year. However, it will likely be a substantial boost of 10% or more since the company covers its current 5.3%-yielding payout with cash by nearly two times, and is forecasting earnings to rise more than 10% this year even as capital spending declines.

Plains All American Pipeline currently has $2.6 billion of expansions underway, a $650 million increase from the start of last year after it secured several new projects. Those expansions position it to grow earnings at a double-digit annual rate through at least the end of 2019.

The company spent about $1.95 billion on those expansion projects last year, leaving it with only $650 million of planned capital spending for 2019. However, investors should expect that number to rise, with Plains suggesting it will spend at least $1 billion this year. That's because the company anticipates that it will sanction several of the projects that it currently has in development.

One of the biggest is an oil pipeline joint venture with ExxonMobil (NYSE:XOM) and another partner that the company anticipates moving forward with this year. That major oil pipeline is crucial to Exxon's long-term growth strategy in the Permian Basin, which is why it not only pledged to be a major shipper on the line but also an investor. In addition to that project, Plains All American is also looking at expansions of its Diamond, Red River, and Capline pipelines.

Complete a simplification transaction this year

One major trend in the midstream sector last year was a consolidation among related companies. For example, Canadian oil pipeline giant Enbridge (NYSE:ENB) acquired all four of its publicly traded affiliates. Those transactions simplified Enbridge's corporate structure while creating one stronger entity.

Plains All American took a step in this direction in 2016 when it reached a deal with Plains GP Holdings (NASDAQ:PAGP) to eliminate the expensive management fees Plains paid to its parent company. However, with most of its rivals taking the next step by combining into one single entity, investors can expect Plains All American and Plains GP Holdings to follow their lead by merging this year especially since it's now in a more comfortable position to do so after shoring up its financial situation during 2018.

Set up for stronger returns in 2019

While 2018 was another down year for Plains All American Pipeline, it made excellent progress on its turnaround plan while earnings rose double digits.Consequently, Plains could bounce back significantly in 2019 since it expects to announce a big dividend increase as well as more expansion projects. Add that to the near certainty that it will complete a simplification transaction, and catalysts abound at this high-yielding midstream stock.