The rail giant impressed investors last year with its drastic productivity improvements and pricing strength. Will these trends carry through to the company's final quarter of 2018?

CSX (CSX -0.80%) reports fourth-quarter 2018 earnings on Jan. 16 after the markets close. As I've recently discussed, the rail behemoth is coming off a year of relative outperformance against both the overall market and the industrial sector of the S&P 500 index.

Let's review four themes in CSX's upcoming report that will indicate whether the company has maintained its momentum at the outset of the new year.

According to CSX's final weekly report of 2018, total carload traffic increased by 3% in the third quarter against the prior-year period, to 1.64 million carloads. Strength in petroleum, metal products, and motor vehicles and parts offset a flattish performance in coal volumes and a slight dip in chemical shipments.

The weekly carloads report gives us a sneak preview of earnings, at least from a volume perspective. We won't know how the company was able to price its shipments until earnings are released. However, if current trends hold, the fourth quarter's top line should be in decent shape. Through the first nine months of 2018, CSX managed a 1% year-over-year volume increase and a 6% pricing increase per shipment unit, for a total revenue increase of 7%. The company's pricing power has been supported in recent quarters by a moderately expanding U.S. economy, which has nudged rail freight demand higher.

Management doesn't provide formal quarterly earnings guidance. However, CEO James Foote did note last quarter that the company was raising its full-year revenue growth expectation from the "mid-single-digit range" to a new band of between 6% and 8%.

In October, CSX announced a series of growth initiatives to expand its Northwest Ohio intermodal terminal -- "intermodal" referring to transport between multiple modes, including rail, road freight, ocean, and air. These initiatives include a new haulage agreement with BNSF Railway as part of the railroads' partnership to launch a premium intermodal service between the Northwest Ohio terminal and Los Angeles. They also entail the construction of a logistics park beside the terminal, and new service routes to the Port of New York and New Jersey from the eastern side of the terminal complex.

Intermodal transport represents a long-term growth opportunity for CSX, with handsome margins. But it's also provided recent revenue and margin opportunity as the trucking industry continues to experience tight capacity, and shippers see rail intermodal traffic as a viable freight alternative. Last quarter, management pointed out that contract pricing in intermodal transport was particularly strong among its business units. 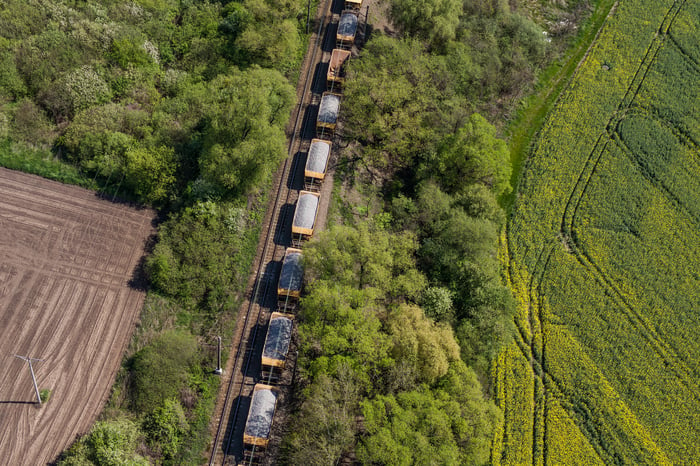 3. A relentless pursuit of productivity gains

The most salient aspect of CSX's performance in 2018, by far, was the organization's extreme improvement in its operating ratio, a measure of a railroad's efficiency -- a figure determined by dividing total expenses by total revenue; a lower number indicates higher efficiency. In the third quarter of 2018, CSX's operating ratio of 58.7% represented a 9.7-percentage-point improvement over the prior year's reading of 68.4%.

Look for management to report progress on the many factors that have recently compressed the operating ratio in such a favorable manner. These stem from the company's implementation of "precision scheduled railroad" principles and include higher train velocities, reduced train dwell time, and the dismantling of "hub and spoke" architecture wherever possible in favor of linear train routes.

Precision scheduled railroad implementations also require more efficient use of assets. The railroad placed 800 locomotives in storage in the first nine months of 2018 to right-size train capacity against demand. It trimmed the number of rail switching yards it operates -- again, to promote linear routes. Finally, management culled the CSX workforce by 2,000 people, inclusive of employees and contractors, in the first three quarters of 2018, out of a total workforce of roughly 24,000 at the beginning of the year.

CSX will almost certainly improve on its fourth-quarter 2017 adjusted operating ratio of nearly 65% when it reports comparable 2018 quarterly results. Another sub-60% showing is quite possible, and shareholders can expect management to also share preliminary 2019 operating-ratio targets during the company's post-earnings release conference call.

As I explained in the spring of 2018, CSX has embarked on a massive $5 billion share-repurchase program that it's aiming to complete by the first quarter of 2019. Through the first three quarters of 2018, the organization bought $3 billion of its own shares under this authorization. During CSX's third-quarter earnings conference call, management indicated that the company is on track to complete the total program on schedule. That implies CSX is likely to have repurchased at least $1 billion of its own shares over the past three months, based on the pace of prior quarters.

In addition to CSX's stellar operational performance in 2018, these forceful share purchases on the open market have helped provide support for CSX shares, which rallied 13% last year even as the broader market declined. The program was fueled in part by tax savings from the U.S. tax legislation implemented at year-end 2017, so such a large authorization probably won't be repeated soon. However, management may guide investors on what to expect on this front for the balance of 2019 when CSX reports next week.

Asit Sharma has no position in any of the stocks mentioned. The Motley Fool owns shares of and recommends BNSF Railway parent Berkshire Hathaway (B shares). The Motley Fool has a disclosure policy.