The short answer: A lot of new models.

General Motors (GM 3.63%) said that it will introduce a slew of new models in China over the next year, hoping to regain momentum after a fourth-quarter slump left its China sales down 9.8% in 2018.

GM said that its sales in China fell 25.4% in the fourth quarter of 2018, as a slowdown in light-vehicle sales in the world's largest new-car market turned into a steep decline. Aside from the Cadillac luxury brand, all of GM's China brands experienced double-digit percentage sales declines in the quarter. (Cadillac sales were up 17.2% in the fourth quarter, 9.7% for the year.) 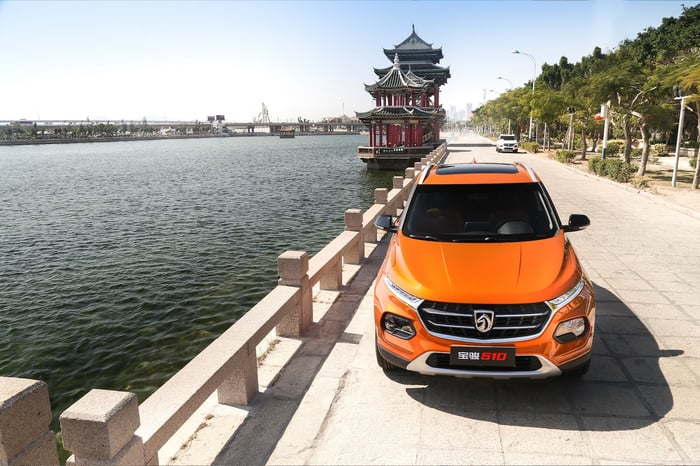 GM launched the Baojun brand to compete with low-cost domestic Chinese automakers. Its compact crossover SUV, the 510, has been a big seller. Image source: General Motors.

GM wasn't alone. China's most successful domestic automaker, Geely Automobile Holdings (GELYF 1.38%), said that sales at its mass-market Geely and upscale Lynk & Co brands fell a combined 39% in December. While most other automakers hadn't yet reported their full-year China sales totals at press time, it's already clear that sales of mass-market vehicles have slumped -- a slump that is expected to make 2019 a difficult year.

At least for the moment, though, luxury-vehicle sales appear to have some growth left. Cadillac's fourth-quarter growth topped a good year in which its China sales rose 9.7%. Volkswagen subsidiary Audi reported an 11% increase for the year, and Volvo Cars said its China sales rose 14%. Heavy hitters Mercedes-Benz and BMW had not yet reported their 2018 China sales at press time.

How GM will try to bounce back

GM -- and its rivals -- may have no choice but to ride out the China auto-sales downturn. But GM, which has been planning a new-product blitz in 2019, said it will keep that effort on course. The company will introduce "more than 20 new and refreshed models" in China this year, which it said will be a record.

The Chevrolet brand's flagship in China is the Malibu XL, a version of the U.S.-market Malibu sedan positioned as an upscale entry. Sales rose 25% in 2018. Image source: General Motors.

The upshot: GM's plan is solid, but the market may make it moot

Many investors don't understand just how fast-paced the Chinese new-car market is: Every automaker you've ever heard of, plus a slew of domestic Chinese producers, all competing for sales growth means that there are brand-new vehicles coming to market all the time. The "latest thing" in China's auto market is often much newer than the "latest thing" elsewhere.

The flip side of that is that automakers that stick with product-replacement cadences appropriate for Europe or the U.S. tend to get left behind in China -- as Ford Motor Company (F 3.06%) has discovered, to its dismay.

GM has successfully navigated the complex Chinese market for years, in part by ensuring that its big sellers are kept fresh and up-to-date. Its planned new-product blitz should help ensure that it remains strongly competitive in China, no matter how the market performs -- but if the mass market continues to slump, it may be tough to see that advantage on GM's bottom line for a while.