For the second time in a week, Wall Street is upgrading Micron Technology (MU 4.37%).

2018 was a rough year for Micron, ending with the stock down nearly 47% from its highs of June on worries of an oversupply of memory products on the market. Still, the first full trading week of the new year dawned bright for Micron, beginning with an upgrade from BMO Capital for the maker of DRAM and NAND flash memory.

Two days later, Micron's getting even more good news, as Bernstein jumps on the bandwagon with another buy rating. Here's what you need to know. 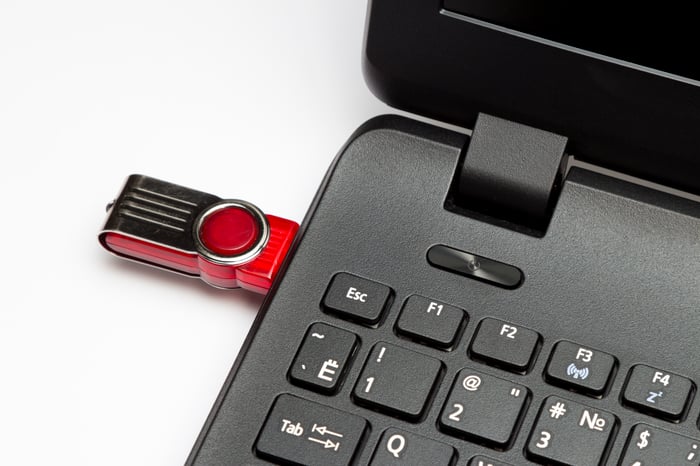 Let's begin with BMO's recommendation, which came out on Monday. In a note covered on StreetInsider.com (subscription required), BMO predicted that Micron stock will outperform the market this year, rising perhaps as high as $50 a share. (That would be a better-than-40% profit off of today's prices.)

Tempting fate, BMO proclaimed "the shares have bottomed out," and argued that Micron today is "a structurally more profitable company" that it once was, yet trading at a cheaper valuation. While the analyst still sees risks in the market for PC and mobile device memory, BMO is pretty sure Micron can be relied upon to produce "FCF generation even under rather dire scenarios that we are modeling for."

Echoing these sentiments, Bernstein today upgraded Micron as well -- also to outperform, and with a price target of $52.

Like BMO, Bernstein has misgivings about both the stock and the market it operates in, and warns that despite its upgrade, there's still "20% potential further downside in a worst case scenario," according to TheFly.com. Regardless, Micron stock right now is trading for a P/E ratio of only 2.6. (Yes, you read that right.) And even if profits take a hit as expected this year, the company's forward price-to-earnings ratio is just 5.1. The analyst believes that "the risk/reward is now too attractive to ignore."

And I have to admit: A P/E ratio of less than 3 -- or even a bit more than 5 -- is pretty darn cheap. It's cheap even if analysts are right about Micron's earnings having peaked in 2018. (Analysts quoted by S&P Global Market Intelligence are predicting about a percent or two's worth of annual profits decline over the next five years.)

But what are the risks driving those assumptions?

Basically, it's a fall-off in demand for DRAM that has most market analysts worried. As we mentioned last week, market researcher TrendForce recently cited a "sharp" sequential downturn in DRAM prices, saying "contract prices of DRAM products" fell 10% quarter over quarter in Q4, and "the demand outlook for PCs, servers, smartphones, and other end consumer products remains weak" into the new year.

Confirming that view, just yesterday -- in between Micron's two upgrades -- Micron's memory-making rival Samsung lowered its preliminary outlook for Q4. As reported by TheFly.com, Samsung "cited excess inventory at its hyperscaler customers and weaker than expected demand in smartphones." Both Samsung and Micron are hopeful the supply glut will get worked through by midyear, but at least one analyst is predicting that oversupply in the memory market "will persist for at least another 3-6 months."

(Those two predictions, by the way, aren't exactly contradictory -- but they do still imply a bit of rough sailing for Micron over the next couple quarters, and perhaps longer.)

Should investors rush to exit Micron stock now, before those predictions come to pass -- and to prevent getting hurt even more, if the supply glut lasts even longer? That would appear to be a prudent move, but consider:

Micron right now looks to be in fine financial fettle to withstand a downturn of modest duration. In addition to the uber-low P/E ratio, the stock sports a net cash position on its balance sheet, and is generating reasonably strong free cash flow of nearly $9 billion annually. Even if weakened demand for flash memory products cuts into those numbers, I have to say that I agree with BMO here -- I don't see Micron's free cash flow turning negative when it's starting from such a high level.

And by the way, when I say Micron's free cash flow is only "reasonably" strong, that's only because $9 billion is about 40% less than the company's $14.75 billion in reported GAAP income. Even valued on its weaker free cash flow number, though, rather than its stronger GAAP earnings number, Micron stock would still sell for only about four times cash profits.

That still seems like a bargain basement price to me. I think Wall Street is right to recommend Micron.