But only one of them just got an upgrade from the bankers at Morgan Stanley. 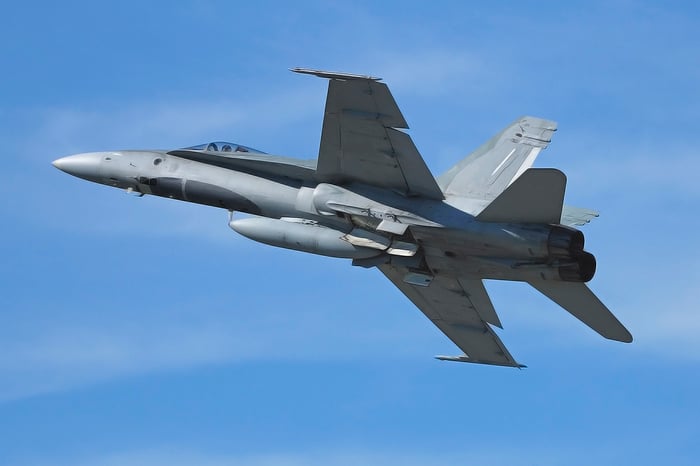 Could a Boeing F-18 beat a Lockheed F-35 in a dogfight? Maybe not. But in a contest between the two stocks, Boeing comes out the winner. Image source: Getty Images.

Yesterday evening, Morgan Stanley upped Boeing stock to an overweight rating and predicted that Boeing could soar $100 within a year, to as high as $450 per share.

Morgan Stanley believes "barring a downturn" in the economy, Boeing's commercial airplanes division should show "resilient" earnings per share and free cash flow, according to StreetInsider.com (subscription required). As the analyst explains, declining oil prices and "steady" air traffic will give rise to strong airline profits, which should work in Boeing's favor.

Yet despite this rosy forecast, Morgan Stanley notes that Boeing shares are "down ~15% from highs" and trading for only about 10 times the amount of free cash the analyst sees Boeing producing in 2020 (a 10% "free cash flow yield"). This, the analyst argues, is an attractive entry price on the stock given its likely future of "compounding growth coming from buybacks, production hikes, and [a profit] margin improvement" of between 15% and 20%.

Now, you may have noticed by this point that Morgan Stanley is leaning pretty heavily on Boeing's potential as a provider of airplanes to the commercial market, and saying precious little about the company's prospects as a major defense contractor, or as a leading supplier to the U.S. space program. That may be no accident, because at the same time this analyst is upgrading Boeing, it's downgrading Lockheed Martin, whose space and military aerospace products dominate its business, while its commercial operations are barely an afterthought.

Once again, Morgan Stanley peers out to the situation it sees unfurling in 2020 in explaining its Lockheed Martin downgrade. In that year, the analyst warns, F-35 production at LockMart should begin "plateauing" -- i.e., not declining exactly, but more likely hitting peak production levels that will not increase in future years. This, combined with "pension tailwinds receding," should begin impacting Lockheed's cash production levels and its earnings in that year.

Therefore, citing a concern about the company's ability to continue growing free cash flow in 2020 and beyond, Morgan Stanley has decided to downgrade Lockheed Martin stock to equalweight and cut its price target by 18%, to $300.

Now mind you, Lockheed Martin shares currently cost only $273 apiece, so even a rise to just $300 would represent about a 10% profit for shareholders. Combined with Lockheed's generous 3.3% dividend yield, that works out to a very respectable return of better than 13% that Morgan Stanley is predicting -- hardly a reason to dump the stock.

That being said, I do agree with Morgan Stanley's major thesis that, right now, Boeing looks like a much better buy than Lockheed.

Priced at nearly 25 times trailing earnings, Lockheed Martin is clearly the more expensive stock relative to Boeing's P/E ratio of closer to 19. And drilling down to the free cash flow numbers that most intrigue Morgan Stanley, we find Boeing generating $14.1 billion in cash profit over the past year (40% better than reported earnings, according to data provided by S&P Global Market Intelligence). In contrast, Lockheed Martin's trailing FCF number is just $1.1 billion -- 65% worse than its reported $3.1 billion in GAAP net income.

With a better share price, a more diversified business, and a better projected growth rate, Boeing looks like a much better bargain than Lockheed Martin today. Morgan Stanley is right to upgrade the former and to downgrade the latter.

Why Boeing Stock Is Gaining Today
371%