On Jan. 8, Samsung (NASDAQOTH: SSNLF) published its earning guidance for the fourth quarter of 2018 -- and it wasn't great. 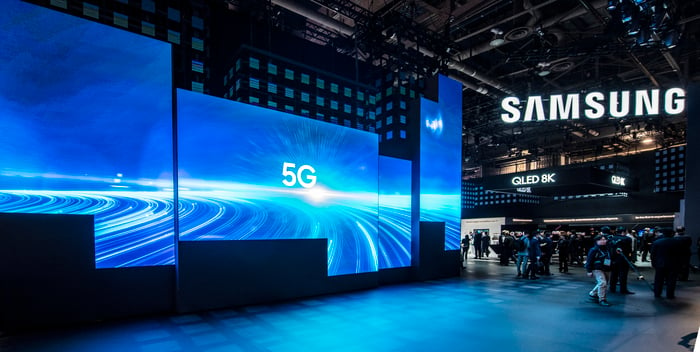 Compared to what the company delivered a year ago, however, these numbers look bad. Let's take a closer look at that comparison and why investors should care.

In the fourth quarter of 2017, Samsung reported revenue of 65.98 trillion Korean won (approximately $59 billion at current exchange rates) and operating profit of 15.15 trillion Korean won (a little over $13.5 billion). The numbers that Samsung is telling investors to expect for the fourth quarter of 2018 are down nearly 10.6% and 28.7%, respectively.

Put simply, both Samsung's revenue and profits are moving in the wrong direction -- down.

It's not enough, though, to just look at the numbers. We need to understand why the company's financial performance is trending the way it is.

Samsung blamed the quarter-over-quarter earnings decline on two key factors. The first was "lackluster demand in the memory business," and the second was "intensifying competition in the smartphone business."

For those of you who have been following other memory and/or smartphone makers, these big-picture perspectives shouldn't be too surprising. DRAM and NAND flash prices -- the key commodities that make up the bulk of Samsung's semiconductor business -- have been on the decline and Chinese smartphone makers have quickly been gaining share on the back of aggressive smartphone designs and equally aggressive pricing.

On the memory front, Samsung blamed, in particular, "weaker-than-expected demand amid inventory adjustments at data-center customers, resulting in a decline in shipments and a greater-than-expected decrease in [average selling price]."

What's coming up next?

The company admitted that it's bracing for "earnings to remain subdued in the first quarter of 2019 due to difficult conditions for the memory business, but strengthen in the second half on expected improvements in the memory market."

Keep in mind that while Samsung expects improvements in the memory market during the second half of 2019, there's no guarantee that those improvements will materialize. So, if you're a Samsung investor or are thinking of becoming one, just understand that there's always a degree of uncertainty whenever it comes to future financial projections -- especially in cases like these where Samsung is making a call about industry conditions that it can't necessarily control.

As far as smartphones go, Samsung said the following: "We will fortify our leadership via technological innovations, which include foldable and 5G models, while also strengthening specifications of our entry-level to mid-range devices."

What this tells me is that Samsung isn't going to wait for the smartphone market itself to improve or to hope that the competition will get less fierce (that's a virtual impossibility), so it's going to put the pedal to the proverbial metal to try to improve its own competitive positioning in a bid to maximize market share and profits.