Apple (NASDAQ:AAPL) has an iPhone problem. The tech giant slashed its first-quarter guidance earlier this month to reflect tumbling sales in China and consumers' unwillingness to upgrade to the company's latest ultra-expensive phones in developed markets. This came on the heels of Apple's decision to stop reporting unit sales for its devices, a move that turned out to be a canary in a coal mine.

Apple CEO Tim Cook appeared on CNBC's Mad Money on Tuesday evening to defend the company and paint an optimistic picture. He downplayed the importance of the iPhone, saying:

In our last fiscal year, we had $100 billion of revenue that was not iPhone, $100 billion. And in this last quarter, if you take everything outside of iPhone, it grew at 19 percent. Nineteen percent on a huge business.

Cook is technically correct. Apple generated $266 billion of revenue in fiscal 2018, and about $167 billion came from iPhone sales. The remaining $100 billion or so came from iPads, Macs, services, and Apple's other products.

But Cook is implying that this revenue is independent from the iPhone -- that slumping iPhone sales are irrelevant to this significant chunk of Apple's business. He's wrong.

Let's do a thought experiment. Imagine that you wake up tomorrow morning and every iPhone has been replaced by an Android phone and Apple has stopped selling iPhones completely. Obviously, Apple's iPhone revenue goes to zero. But what about that $100 billion of non-iPhone revenue? 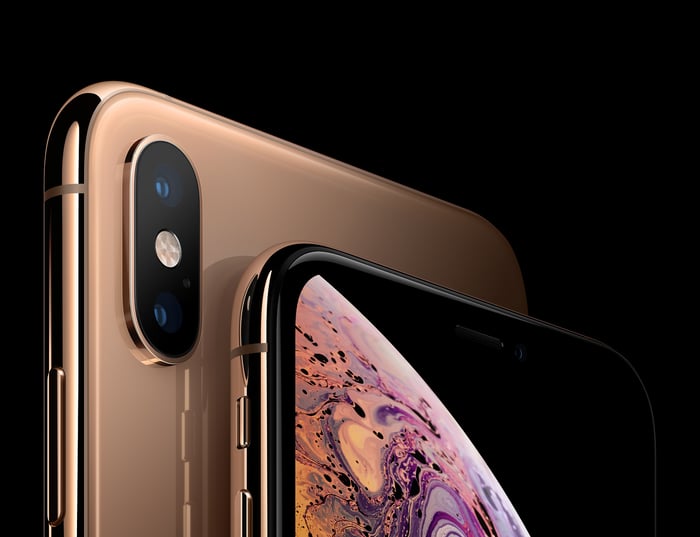 Some of it would be largely unaffected. Sales of Macs and iPads probably don't depend on iPhone sales. That's about $44 billion of annual revenue left unscathed.

Services are a different story. Apple generated $37 billion from services in fiscal 2018, but much of that revenue is dependent on either iPhone sales or the iPhone user base. AppleCare, the company's extended-warranty offering, is a good example. AppleCare revenue is a function of iPhone sales -- it's undoubtedly tied to the iPhone. In fact, an analyst at Morgan Stanley blamed the slowdown in Apple's services revenue growth in the first quarter on a shortfall in AppleCare revenue due to declining iPhone sales.

The App Store is another component of Apple's services revenue tied to the iPhone. Apple's annual revenue from the App Store, which the company doesn't report, likely exceeds $10 billion. The company takes a 30% cut of all app sales, as well as a smaller cut from subscriptions. A stagnant or shrinking iPhone user base is bad news for Apple's App Store revenue.

Then there's the massive payments Apple receives from Alphabet's Google. Google is reportedly paying Apple $9 billion in 2018 and $12 billion in 2019 to keep its search engine the default on Safari, which is the default browser for all of Apple's devices. It's not clear how accurate those numbers are, but that revenue is dependent on how many iPhones are out in the wild.

Beyond services, Apple's other products aren't entirely unshackled from the iPhone, either. The Apple Watch can do a lot without a nearby iPhone, depending on the model. But it doesn't work with Android phones and requires an iPhone to set up the device. Ultimately, the Apple Watch is an iPhone accessory. Other products, like AirPods and Apple TV, don't require an iPhone.

A large part of Apple's $100 billion of non-iPhone revenue still depends on the success of the iPhone. Only a small part of Apple's total revenue is completely independent from the blockbuster device. An iPhone slowdown doesn't just mean lower iPhone sales. It also puts pressure on a large swath of Apple's other businesses.

Apple is more dependent on the iPhone than the numbers suggest. Apple investors should be concerned that the CEO doesn't seem to understand that.