Apple (NASDAQ:AAPL) made a lot of investors upset last week when it announced iPhone sales missed expectations for the fourth quarter. It tried to soften the blow by pointing to its services revenue.

"Services generated over $10.8 billion in revenue during the quarter, growing to a new quarterly record in every geographic segment, and we are on track to achieve our goal of doubling the size of this business from 2016 to 2020," CEO Tim Cook wrote in a letter to shareholders.

Apple is getting more aggressive with its services business, viewing things like Apple Music and iTunes as stand-alone products, not just something that helps sell more hardware. That's evidenced by two recent moves the company made: It started streaming Apple Music on Amazon (NASDAQ:AMZN) Echo devices, and it's integrating iTunes with new Samsung (NASDAQOTH: SSNLF) smart TVs. 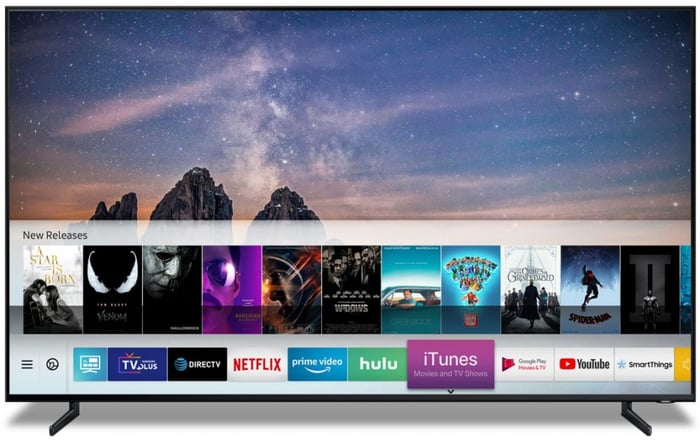 Until recently, the easiest way to get direct access to iTunes on a television set was by buying an Apple TV. The little set-top box device is very similar to products from Roku (NASDAQ:ROKU), which has also recently made a shift to focus heavily on its services business. (Of course, Roku's hardware business is about one-thousandth the size of Apple's hardware business.)

In March of last year, Roku partnered with Samsung to put the Roku Channel on Samsung smart TVs. The move is even more surprising than Apple's because Roku competes in the smart TV marketplace. Its operating system is pre-installed on about 25% of smart TVs sold in the U.S.

But Samsung sells even more smart TVs. The company took one-third of the market last year, according to Statista. That kind of reach is particularly valuable for a services business even if it competes in the same hardware market.

Likewise, Apple's decision to work with Amazon to support Apple Music on Alexa devices is about maximizing reach. Amazon management revealed the company has sold 100 million Alexa-enabled devices. That's far more than any competitor, including Apple with its HomePod. Apple sold just 3 million HomePod units through the first half of 2018, according to estimates.

Apple's shift to maximize the reach of services like iTunes and Apple Music is indicative that it's no longer solely focused on selling high-margin hardware. It's just as interested in selling even higher-margin services. That could cost the company some revenue, but based on its fourth-quarter warning, its hardware sales are already difficult to improve upon and more subject to macroeconomic forces. Few people will cancel their $10-per-month music subscription to save money, but they'll forego buying a new $1,000 phone.

What's ahead for Apple?

The biggest service in Apple's pipeline is its efforts in streaming video. The company is pouring cash into new original series and films, and many expect it to release some sort of streaming-video service later this year.

A report in October suggested Apple might give iOS users free access to the $1 billion in original content it's producing as a way to entice consumers to buy Apple hardware and sell more premium subscriptions to other video services. But that strategy doesn't quite fit with the recent string of moves to extend the company's services to third-party platforms.

With iTunes available on Samsung smart TVs, that could open the door for Apple to collect its share of subscription revenue by upselling customers to other streaming platforms. Still, Samsung would probably want a cut as well. More likely, Apple will charge customers for access to its content and work to make it available on as many popular platforms as possible. That could mean a partnership with Roku and Amazon as well.

A change in perspective

Most interesting in all of this is that Apple may now be on the other end of things when it comes to subscription revenue. Subscriptions sold through the App Store on iOS devices pay Apple 30% of revenue for the first year and 15% of revenue after that. As Apple starts offering services on other platforms, it'll have to pay a distribution fee to the platform owners.

That's important to consider, as it cuts into Apple's profit margin on its services business. That will have minimal impact in 2019, but if the company continues to expand its services to more platforms and the variety of services it offers, it could become a significant factor in the long term.