A pair of deals with connected-car companies point to the tech giant's intentions in the space.

Amazon (AMZN 3.15%) recently made two significant moves toward grabbing a piece of the growing connected-car market. The first was a new partnership with Telenav, a leading connected-car and location-based services company, that will bring the Alexa voice assistant to in-car navigation systems.

The addition of Alexa will allow drivers to interact with nearly all aspects of those systems by voice, including asking for directions and checking traffic. And if they own an Echo speaker, it will interact with their car. For instance, if a car owner makes a restaurant reservation through Alexa while at home, directions to the restaurant will be automatically sent to their vehicle.

In addition, Amazon said it's working with HERE Technologies, which makes navigation systems for vehicles, to bring Alexa into that company's tech. HERE users, too, will be able to use voice commands through Alexa to control the navigation system, or ask it questions like, "Where is the nearest grocery store on my way home?" and have the system plan out a route. 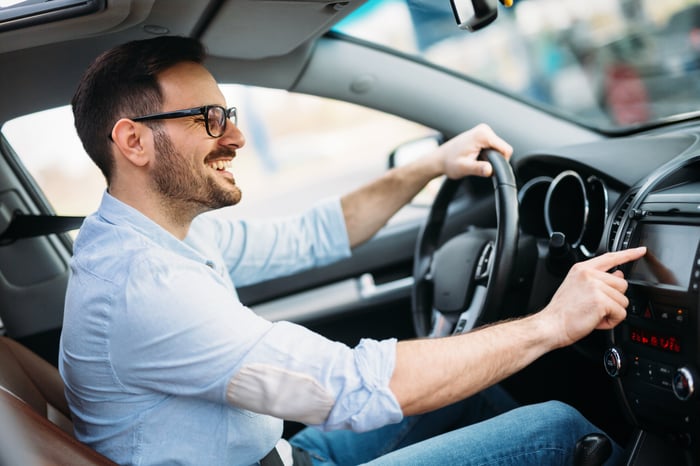 Based on these deals, Amazon is clearly getting more serious about staking out a claim in connected vehicles. That's a smart move considering its tech rivals Apple and Alphabet's Waymo are already making progress in this space.

Making inroads in the connected-car market

Amazon didn't say how it intends to make money from integrating Alexa  into vehicles, but one potential benefit could derive from collecting data from destination searches, reservations, routes, and other Alexa inquiries, and then using that information to fine tune the company's advertising.

Amazon is now the third-largest digital ad company in the U.S., behind Google and Facebook. Tapping into Alexa data from vehicles could help Amazon better understand its users and, in turn, help the company sell ads that are more relevant to them.

Even if Amazon doesn't end up using the connected-car data in that way, the company likely sees its partnerships with Telenav and HERE as giving it a foot in the door of a burgeoning market. The global connected car market was worth just $63 billion in 2017, but it's expected to more than triple to $225 billion by 2025, according to Allied Market Research.

Elsewhere in the connected-car market, Apple is now rumored to be focused on developing its own autonomous driving system, which may debut between 2023 and 2025. Meanwhile, Alphabet's Waymo has already launched a driverless commercial ride-hailing service, and wants to license its autonomous-vehicle technology to automakers.

Amazon can't compete with Apple and Google in the autonomous vehicle space, but it can make a place for itself in connected cars with the most popular digital voice assistant. The market is still in its early stages, so investors will need to be patient as they wait to see how Amazon's strategy pans out. But getting Alexa into as many vehicles as possible is a great first step.