Activision Blizzard and iQiyi, promising entertainment stocks, might do it within the next two years.

2018 ended on a bit of a rough note, with stocks seeing pronounced sell-offs in the last few months of the year. That raised questions about what twists and turns the market might take in 2019, but one result of the recent detour into bearish territory is that some promising companies trade at big discounts relative to where they were priced over the last 12 months.

Within that group, risk-tolerant investors should consider buying shares of Activision Blizzard (ATVI -0.09%) and iQiyi (IQ 4.60%), two entertainment stocks trading well off recent highs that could snap back and see their share prices double over the next two years. 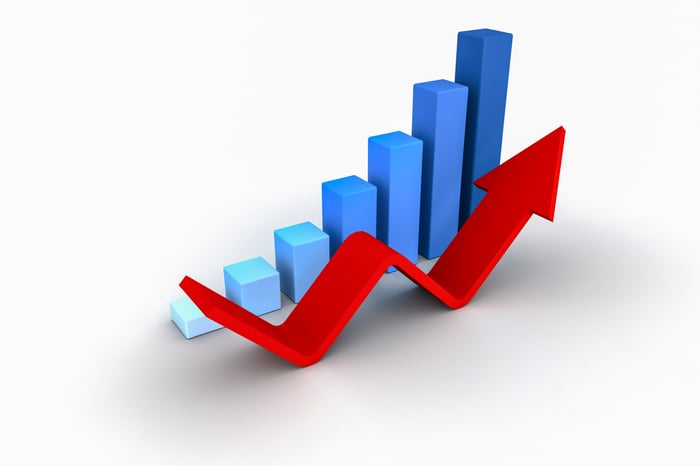 iQiyi was spun off from Chinese search leader Baidu at the end of last March, pricing its initial public offering at $18 per share. The stock had a rough start, as its market debut coincided with rising trade tensions between the U.S. and China, and concerns about the business's profitability dragged its share price below $16 in the week of trading that followed.

But the streaming-video company's valuation recovered not long after. The promise of streaming growth in the Chinese market, a first-quarter report showing strong sales momentum, and a string of promising announcements helped shares climb to as high as $46 last summer. 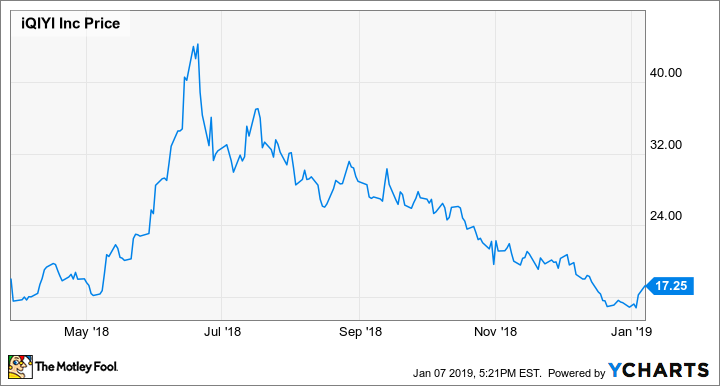 iQiyi's subsequent quarterly reports have showed rapidly accelerating losses. Concerns about competition from Tencent and Alibaba, along with uncertainty surrounding the Chinese government's censorship and entertainment-content regulations, have reversed the stock's gains. Shares once again trade below the company's IPO price, but investors shouldn't count iQiyi out.

The most pressing concern for shareholders is that losses are accelerating as the company goes all in on producing and licensing new content, with the business's net loss coming in at $63.1 million in the first quarter, $316.9 million in the second quarter, and $457.3 million in the third. Subsequent moves to secure more funding signaled that spending is going to continue in the near term -- and sent some investors heading for the exits. The good news is that iQiyi's big spending is producing real results, helping to propel strong sales and paid-user additions. And there's still a promising runway for growth in the Chinese streaming market.

Most recent coverage of China's economy has focused on some economic slowdown, but the long-term outlook for the country's entertainment industry remains promising. iQiyi counted roughly 81 million paid subscribers at the end of September, up from roughly 50 million at the start of 2018 and just 5 million paid subscribers in May 2015 -- and the country's video streaming market will likely continue to grow at a rapid clip and provide a favorable operating backdrop.

In addition to its paid-user base, iQiyi also counts about 400 million viewers through its ad-supported platform, and it has an opportunity to convert more of those users to its premium offerings. As the company's subscriber base grows and average revenue per user is increased through price hikes and in-content microtransactions, the company should be able to improve the profitability of its core business while also driving growth through avenues like merchandising and licensing content to third parties.

Volatility in the Chinese market could continue to drag on the stock, but the long-term outlook for the company's bid for the country's streaming video market does not appear to have shifted substantially, and iQiyi has the potential to bounce back to deliver big returns for shareholders.

One successful new game could do it

Video game developer and publisher Activision Blizzard continues to enjoy a promising position in an industry that has lots of room for expansion, but the market appears to have reassessed Activision's growth outlook. Shares are down roughly 40% over the last three months as a confluence of factors has prompted some investors to sour on the stock.

Bedrock franchises like World of Warcraft continue to age, and some investors are concerned that the company isn't delivering the types of experiences that gamers want. The runaway success of Fortnite (a competing product from Epic Games) and a negative fan response to Activision Blizzard's upcoming Diablo game for mobile platforms have heightened those concerns. Weaker prospects in China due to an economic slowdown and hurdles presented by the country's content regulations also appear to be complicating the company's international growth initiatives. 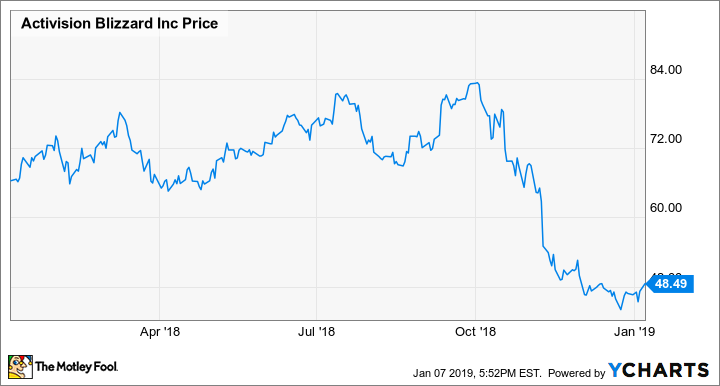 The company published uninspiring third-quarter results in November that seemed to highlight many of the challenges facing the business, but it still looks primed to benefit from (and help spur) gaming industry growth. Newzoo estimates that the global games market will grow to roughly $180 billion in 2020, up from roughly $138 billion in 2018, with much of that growth being powered by the mobile segment of the industry.

That's an area that Activision is devoting more attention to, with plans to bring many of its biggest properties to phones and tablets. The publisher's impressive collection of gaming franchises and top-tier development studios give it a good chance of success on that front.

Activision Blizzard should also continue to benefit from growth in recurrent consumer spending and the shift in game sales from brick-and-mortar retail outlets like GameStop and Walmart to digital distribution. The long-term outlook is that more people around the globe will play video games and that gaming will account for an increasing share of overall entertainment time. Over the last three decades, interactive entertainment has grown from a niche hobby to one of the most popular recreational activities in the world, but video games are still relatively young as a medium and an industry.

Activision Blizzard thinks that it can parlay its game-play expertise and the popularity of its franchises into a multimedia empire that's reminiscent of what Disney has built. Those ambitions might take awhile to fully materialize, but the company's long-term prospects remain promising. The video game industry continues to successfully branch into new territory, with the rapid rise of esports and gaming merchandise  providing the evidence of demand for gaming products and experiences outside of the traditional channels.

With a decadelong time horizon, Activision Blizzard stock has serious multibagger potential. Taking a shorter view that's less dependent on the success of the company's various multimedia endeavors, it wouldn't be surprising to see the stock double within the next couple of years if the company introduces a successful new game.

Should You Buy Actvision Blizzard Stock Before the Microsoft Buyout Is Complete?
366%