E-commerce giant Amazon.com (NASDAQ:AMZN) has earned the top spot in the stock universe, with its market capitalization moving above those of some of its biggest rivals in the tech space, including Apple (NASDAQ:AAPL) and Microsoft (NASDAQ:MSFT). Even though Amazon stock suffered punishing declines during the last part of the year, it nevertheless saw solid gains in 2018, easily outperforming the losses from the broader stock market.

Yet Amazon has thus far failed to do something that Microsoft and Apple have done for years: pay its shareholders a dividend. Amazon has been content to reinvest all of its cash flow back into its business, but some believe that the stock might do better if it joined the trend toward paying dividends. Below, we'll look more closely to see if 2019's the right time for Amazon to make its dividend debut.

Why Amazon should pay a dividend

Tech start-ups are slow to pay dividends. It takes time for these capital-intensive companies to hit their stride, and with so much well-established competition in the tech arena, being premature to return capital to shareholders can result in failing to catch up to one's rivals. That strategy has served Amazon well over the past 20 years, allowing it to take full advantage of strong periods while surviving the inevitable downturns that proved fatal for many of Amazon's weaker counterparts elsewhere in the industry.

But now, Amazon has seen parts of its business reach full maturity. The e-commerce giant's operating cash flow has skyrocketed, rising from less than $5.5 billion five years ago to nearly $26.7 billion over the past 12 months. 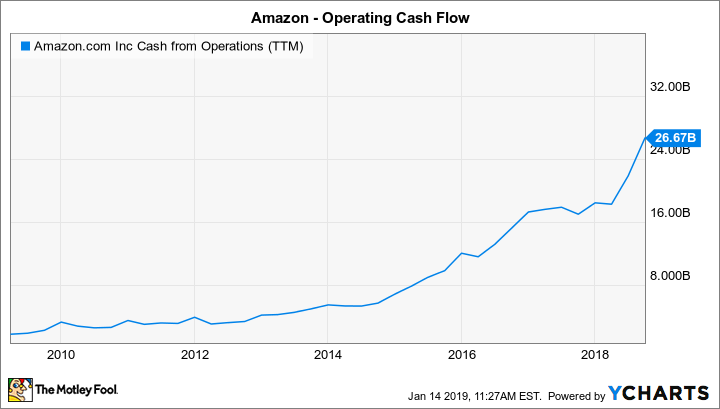 Net income also soared last year, in part because of the beneficial impacts of lower corporate tax rates. After years of dealing with criticism for its minimal attention to its bottom line, Amazon now is consistently profitable and has been growing its earnings dramatically.

Will Amazon need the cash?

That said, Amazon has always found ways to put cash to work, and paying a dividend would take money away from other uses. Lately, it's worked hard to get its balance sheet back in order after its monumental $13.7 billion purchase of Whole Foods Market back in 2017. That purchase reversed three years of efforts to pay down debt, leaving the company with long-term debt of almost $25 billion. Continuing efforts to repay borrowings are likely to continue, especially with interest rates on the rise and the possibility that Amazon will want to make further strategic acquisitions in the future.

Amazon also remains aggressive in spending on capital investment. Total capital expenditures have risen from less than $3.5 billion in 2013 to more than $13 billion over the past 12 months. Businesses like the cloud computing giant Amazon Web Services have plenty of capital requirements, especially as research and development remains necessary in order to satisfy users' growing needs.

The key to Amazon dividends

Perhaps the biggest reason why Amazon hasn't felt any need to pay a dividend is that CEO Jeff Bezos sees no need for the income. Bezos has a 16% stake in Amazon, and any dividends the company paid would have a big tax impact on the CEO. Only if Bezos' income needs were to change would that stance be likely to change.

Moreover, even with its massive cash flow, Amazon doesn't have enough money to pay a huge dividend. With almost a half-billion shares outstanding, it'd take every penny of Amazon's roughly $13 billion in free cash flow over the past 12 months to pay a dividend of about $26 per share. At current prices, that'd be a yield of just over 1.5% -- not even enough to reach the market average.

At this point, it's unlikely that Amazon will start paying a dividend in 2019. However, if the company can keep seeing huge growth in its earnings and cash flow, it might get to the point in the next few years where it could start to think about making at least a modest payout to shareholders.