Diabetes and related conditions affect over 100 million Americans and many more worldwide. Here are three companies helping fight that disease.

Diabetes affects tens of millions of Americans, and even more are at risk of developing diabetes, as they suffer from prediabetes. With such a large population suffering from the condition, it's clearly a disease that gets much attention and investment. We asked three of our contributors to pick a company worth watching that is addressing some aspect of the illness, and they selected Abbott Laboratories (ABT -0.34%),  DexCom (DXCM -1.38%), and Novo Nordisk (NVO 0.69%). 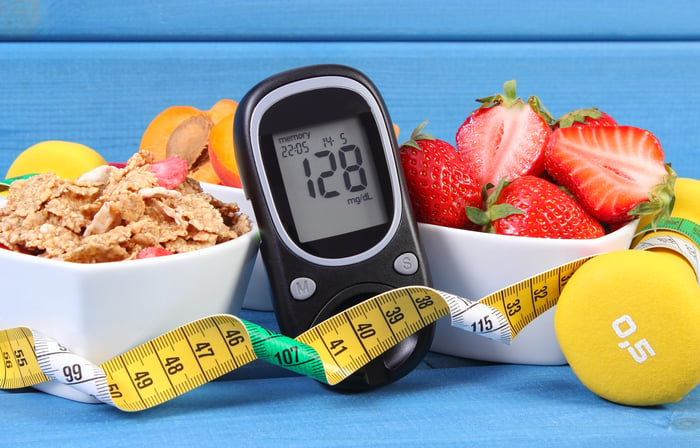 Diabetes and a lot more

Keith Speights (Abbott Laboratories): While the broader market floundered in 2018, Abbott Labs turned in a great performance. Shares of the medical device company soared nearly 27%. The diabetes market was key to Abbott's success.

In Abbott's Q3 earnings call in October, CEO Miles White highlighted the great launch for the company's Freestyle Libre continuous glucose monitoring (CGM) system that doesn't require finger sticks. White said that more than 1 million customers now use the product, an impressive number to achieve in a relatively short time. Sales for Freestyle Libre more than doubled year over year to over $300 million.

Expect Freestyle Libre to continue to drive growth for Abbott in the future. The company also hopes to win U.S. approval to launch version two of the product, which includes an alarm feature that lets users know when their glucose levels are too low or too high.

But Abbott Labs has a lot more going for it. The company is the global leader in minimally invasive surgical solutions for leaky heart valves. And Abbott continues to generate growth from its established pharmaceuticals, nutrition, and electrophysiology businesses.

Abbott has two products to watch in addition to Freestyle Libre. The first is its MitraClip device for mitral valve repair. There's a lot of growth potential for MitraClip, especially if Abbott wins an expanded indication for the device (approval from the FDA for use in more situations). The company also has a pivotal study underway for a new product, Tendyne, that could enable the replacement of damaged mitral heart valves without open-heart surgery.

Innovations like Freestyle Libre in diabetes and Tendyne in structural heart devices make Abbott Labs a stock to keep your eyes on -- in January and beyond.

Todd Campbell (DexCom): What does disruption look like to an investor? How about going from $40 million in annual sales to over $1 billion in annual sales in eight years? That's impressive, but it may only hint at the revenue opportunity ahead for DexCom, the leading maker of continuous glucose monitors (CGMs) for diabetes patients.

In the past, patients with insulin-intensive diabetes had to rely on many finger sticks to provide point-in-time insight into blood sugar. Historically, the haphazard insight offered by finger sticks meant the average patient spent 70% of their time outside their desired blood sugar range, which put them at risk of new symptoms including cardiovascular disease, nerve damage, and blindness -- or even death.

DexCom estimates its current addressable market of insulin-intensive type and type 2 diabetes patients is 3.2 million; however, advances that will make CGMs smarter, smaller, and cheaper could increase that market significantly. Addressing the gestational diabetes market could increase its target market by about 800,000 patients; monitoring patients in hospitals would add about 10 million patients; and serving the entire type 2 diabetes population expands the addressable population to roughly 27 million in the U.S alone.

DexCom's $1.03 billion in sales grew 42% year over year, in part because its newest CGM, the G6, is a part of the automated insulin delivery device from Tandem Diabetes Care (TNDM -0.86%). In 2019 sales are expected to grow up to 20% as the G6 launch spreads. Sales could accelerate even faster when DexCom's next CGM -- the G7 -- is launched in 2020. With double-digit growth on tap and a massive and growing market, I think DexCom's a great stock to consider adding to portfolios now.

The biggest player in the insulin market

Chuck Saletta (Novo Nordisk): Diabetes happens either because your own body can't produce insulin (type 1)  or because your body has become resistant to the insulin it does produce (type 2).  For patients suffering from type 1 diabetes and many who suffer from type 2, treatment with insulin is a critical part of managing the disease. With over 100 million Americans suffering from either diabetes or prediabetes, it's clearly a huge disease -- and insulin is a huge part of fighting it.

That's what makes Novo Nordisk an incredibly important company to watch. Novo Nordisk produces about half the insulin  sold commercially around the world. That makes it something of a barometer when it comes to the overall state of the diabetes industry, and certainly makes it worth watching for investors interested in treating the condition.

Its large market position in the fight against a huge disease gives Novo Nordisk a certain amount of pricing power. It recently increased prices on its insulin products by around 5%, showcasing its belief that it will be able to maintain its strong market position despite those higher prices.

While there's talk of a potential cure for Type 1 diabetes on the horizon, the unfortunate likelihood is that diabetes will be with us for a long time to come. And should a cure actually come about, chances are decent that Novo Nordisk will play a role there too. That makes Novo Nordisk a contender for consideration not just for this month, but for the long haul as well.