AI is here to stay. These three companies are fantastic ways to play the trend.

It may seem like a futuristic concept, but artificial intelligence is already having a massive impact on the world today. Make no mistake, AI is helping to improve everything from advertising to healthcare, robotics, retail, video streaming, gaming, urban development and, well, virtually every other aspect of our modern world.

In fact, in 2017, AI expert Andrew Ng went so far as to compare AI to the next electricity, stating, "Just as electricity transformed almost everything 100 years ago, today I actually have a hard time thinking of an industry that I don't think AI will transform in the next several years."

Perhaps unsurprisingly, our stock market offers investors no shortage of ways to play the rise of AI. So, to help you narrow them down, we asked three top Motley Fool contributors to each discuss an artificial intelligence stock they think you should be watching this month. Read on to learn what they had to say about iRobot (IRBT 0.13%), MongoDB (MDB 1.93%), and Alphabet (GOOG -0.07%) (GOOGL -0.14%). 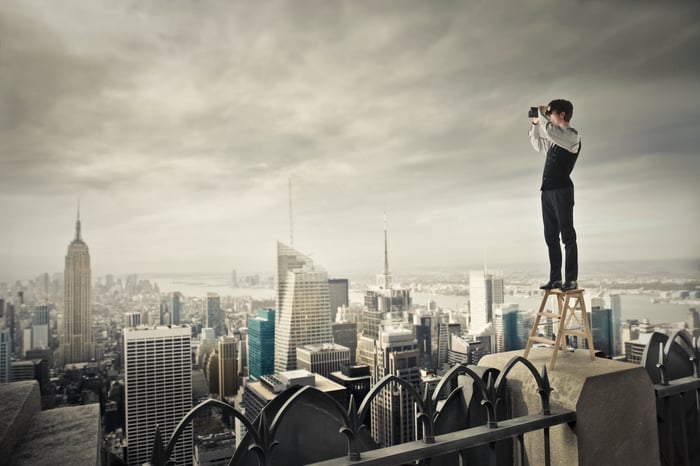 This AI leader could clean up in 2019

Steve Symington (iRobot): It seems an understatement to say iRobot just capped a busy 2018. The home robotics specialist most loudly punctuated its year by launching its smart new self-cleaning Roomba i7+ vacuum model in September, striking a partnership with Google centering on next-gen smart-home technologies in October -- a move that left me to reluctantly speculate that Google might do well to simply acquire iRobot -- and winning a significant ITC patent-infringement case in early December.

However, keeping in mind that iRobot's products are manufactured in China and imported to the U.S., those successes have been largely overshadowed in recent months by concerns over the impact of tariffs on iRobot's bottom line. As I noted in November, though, the move could motivate iRobot to focus more on growing its international presence in areas like Europe and Japan. iRobot has also made it clear they're open to potentially shifting manufacturing to other countries to keep costs down, even as they seek cost-reduction opportunities in the meantime.

So, with iRobot's next quarterly report coming up in early February, I think investors would do well to not only watch the U.S.-China trade negotiations closely, but also listen for any for preliminary updates from iRobot that might shed light on any of the aforementioned recent developments.

Looking at AI from a new perspective

Anders Bylund (MongoDB): You can't build artificial intelligence without feeding it some data. In fact, it takes a whole lot of data to create an effective AI tool. When Google created the innovative chess engine AlphaZero, the system analyzed more than 200 million board positions to create a neural network that could beat not only the best humans, but also every other computer-powered competitor. The more data you feed into an AI system, the smarter it gets.

That's where MongoDB comes in.

MongoDB makes database software. This is not the relational database design your grandfather knows, but a so-called NoSQL platform that can organize many new types of data with a minimal amount of human hand-holding needed to make it work. The eponymous MongoDB database system was built from the ground up to make sense of unorganized data. That's often what you get when you pull in data streams from messy real-world sensors or online inputs from millions of human users.

Developers and business-grade clients are embracing MongoDB's data management model in a hurry. In the recently reported third quarter of 2018, MongoDB's revenues rose 57% above the year-ago reading. Investors are catching on, too -- share prices are riding 160% higher in the last 52 weeks.

In short, MongoDB is a sneaky way to play the AI trend from a different angle. This company holds the keys to exactly the type of hyper-efficient data storage that will enable the next generation of powerful data analysis -- and artificial intelligence platforms.

Don't take your eye off of Alphabet

Chris Neiger (Alphabet): Alphabet uses AI in many parts of its business, including improving its search results, serving up the most relevant online ads, and in services like its Google Translate app.

But one of the most forward-facing ways the company is using its AI is through its ride-hailing company, Waymo. Formerly called Google's self-driving car project, Waymo is the Alphabet subsidiary that recently launched its first commercial version of its autonomous ride-hailing service. Waymo's service allows a select group of people in the Phoenix, Arizona, area to pay to have Waymo's autonomous vehicles drive them around town.

At the core of Waymo's service is the company's artificial intelligence, which processes mountains of visual information -- like traffic lights, other cars, pedestrians, road signs, etc. -- and then tells the car in real-time how to respond. Perfecting this technology is no easy feat, and Waymo has built up its AI vehicle knowledge over many years and now has 10 million miles of real-world road tests.

Launching an autonomous ride-hailing service may seem like a pie-in-the-sky tech project, but there's real financial potential for Alphabet. Some analyst forecasts say Waymo could be worth $70 billion by 2030.

Waymo's service just launched last month, so Alphabet is still at the very early stages of this endeavor. But the company is forging a path in the nascent autonomous vehicle market, and its artificial intelligence is helping it lead the way.