The rail behemoth closes out 2018 with healthy advances in both volume and freight pricing.

CSX ( CSX -0.38% ) reported near double-digit top-line growth to close out the last three months of 2018, as revealed by its fourth-quarter results, released after the close of trading on Wednesday. The railroad operator continued to make appreciable progress in improving efficiency as well. Let's take a bird's-eye view of the earnings release, then walk through salient highlights of the quarter. Note that all comparative numbers in this article are presented against the prior-year quarter (the fourth quarter of 2017). 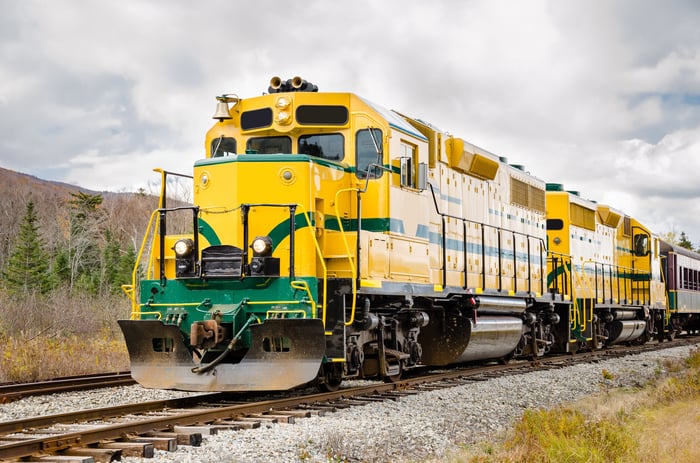 During the company's post-earnings conference call, CEO James Foote discussed specific metrics that continue to optimize under the company's transition to a "precision scheduled railroad" model:

[O]n the efficiency and service side, train velocity saw positive year-over-year and sequential movement, while dwell improved [i.e. decreased] year over year. Only a couple of weeks into 2019, I see positive momentum in both of these metrics, with the company currently seeing record performance in both measures.

..[L]ocomotive miles per day [reflects] the average daily mileage we are able to get out of each locomotive. Locomotives are a significant cost for the company, and by reducing our active fleet, you save on maintenance, fuel, and capital requirements. Improvement in this metric means we need fewer locomotives to move the same amount of freight. Our active locomotive count ended the year down over 300 locomotives, while we grew volume and revenue.

CSX's management doesn't issue a detailed quantitative earnings outlook each quarter. However, executives do provide a bit of general guidance. During the earnings call, Foote advised investors to expect low-single-digit revenue growth in 2019, due to the company's ongoing work on its intermodal lanes, and an expected moderation in export coal prices in the back half of the year.

This represents a deceleration from the organization's full-year 2018 revenue expansion rate of 7%. Still, Foote reiterated CSX's intention to lead peer railroads in operational efficiency this year. In sum, earnings still hold growth potential if CSX can compensate for a slight slowdown in its top line with further decreases in operational expense.