Kroger and Microsoft team up to take on Amazon Go and Whole Foods.

As someone who loves to eat -- and I mean, loves -- I've enjoyed following the current upheaval going on in the grocery industry. The gauntlet was thrown down in June 2017, when Amazon announced it was acquiring Whole Foods Market. The news quickly sent shares of all grocery chain stocks down sharply, Kroger (KR 1.51%) included.

However, I wrote that year -- and continue to believe -- that just because Amazon is making a big push into groceries doesn't mean that Kroger, the largest pure-play grocer in the country (and second only to Walmart overall), is out for the count.

Kroger recently made yet another in a series of tech-forward initiatives to counter the Amazon-Whole Foods challenge. The company announced a partnership with Microsoft (MSFT 3.42%) to pilot two new "smart" grocery stores, using cutting-edge technology and AI to deliver a next generation grocery experience. 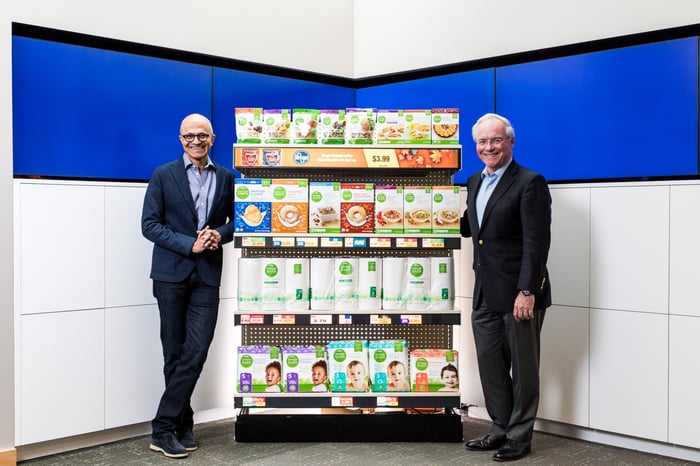 Nadella and McMullen team up

According to the press release put out by the two companies, the Kroger-Microsoft partnership will "pilot a connected store experience and together ... jointly market a commercial RaaS product to the industry."

What is RaaS? That would be "retail-as-a-service," continuing the current trend of big tech firms offering outsourced IT services for other businesses. Instead of buying data centers themselves, enterprises are now renting infrastructure-as-a-service computing and storage functions from cloud giants. Enterprise software, traditionally purchased once and installed on premise, can now be delivered over the internet via the cloud on a subscription basis.

Interestingly, the new RaaS service will be jointly marketed by Kroger and Microsoft, which means at least some of the innovation is coming from the traditional business of Kroger. By building a service, Kroger can potentially offer a new tech-enabled store format to other retailers. That's an interesting twist.

Two pilot stores will be opened, one near Kroger's headquarters in Monroe, Ohio, and another near Microsoft's headquarters in Redmond, Washington. According to the press release, the new format will be an "ecosystem driven by data and technology to provide our customers with personalized food inspiration."

Specifically, the format will feature EDGE Digital Displays on store shelves (instead of traditional paper tags) to give shoppers information such as price and nutritional content, along with Kroger's Scan, Bag, & Go tool, which lets them avoid checkout lines. These features will then be linked to a customer's shopping lists and order history. Linking personal data and video analytics will enable hyper-targeted ads in-store via the EDGE Displays. When you walk along the aisles, the digital tags will change their picture to alert you to which items are on your list and you'll have access to digital coupons that can be activated by scanning a QR code via your smartphone.

All of this, of course, will be powered by Microsoft's Azure cloud infrastructure platform, along with its latest big data, enterprise software, and AI capabilities.

Not totally revolutionary, but keeping pace

Of course, the new "smart" grocery store isn't a totally new concept. Amazon is rolling out its new Amazon Go cashier-less store format, with plans for 3,000 Go stores by 2021. Amazon is also expanding Whole Foods grocery stores into under-penetrated areas of the U.S., according to recent reports.

In China, the smart retail concept is also alive and well. Companies like Alibaba and JD.com are already well into their own concepts -- Alibaba with its Hema grocery stores, and JD.com with its own third-party retail-as-a-service offering, along with its smart JD.ID X-Mart convenience store format.

In that light, the Microsoft-Kroger tie-up doesn't seem so forward-looking, but rather like a somewhat inevitable tie-up. Microsoft finds a way to get into the smart-retail business, while Kroger gets access to leading cloud and big-data technology.

For Kroger, the smart-store concept follows several new initiatives under the company's Restock Kroger program, unveiled in the fall of 2017. Among them Kroger has expanded its Scan, Bag, & Go tech and Clicklist pick-up service. Kroger also purchased meal kit company Home Kit, and took a 5% stake in Ocado, a British company that provides automated warehouse tech, which Kroger will help roll out across the U.S. this year.

As the new Microsoft partnership shows, Kroger isn't afraid to try just about anything to adapt to the new online-to-offline world. While it's a positive that Kroger isn't being complacent, the company still has to be careful about diverting its attention to too many disparate initiatives and losing focus. Still, it will be exciting to see which new format "wins" the near future of grocery.

Check out the latest Microsoft and Kroger earnings call transcripts.