Following a February 2018 initial public offering, shares of North American airport retailer Hudson (NYSE:HUD) experienced mild appreciation, then succumbed to the general stock market malaise in the back half of the year. The stock finished down roughly 10% in 2018. However, while the overall market environment for equities has stabilized slightly in early 2019, the selling in Hudson shares has accelerated: 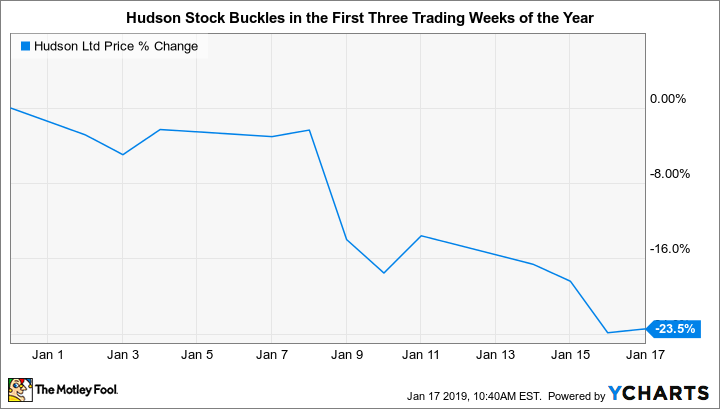 The catalyst behind Hudson's continued price decline is a press release issued on Jan. 14, which contained preliminary fourth-quarter 2018 sales results.

The fourth-quarter numbers place Hudson's full-year top-line expansion at 6.9% against 2017, to $1.89 billion. Organic revenue growth improved by 7.1% against the prior year.

These numbers proved problematic for investors, as growth had already exhibited signs of curtailment in the third quarter. While a quarterly organic top-line improvement of nearly 5% is credible performance for a retailer in the current economic climate, it's below Hudson's long-term growth trajectory.

As I discussed in September, Hudson averaged annual organic growth of 9.4% in the eight years before it went public. The company's financial framework going forward also assumes vigorous top-line improvement, as seen in this slide from an investor presentation released earlier this week: 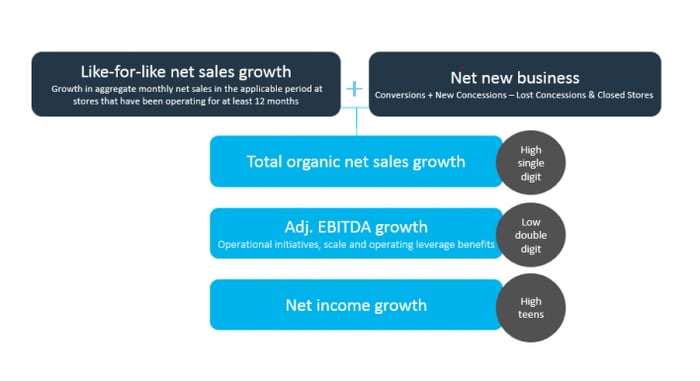 In order to achieve long-term net income growth in the high teens, Hudson is relying on "high single-digit" annual organic sales expansion. Most investors likely interpret this number to be in the ballpark of 9%, which Hudson has hit yearly for the better part of the last decade, hence the unsavory reaction to a report hinting at more tepid near-term growth.

The selling in Hudson stock has probably also intensified because of the ongoing U.S. government shutdown. The impasse in Congress has created the longest shutdown in U.S. history, and increasingly long security-screening lines in U.S. airports due to reduced Transportation Safety Administration (TSA) personnel are a visible manifestation of the potentially chilling effect on commerce.

Hudson derives 81% of its revenue from the U.S., and nearly all of that from airport retail locations; thus, uncertainty over the shutdown and its effect on first-quarter 2019 performance is likely furnishing another drag on shares. 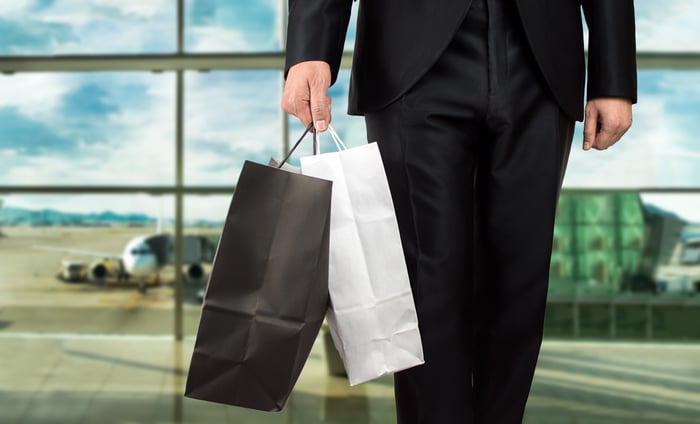 A discount on Hudson stock

Investors will have to wait until mid-March for the company's year-end 2018 earnings report, which will provide detail behind the current near-term deceleration in sales, as well as the retailer's outlook for 2019.

Yet shares appear attractive just now. Many factors support Hudson's high-single-digit growth rate target over a longer time horizon. Foremost among these is a vibrant market opportunity. Hudson projects a compound annual growth rate (CAGR) of 3% for North American air passenger volume through 2025. Management has also recently pointed out that passenger retail spending at airports has increased at a CAGR of 4% over the last 11 years.

Together, these trends indicate a baseline market opportunity growth rate of 7% annually. In other words, the company has a clear path to amplifying its own organic revenue by roughly 7% each year, placing the 9% target within reach.

Hudson will also benefit from expansion and renewal projects by mid-tier and large North American airports. Renovation and modernization investments by North American airports are expected to reach $100 billion by 2021, opening up new retail space for Hudson to bid on. Finally, the company's push to capitalize on brisk sales in the "grab and go" food-concessions category should provide it with an additional top-line stimulus.

Due to their rapid January descent, Hudson shares are now priced at 14 times forward-one-year earnings. This places the company at a 30% discount to companies in the Russell 2000 Index. These small-capitalization peer companies presently trade, on average, at over 20 times forward earnings.

Hudson is more in line with the subset of the index known as the Russell 2000 Value Index, which trades in the aggregate at 14.7 times forward earnings. Indeed, value-oriented investors may already find Hudson shares to be priced for purchase at the outset of 2019.