Netflix was hit with a $25 million lawsuit for trademark infringement over the weekend.

Netflix (NFLX -3.40%) launched its first adult interactive film Black Mirror: Bandersnatch on Dec. 28, to much praise for how it executed the complex new show format. The show, which lets viewers choose which direction the story goes at different crucial plot points, is estimated to have over one trillion possible story combinations.

However, the powerful streamer has now been slapped with a $25 million lawsuit from the original Choose Your Own Adventure publisher, Chooseco. While Netflix didn't use the words "choose your own adventure" in its ads and marketing for the new series, the phrase was used by the film's protagonist in passing conversation. The publisher is requesting either $25 million or Netflix's profits from the movie, whichever is greater. 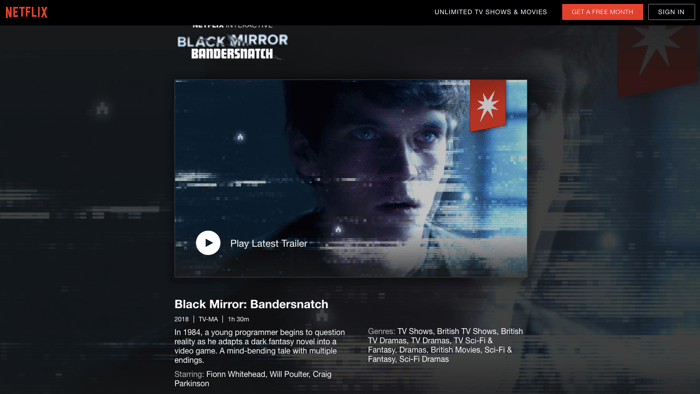 Choose Your Own Adventure creator comes for Netflix

In its lawsuit, Chooseco, an independent publisher, said that its loyal audience has been confused into thinking its clean, family-friendly brand is associated with the graphic, violent Bandersnatch film. The publisher says that this could hurt future book sales and licensing deals.

"We have received an unprecedented amount of outreach from people who believed we were associated with the creation of this film, including parents who were concerned that we had aligned the CYOA brand they knew and loved with content that surprised and offended them," the lawsuit reads.

Even before the release of Bandersnatch on Dec. 28, Chooseco says it had already sent a written cease-and-desist request to Netflix. The main complaint is that within the first few minutes of Bandersnatch, the main character refers to a book as a Choose Your Own Adventure story. Chooseco says this links the film to the publisher and infringes upon its trademarked name.

The publisher has reason to be worried about the loss of its trademarked brand, considering nearly every mention of Bandersnatch in the media also either references Chooseco's popular book series or at least uses the descriptive phrase "choose your own adventure" to help people understand how the film works. Media outlets that made these references in the title or body of their articles about Bandersnatch prior to the filing of the lawsuit include The New York Times, The Washington Post, USA Today, Vox, The Wrap, NPR, The Daily Beast, and Variety.

To add to the seriousness of the lawsuit, the publisher noted that Twenty-First Century Fox's (FOXA) (FOX) movie studio actually does have an options contract with Chooseco to create a Choose Your Own Adventure film series. Netflix's association with the publisher will make this potential series appear less valuable to the studio because it no longer feels exclusive.

Can Netflix fight back on this?

Netflix was bold to have its protagonist reference a Choose book within the first few minutes of the film. But that's not even the full extent of its boldness. Back in 2016, Netflix actually did reach out to Chooseco to work on buying a license to use the brand's name, but ended up abandoning talks. That suggests that Netflix's team of lawyers felt that even if a lawsuit came up with Chooseco, they could win it.

Indeed, lawsuits over the use of trademarks in expressive works are hard to win, according to legal news service Law360. That's because artistic works like Netflix's film have protection under the First Amendment. The burden of proof is on Chooseco to prove that Netflix's reference to a Choose Your Own Adventure book in its film had "no artistic relevance to the underlying work" or was used to "explicitly mislead" the audience as to the source of the work. And it's hard to imagine the public mixing up a graphic 2018 film with children's books published from 1979 to 1998.

An added difficulty is that the phrase has become generic over time, and most people don't associate it with Chooseco's books. But you can see the publisher's frustration. Because of Chooseco, everyone immediately knows what the phrase "choose your own adventure" means in reference to books or movies. That short phrase is the best way to quickly and accurately explain how Bandersnatch works, and that's why media companies are linking the two together.

So Netflix, a huge public company, appears to be benefiting from a brand built by Chooseco, a small independent publisher, even though Netflix never paid for licensing. But I guess that's business.