General Motors (NYSE:GM) said that its Cadillac luxury brand will lead its electric-vehicle (EV) charge -- and it showed two renderings of a radically styled Cadillac SUV that it said will be the first vehicle to be built using its upcoming advanced battery-electric architecture.

What we know about the electric Cadillac

GM didn't tell us a whole lot about the upcoming battery-powered Cadillac, which was revealed as a surprise by brand president Steve Carlisle at an event showcasing the new Cadillac XT6. The renderings show a crossover SUV with styling that takes current Cadillac design themes in a futuristic direction.

"Cadillac's EV will hit the heart of the crossover market and meet the needs of customers around the world," Carlisle said. "It will represent the height of luxury and innovation while positioning Cadillac as the pinnacle of mobility."

From the renderings, and by reading between the lines of what Carlisle said, we can assume with some confidence that the new electric Cadillac is a midsize "two-row" (five-passenger) crossover SUV. It'll almost certainly be a dual-motor all-wheel-drive design with an EPA-rated range of at least 300 miles, and it'll likely be packaged and priced to give the similarly sized upcoming Tesla Model Y some serious competition. But beyond that, it's hard to say.

We don't even know for sure when it will arrive, though Carlisle said that it might arrive in 2021. But we do know one other thing: Carlisle said that the new Cadillac will be the first vehicle to be launched on GM's upcoming new electric-vehicle architecture, called BEV3. 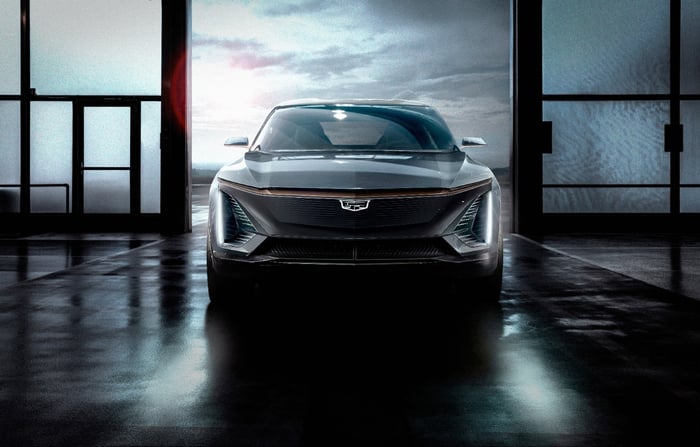 GM revealed the existence of BEV3 in a series of presentations in late 2017. BEV3 is a "modular" vehicle architecture for battery-electric vehicles, one that will allow many different types of vehicles to share parts and engineering. The automaker has said that BEV3 has been designed for maximum flexibility: It can be used for cars and SUVs, with front-, rear-, or all-wheel-drive as needed, and with battery packs of several different sizes.

A key part of the BEV3 architecture is a new battery system, previewed by GM in late 2017. The upcoming battery system is more energy-dense than the system used in the Chevrolet Bolt EV, with a flexible design that enables thinner battery packs. It's also cheaper: GM said its cell cost will fall from about $145 per kilowatt-hour (in late 2017) to under $100 per kilowatt-hour when BEV3 is launched.

GM's president and global product chief, Mark Reuss, said in a recent presentation that BEV3's battery packs are also modular. He compared them to ice-cube trays:

You can put in as much water to make as many cubes as you need. The tray still takes up the same amount of space in the freezer. This gives us astounding flexibility across the vehicle portfolio, and allows us to achieve two things: The broad range needs and price points that our customers desire, and because we'll have the highest degree of scale, tremendous cost savings.

The scale will indeed be vast: Reuss said that BEV3 will be used for GM vehicles around the world, ranging from affordable Chevrolets to high-end Cadillacs. That scale is the key to a promise made by CEO Mary Barra: All of the electric vehicles built on BEV3 will be profitable for GM.

It will take time to realize that scale, of course. But by launching BEV3 with a high-profit-margin Cadillac crossover, GM is giving itself a good chance to deliver on that promise.