Biopharma heavyweight Bristol-Myers Squibb ( BMY 0.84% ) saw its shares sink by a staggering 15.2% in 2018, according to data from S&P Global Market Intelligence. What caused investors to hit the exits last year?

While biopharma stocks in general performed rather poorly in 2018 due to a bevy of headwinds, Bristol's stock was particularly hard hit due to its star immuno-oncology drug, Opdivo, losing significant ground to Merck's ( MRK -0.74% ) Keytruda over the course of the year. 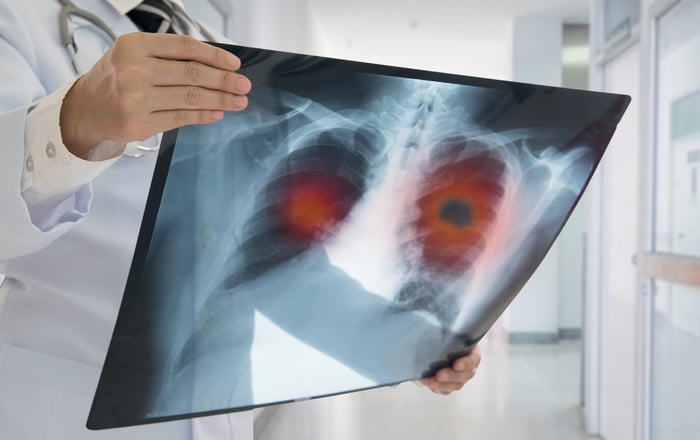 The long and short of it is that Merck's Keytruda was able to solidify its already-dominant position in untreated lung cancer during 2018. The net result -- and the issue that seems to  have weighed most heavily on Bristol's shares last year -- is that Keytruda's win in front-line lung cancer should allow to it generate nearly $2 billion a year more in sales than Opdivo once these drugs reach their commercial peaks in the next five years, according to a report by EvaluatePharma. Two short years ago, though, industry insiders widely believed the opposite would be the case.

With Merck taking the pole position in first-line lung cancer with Keytruda last year, Bristol decided to kick off 2019 with the massive acquisition of cancer specialist Celgene Corporation ( CELG ). This megamerger -- if it proceeds as planned -- would instantly transform Bristol into a top dog in the high-value oncology space. Celgene, after all, sports a rich pipeline of anti-cancer therapies, including next-generation product candidates such as bb2121 and liso-cel.

That said, there are concerns that regulators might nix this deal -- or perhaps force some key asset divestitures -- over drug pricing concerns. As such, Bristol's stock may continue to struggle until this proposed megamerger actually comes to fruition.