Please ensure Javascript is enabled for purposes of website accessibility
Log In Help Join The Motley Fool
Free Article Join Over 1 Million Premium Members And Get More In-Depth Stock Guidance and Research
By Eric Volkman - Updated Apr 20, 2019 at 12:41AM

You can buy each of these beaten-down beauties with an Abe Lincoln, and have change left over.

The recent market volatility has driven down the price of many stocks and investors may be looking in the under-$5 bin for bargains. The three under-$5 stocks on my list today are all worth a look. I'm deeming them "top stocks."

Read on for more on this trio. But please heed the old caveat: Investing in beaten-down stocks in this price category carries higher-than-average risk. As such, it isn't for the faint of heart, or weak of stomach. 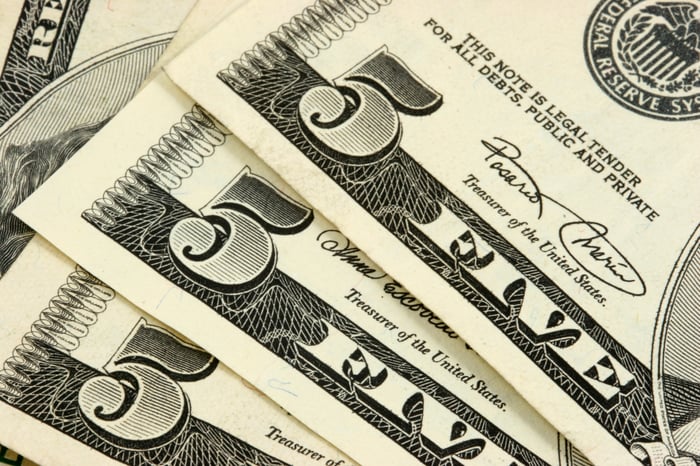 The trade war between China and the U.S. is dragging on, and it's dragging down notable U.S.-listed Chinese companies. One victim is smartphone and smart-device maker Xiaomi (XIACF 1.96%), an assertive and increasingly successful Chinese manufacturer whose foreign shares trading on U.S. exchanges trade under $5. Those shares are down 22% in the past three months.

A big reason for Xiaomi's success is pricing. Its products are notably less expensive than those of Apple or even Samsung, while they get good marks for quality. This makes Xiaomi extremely competitive in markets that are price-sensitive, and places it as a serious budget option in wealthier locales. The company has also become the No. 1 manufacturer of wearable tech in the world.

The company's approach is working. In its most recently reported quarter, Xiaomi managed to grow shipments by 21% on a year-over-year basis, while the global phone industry suffered a decline of 6%. The Chinese manufacturer delivered a mighty 49% improvement in revenue, meanwhile, and swung to a profit on the bottom line to the tune of $2.5 billion yuan ($370 million). Analysts are predicting continued growth in both metrics.

You can be forgiven for thinking that Groupon (GRPN -5.82%), which closed on Jan. 14 at $3.74 per share, is yesterday's darling among tech consumer stocks, a has-been that won't be again. It seems long ago that it was considered an innovator and disrupter in the field of merchant discounting as competition came thick and fast.

Led by ambitious management, Groupon has spent the last few years reconfiguring and refocusing its approach. Costs are being cut, while the company is moving away from its traditional reliance on old-fashioned vouchers. As a user, I find that the Groupon phone app has become a much smoother experience over time, with a more extensive and better-curated set of deals.

Any shift to a new business model is going to be painful, and Groupon's finances are taking the hit. Revenue has slumped on a year-over-year basis for 11 quarters in a row, while profitability remains elusive. Yet the company's cash flow is well into positive territory, indebtedness is manageable, and its global user numbers are creeping up. This company is far from a has-been, and I think we'll see more improvements.

It's an article of faith that the price of gold rises in uncertain economic times. Our present day, with gold prices rising while trade battles and recessionary fears deepen, seems to illustrate this.

But while the price of gold has improved somewhat predictably of late, the stock of precious metals miner Yamana Gold (AUY -2.41%) has sunk. This is not a surprise, as the company saw revenue dip lower by 12% to 545 million Canadian dollars in the company's most recently reported quarter.

Much of the trouble, however, is due to operational changes as the company as waiting to get (and finally got) its much-anticipated Cerro Moro gold and silver mine in Argentina onstream, an asset that will contribute nicely to higher-than-anticipated gold production for all of 2018 (as per the company's recently revised estimates).

Complementing this is a reduction in costs. And the combination of increased production and lower expenses could be very beneficial indeed for the bottom line -- particularly if the world's economic insecurity deepens and gold's price continues to rise.