Johnson & Johnson (NYSE:JNJ) and Apple (NASDAQ:AAPL) announced a research study collaboration involving the Apple Watch, that aims to see if wearing the device can lead to earlier detection and better outcomes for patients living with Atrial Fibrillation (AFib), a heart disorder. This condition can go undiagnosed in as many as 30% of cases until potentially life-threatening complications occur.

The companies will investigate if a new heart health program and a recently developed app by Johnson & Johnson, in combination with the Apple Watch and its irregular rhythm notifications and electrocardiogram (ECG) app, can accelerate the diagnosis and treatment for the more than 33 million people worldwide afflicted with AFib. This study will take place in the U.S. and focus on those age 65 years or older. 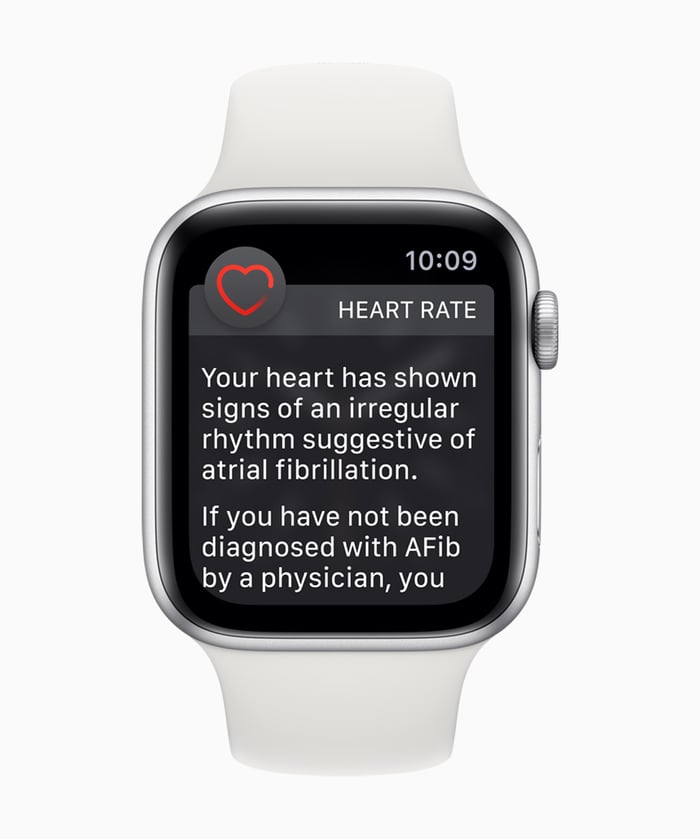 Atrial fibrillation (Afib) is the most common form of arrhythmia, or irregular heartbeat. Patients with the disorder may experience mild or no symptoms at all until the condition is severe. The result is blood clots that form in the heart, which can cause strokes, heart failure or other severe health complications.

The lack of symptoms makes diagnosis difficult, and while estimates vary, the U.S. Centers for Disease Control and Prevention (CDC) reports that between 2.7 million and 6.1 million people in the U.S. have the ailment. AFib is responsible for approximately 130,000 deaths and 750,000 hospitalizations every year in the U.S. alone.

The condition is particularly prevalent among seniors, present among about 9% of those over the age of 65, compared to just 2% among younger members of the population.

The study, which will be launched later this year, will "analyze the impact of Apple Watch on the early detection and diagnosis of AFib, and the potential to improve outcomes including the prevention of stroke." Janssen Pharmaceuticals, the drug division of Johnson & Johnson, is partnering with Apple on the study.

The most recent version of the Apple Watch, the Series 4, includes electrodes built into the digital crown (button on the side of the watch) and back crystal. Used in conjunction with the ECG app, this technology underpins the Watch's ability to test the user's heart rhythm by holding the digital crown button down for 30 seconds, classifying the heart rhythm as normal, AFib, or inconclusive. The ECG can be recorded to share with the user's doctor.

Johnson & Johnson completed an earlier study -- mSTOPs (mHealth Screening to Prevent Strokes) -- which demonstrated that earlier screening leads to increased AFib detection. The Apple Watch's ability to detect AFib could be a powerful tool in detecting a condition patients may not even know they have.

"Utilizing wristwatch-based optical heart sensor and ECG monitoring is a logical evolution of this research and may also lead to increased AFib diagnosis and improved clinical outcomes for patients," said Paul Burton, a Janssen VP. 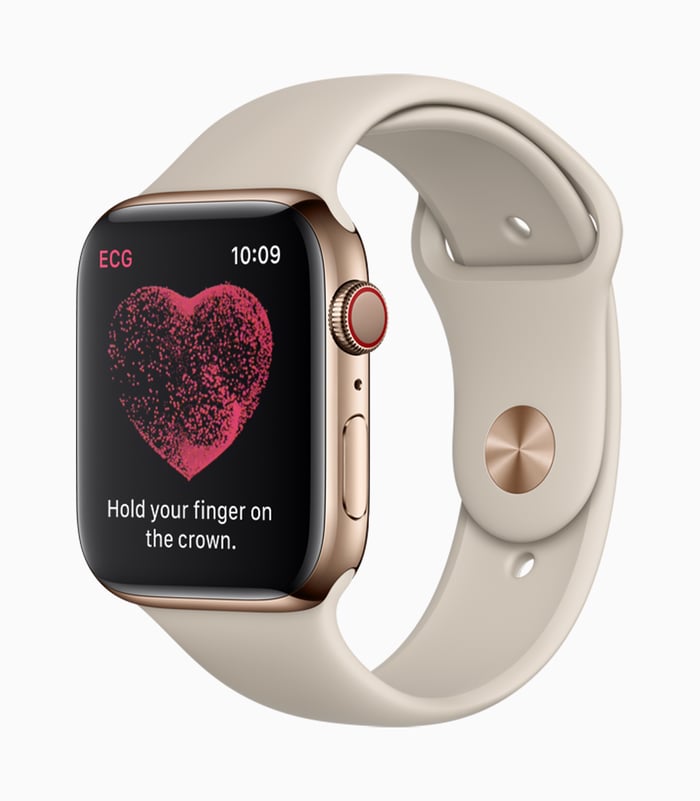 Part of a greater move into healthcare

Apple previously partnered with Stanford University to conduct the Apple Heart Study -- the largest-ever study of its kind -- enrolling a mind-boggling 419,093 participants.   The results of this research, in part, contributed to the U.S. Food and Drug Administration (FDA) clearing two mobile medical apps used by the Apple Watch -- the first tracks and detects irregular heart rhythms, and the other is the previously discussed ECG app.

Apple CEO Tim Cook has been pretty forthcoming about the company's aspirations in healthcare. In a recent interview, he said, "I believe, if you zoom out into the future, and you look back, and you ask the question, "What was Apple's greatest contribution to mankind?" it will be about health," Cook said. "You will see us announce new services this year. There will [be] more things coming," Cook said in an interview on Mad Money. "I believe it'll be material over time."

For the majority of its existence, the bulk of Apple's business has come from the sale of hardware. With the slowing growth of the iPhone as a backdrop, the company has been shifting its focus to services to drive future growth. There's no way to quantify at this point what this new direction will mean to the company's financial future, but based on Apple's track record, I certainly wouldn't count it out.