The global money-transfer specialist's stock is super cheap these days. But is good for investors?

2018 was not a good year for money-transfer specialist MoneyGram International (MGI 0.10%). A planned acquisition by China's Ant Financial was nixed after the federal government objected to it on national-security grounds.

Later in the year, the company agreed to a $125 million settlement with the Federal Trade Commission (FTC), chiefly over laxity in policing fraudulent use of its services. Forward guidance was cut significantly when news of the settlement was made public.

To no one's surprise, these incidents made MoneyGram a pariah among investors, with the share price cratering by nearly 85% during the year. The question that this brings up, of course, is whether that makes the stock a bottom-feeder buy now. Let's explore. 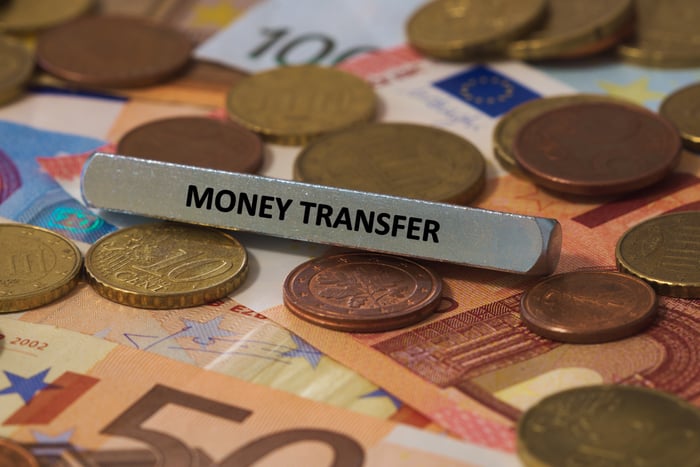 The Ant Financial ruling and the FTC settlement were both hard blows. Together they put MoneyGram on the mat.

The former really hurt, since the sale price -- $1.2 billion, or $18 per share, in cash -- was pumped up by a bidding war between the Chinese company and Euronet Worldwide (EEFT 1.80%), which had tried previously to buy the company in 2007. Anyway, Ant Financial initially offered the equivalent of "only" around $880 million before Euronet Worldwide entered the fray.

Ant Financial and Euronet Worldwide surely saw a quick way to expand by buying MoneyGram. Their potential acquisition had 2.4 billion accounts that could access MoneyGram services at around 350,000 locations around the world. Growth was in the cards, too, with the total number of global migrants (an obvious demographic for international transfer-specialist MoneyGram) rising at times precipitously during this decade.

MoneyGram probably also looked good in the wake of the then-new Trump administration's aggressive stance on immigration, particularly from south of our border. That's because MoneyGram does a brisk business in U.S.-to-Mexico remittances. The theory was that these would rise in the wake of a tougher immigration regime.

The company's results indicate this hasn't happened. Revenue dropped both sequentially and on a year-over-year basis in the first three quarters of fiscal 2018. The company's most recent (Q3) tally of $347 million was well below the peaks that occurred shortly before Trump took office. Compounding this, a raft of smaller competitors are always biting at the heels of established operators like MoneyGram.

When MoneyGram is profitable, its margins are thin -- after all, international money transfer is a volume business. Companies in this segment have to make their services attractive enough to win customers, while ensuring that the agents involved in the transactions get a small cut of the payments for their work.

This doesn't leave a lot left for MoneyGram's pocket, and the FTC settlement won't help. Concurrent with announcing its deal with the regulator, the company revised its estimate for a full-year fiscal 2018 annual revenue decline to roughly 10% from the previous projection of 4% to 6%. MoneyGram also now believes EBITDA will come in about 15% lower on a constant-currency basis (former estimate: 8% to 10%).

Leave this one at the altar

At the beginning of fiscal 2018, MoneyGram launched its Digital Transformation Initiative, an attempt to move much of its business onto various e-platforms. This feels late to me, since many other corners of the finance business spent heavily on digital assets quite some years ago, and no longer require major initiatives to get there.

Technology isn't the company's top issue, though. The declining revenue numbers indicate that it's struggling to stay relevant in an era when an increasing number of e-payment or m-payment solutions -- Venmo and the like -- are becoming commonplace and popular. More than a few of these can affect the cross-border payments that are MoneyGram's bread and butter.

In the end, I've all but answered my question. MoneyGram is a struggling company that -- absent a richer partner -- will be going it alone in a segment that's getting more competitive. And it's a low-margin operator, by nature, burdened in the near term by a big invoice from the Feds that's coming due. This stock wouldn't be a buy for me, even as cheap as it is now.