Some believe that such a move from the social media giant is long overdue.

For years, Facebook (META -0.17%) has been a pioneer in social media, bringing billions of users together across the globe. Along the way, Facebook has become a huge business, attracting advertising revenue from those seeking to reach its huge audience.

In the past, when companies reached the point at which they were generating large amounts of free cash flow, they'd often seriously consider starting to pay a dividend. Facebook hasn't yet made the move to pay one, and some think that it should reward its shareholders with dividend payments. Below, we'll look to see if Facebook will make 2019 the year in which it makes its debut in the dividend-investing universe.

Tech companies have historically been slow to start paying dividends, and with Facebook having gone public in 2012, a seven-year history without dividends is far from unusual. It usually takes a long time for newly public companies to gain traction in their respective businesses, and in the technology sector, it can take even longer to establish yourself as a major player in the industry.

Facebook, however, is far from a typical company. When it did its IPO, Facebook was already the dominant player in the social media space, and it was already consistently profitable. Although the company did take steps to bolster its position by investing profits back into its business and making key strategic acquisitions, Facebook's earnings and free cash flow have kept growing over time. As you can see below, net income has jumped tenfold or more in just the past five years, and free cash flow has shown similarly impressive gains. 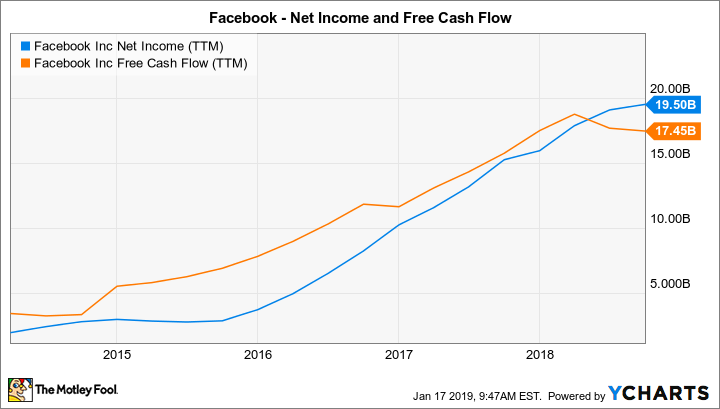 Moreover, Facebook has built up an impressive war chest of cash on its balance sheet. As of its most recent quarterly report, combined cash and short-term investments were above $41 billion, up from just $11.2 billion in 2014. That shows that even if Facebook intends to make another acquisition similar in size to its $19 billion buyout of WhatsApp in 2014, it wouldn't put a dent in its available cash flow.

It took a long time for Facebook to consider returning capital to shareholders in any form. But the dam broke in late 2016, when the social media giant's board created a stock repurchase program, authorizing up to $6 billion to go toward stock buybacks. Facebook used about $2 billion of that money on buybacks in 2017, and during the first nine months of 2018, it accelerated its repurchase activity pursuant to an expanded authorization, spending more than $9 billion to buy its own stock. In December, the company made its latest expansion to its buyback program, putting in another $9 billion.

Yet some investors still aren't satisfied. The benefit of dividends for investors is that they tend to be more reliable than stock buybacks. Companies tend to buy back stock in large chunks when money's most readily available, and those repurchases can disappear during tough times. Companies are more reluctant to cut dividends, and so shareholders can be more confident with a solid dividend than with buybacks -- even if they amount to the same amount of capital returned to investors.

If Facebook were to commit to a $9 billion annual dividend, it would immediately become one of the top dividend payers in the corporate world. The resulting payout of $3.75 per share on an annual basis would give Facebook an above-average dividend yield of 2.5% -- and more importantly, it'd send a signal to investors that the social media giant thinks it's here to stay, regardless of the controversies it's faced recently.

With the drop in Facebook's stock, buybacks seem like a prudent use of capital. But if the shares begin to soar again, then Facebook will see more pressure to use dividends instead in order to reward its shareholders. Depending on how 2019 goes, this year might not be too soon to expect that scenario to play out for dividend investors.