Investors in Wells Fargo (WFC -1.30%) have had to deal with an extraordinary amount of controversy in recent years. The bank was once known as one of the most successful major financial institutions in the U.S., but numerous problems, including the notorious fake-account scandal, have done what many think could be irreparable damage to its reputation.

During the financial crisis in 2008, Wells Fargo had to cut its dividend dramatically. Since then, the bank has worked hard to restore its dividends, and it's done a good job of getting its payout back to more typical levels. Yet problems remain, and it's unclear whether restrictions on the bank will hold it back to a great enough extent to force Wells Fargo to stop its growing streak of annual dividend increases. Below, we'll look more closely at Wells Fargo to see if a 2019 dividend increase is in the cards.

Wells Fargo has a long and illustrious dividend history. The bank used the dividends from its Norwest acquisition in the late 1990s as the source for its early payments, and shareholders enjoyed steady growth in the amounts they received from the bank for decades. In 2003, Wells Fargo made a big boost to its dividend, setting a higher level from which regular increases occurred thereafter.

That all changed when the financial crisis struck in 2008. Bailouts ensued across the banking system, and Wells Fargo made an 85% dividend cut in 2009. But it only took a couple of years for Wells Fargo to recover, and soon it had successfully petitioned the Federal Reserve to allow it to raise its dividend back toward more normal levels. 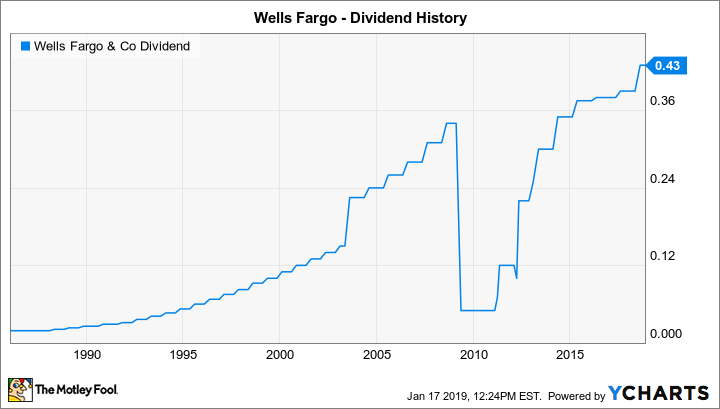 That Fed move opened the floodgates for Wells Fargo's dividends. By 2014, the bank was paying more to shareholders than it had in early 2008, and things looked bright for the company and its investors.

Unfortunately, controversy hurt Wells Fargo in the mid-2010s, and that led to a near-standstill in dividend growth. In 2016, investors got just a token half-penny boost to $0.38 per share quarterly, and 2017 brought only a minimal increase to $0.39.

Most recently, Wells Fargo has been able to be a bit freer with its cash. The company made a 10% boost to its payout in 2018, taking the dividend to its current level of $0.43 per share each quarter.

Yet the biggest handicap that Wells Fargo faces is that the Fed is maintaining a cap on the amount of assets the bank is allowed to have. The central bank imposed those limits following multiple scandals surrounding its customer-service practices. CEO Tim Sloan was hopeful coming into the new year that the Fed would remove those restrictions early in 2019, but the latest indications suggest that the limits might remain in place throughout this year.

Meanwhile, Wells Fargo is still dealing with embarrassing incidents. Between allegations surrounding falsely opened accounts, improper auto-loan and mortgage charges, and similar problems with its foreign exchange and wealth management businesses, the company has had to pay massive settlements and continues to suffer reputational damage.

Will Wells Fargo raise its dividend in 2019?

So far, the Fed has been willing to grant Wells Fargo's requests for its capital plans, which include dividend payments, despite the ongoing controversies. With earnings expected to rise at a 20% clip again in 2019, it's likely that Wells Fargo will request another boost to its payout, and the central bank is likely to grant it.

At this point, I'd predict a roughly 10% boost to Wells Fargo's dividend around midyear, with a $0.475 quarterly payment giving the bank a dividend yield approaching 4%. Nevertheless, the company will have to do more work to restore the damage that past scandals have done before its stock is able to recover fully.