No funding for the FDA means delays in drug reviews and approvals. And that could translate to bad news for these three biotechs.

So far, the U.S. government shutdown doesn't seem to have impacted the stock market. The major indexes have climbed in 2019 as the federal shutdown continues in its fifth week. But don't think some stocks won't feel pain sooner or later.

Pharmaceutical stocks could be among the first victims. Food and Drug Administration (FDA) Commissioner Scott Gottlieb said last week that his agency could soon be forced to make "hard decisions" about what functions it continues to perform. The FDA is running out of money. Critical safety functions will receive top priority for the funding that remains.

That could leave biotechs and pharmaceutical companies seeking to obtain FDA approvals in the lurch. Here's how Aimmune Therapeutics (AIMT), Amarin (AMRN -1.68%), and Celgene (CELG) could be affected by the government shutdown. 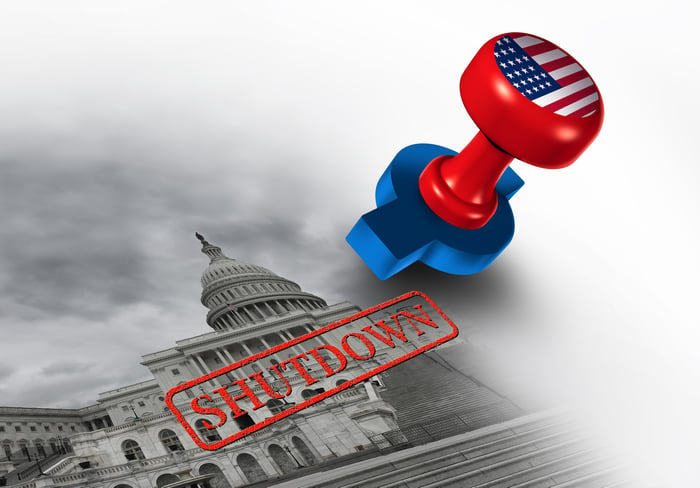 Aimmune Therapeutics has already felt some of the sting from the federal government shutdown. The biotech submitted a regulatory filing on Jan. 14, 2019, stating that the FDA wouldn't review its Biologics License Application (BLA) for peanut allergy immunotherapy AR101 until after the shutdown ends. Aimmune's share price dropped nearly 6% since then while the leading biotech exchange-traded funds (ETFs) went up.

The delayed review was especially tough news for Aimmune because the biotech doesn't have a product on the market yet. In fact, AR101 is the company's only pipeline candidate that has advanced to clinical testing. And Aimmune even submitted its filing for the experimental drug before the government shutdown began.

What are the chances that AR101 will eventually win FDA approval? Pretty good. A phase 3 clinical study found that 67% of patients treated with AR101 were able to tolerate peanut protein equivalent to at least two peanuts. The only bad news was that 14% of patients taking AR101 had to use epinephrine to address an allergic reaction compared to only 6.5% of patients on placebo. But with no therapies currently approved for treating peanut allergies, Aimmune could have a winner on its hands -- someday.

Amarin could find itself in a similar position as Aimmune Therapeutics. The biotech plans to submit a supplement New Drug Application (sNDA) in the first quarter of 2019 for an expanded label for Vascepa. If the FDA won't review Aimmune's BLA filing for AR101 until the government shutdown ends, it's likely to push a review for Vascepa back even further.

Securing the expanded label is enormously important for Amarin's fortunes. Vascepa first won FDA approval back in 2012 as a treatment for reducing triglyceride levels. The drug has been a modest commercial success in the subsequent years.

Celgene has two drugs that could be affected by the government shutdown. The big biotech announced at the J.P. Morgan Healthcare Conference earlier in January that it submitted for approval of fedratinib in treating myelofibrosis at the end of 2018. Celgene also plans to refile for approval of ozanimod in 2019 Q1.

The acquisition of Impact Biomedicines brought fedratinib into Celgene's pipeline. Celgene originally planned to file for approval of the drug in mid-2018 but delayed its plans. The FDA's funding problems could delay fedratinib reaching the market even longer.

But the bigger delay -- and bigger headache -- for Celgene is with ozanimod. Nearly a year ago, the FDA issued a Refusal to File letter for ozanimod after Celgene botched the initial filing for the drug. Ozanimod had been expected to be one of the biggest new drugs launched last year. Now, however, it's possible that the drug won't be approved until 2020 if the government shutdown drags on for too much longer.

A wall of worry?

There's no question which of these stocks could be most seriously impacted by a prolonged government shutdown. Aimmune Therapeutics has all of its chips riding on approval for AR101. However, a lengthy delay in FDA review and approval for the expanded label for Vascepa would almost certainly take a toll on Amarin as well.

Celgene investors should have the least to be concerned about. The company continues to rake in billions of dollars each year from its strong lineup of drugs including Revlimid, Pomalyst, and Otezla. But a significant pushback in the reviews for fedratinib and ozanimod would likely negatively impact the stock at least in the short term.

The federal government shutdown won't last forever, though. The FDA will move forward with reviewing the drugs in its queue sooner or later. And the chances are good that AR101, Vascepa, fedratinib, and ozanimod will all receive thumbs-up from the agency. If so, any wall of worry created by the government shutdown could present opportunities for patient investors.

Why Investors Were Giving Amarin the Cold Shoulder Today
358%